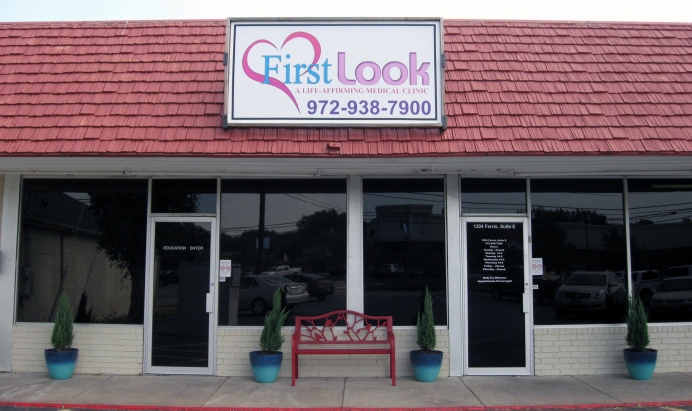 This year’s fundraising banquet for FirstLook Pregnancy Clinic in Waxahachie, Texas was an overwhelming success. With an attendance of about 400 local leaders, pastors, and faithful supporters, it was the clinic’s largest fundraiser to date.

During the function, FirstLook was able to announce that due to unprecedented growth, it would be doubling the size of its current pregnancy clinic.

Located roughly 20 miles away from a mega Planned Parenthood center in Dallas, FirstLook got its start 21 years ago during a “Life Chain” prayer event—when, the first Sunday of every October, pro-lifers from across the country stand together in their city and join in silent prayer for the lives of the unborn.

During one such event, two pastors standing side-by-side realized they had to do something more than stand on a sidewalk once a year and pray. Out of this conviction, FirstLook was born.

“We were basically a resource center,” FirstLook CEO Donna Young said. “We did the usual pregnancy center classes, pregnancy testing and abortion recovery. In 2010, we decided to become medical.”

From there, it was a swift journey to doubling in size.

“This last year we saw 610 clients. The nurses all share a converted closet with one desk and another little side desk,” Young laughed “It’s a good thing we like each other!”

Although FirstLook has managed up to this point, the need for a larger office is becoming apparent.

“We are currently about 3,000-3,500 square feet and we’re trying to double that,” Young said. “We have one exam room and two consultation rooms. We need at least one more consultation room as well as more exam rooms. It’s hard juggling appointments to fit the schedule of the rooms.”

“We have around 30,000 people (in Waxahachie), but we are the only pregnancy clinic in Ellis County,” Alisha Woodall, FirstLook’s Director of Creative Outreach, said.

In the last two years since joining the staff at FirstLook, Woodall has worked toward creating a larger online presence to reach abortion-minded women. The organization is currently working on a Google ad campaign with Heroic Media, a national marketing company dedicated to promoting pregnancy help.

After attending a Heroic Media breakfast, Woodall and Young learned how they could gear their website to a more target audience of abortion-minded women.

“It’s a landing page with a phone number on it that says ‘Call today,’” Young explained. “When they dial that number it comes straight to our receptionist. There’s a white noise and then a voice that tells her this is a call from that page.”

Through this simple service, FirstLook is already seeing lives saved.

“A woman came in thinking she was here for an abortion,” Woodall said. “She started crying because she didn’t really want an abortion but her boyfriend wasn’t supportive. She said if she had gone to another clinic, she’d be getting an abortion right then. She kept her second appointment and had her ultrasound.”

For Woodall, working with these women has been an intensely personal journey.

“I’ve been struggling with infertility for over two years and now my husband and I are hoping to adopt,” Woodall said. “I had to come to terms with that myself. God chooses different ways to draw people to Himself. For some people, it’s an unplanned pregnancy. For me, it’s not being allowed to have my own children.”

By helping save the lives of the unborn, Woodall said she realized she was also helping others in similar situations to her own. “I’m serving other couples like us who are hoping to adopt.”

Besides working on their online presence, and expanding their hours, FirstLook is also planning on building an entirely new clinic.

“Our dream is to build a new clinic that has enough space so that we can eventually have early prenatal visits,” Young explained. “We are trying to get in a new location. We’ve been talking and praying about that for a few years. Last year we presented a conceptual drawing of our dream and this year we have an option. There is a large local church that is willing to donate an acre of land with good access to build on.”

If those without vision perish, FirstLook is in no danger of dissolution.

“It seems every time you start to get discouraged, God works a miracle in someone’s life. It can even be something small and insignificant,” Young said. “It’s not about all those numbers—it’s about the individual miracles you see every day all through the day.”