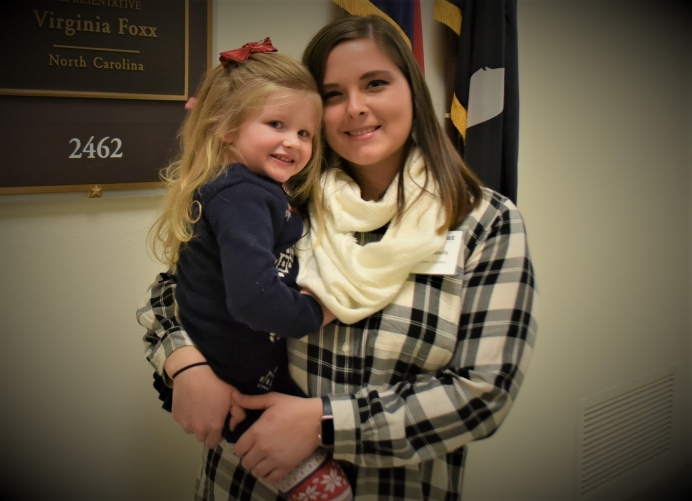 It was the summer of 2016 and Chelsea was a young college student facing a major turning point in her life: She was unexpectedly pregnant and knew she needed help.

“I remember taking so many home pregnancy tests just because I was in disbelief,”  Chelsea said. “I was so scared. I didn’t know where to go or who to run to.”

With a silent fear bubbling inside of her, she walked into Compassion Care Center in Yadkinville, North Carolina. That’s where she met Shonda Smitherman, a nurse at the pregnancy help center.

The first thing Shonda noticed about Chelsea was how quiet she was.

“She was very quiet, and still to this day, she is very quiet,” Shonda said. “When she talks, you better listen because she doesn’t talk a whole lot. But I didn’t know that about her then.”

Shonda listened to Chelsea’s concerns, noting how fearful she was of telling her parents about the pregnancy. Although Chelsea wasn’t considering an abortion, Shonda could tell she needed support to ground her in that decision.

Shonda offered Chelsea an obstetric ultrasound scan, one of many free services provided by the center. Chelsea watched her tiny baby on the screen, still quiet.

“After I saw my little baby on the ultrasound I was at a loss for words,” she said. “I had no idea what I was going to do. I had so many emotions and felt like I had no one.”

It was Shonda’s next suggestion that finally broke her silence.

“Once I asked if I could pray with her, she just broke down during the prayer and that’s when I started seeing the emotions come through,” Shonda said.

“I cried for a long time,” Chelsea said. “But I was realizing after what she said that I can get through this, and I was going to do everything I could to be the best mom for this baby.”

Shonda met Chelsea’s tears with loving words about her and her baby.

“She sat down and talked to me and explained to me that this baby is a blessing,” Chelsea said. “Even though this baby was not planned by me, God had it planned for me.”

Tweet This: “She sat down & talked to me, explaining that this baby is a blessing, even though this was not planned by me, God had it planned for me”

Those words stayed with Chelsea, as did the rest of Shonda’s encouragement.

“She explained to me that even though I was still in college and living at home, she knew that I could do this and get through this,” Chelsea said.

Shonda walked Chelsea through the process of telling her parents about the baby and reminded her that she had support.

“Shonda was actually really good to help me calm down, and just be able to actually talk to my parents and tell them what was going on so it was a good thing that I had her to talk to, to help me do that,” Chelsea said. “The hardest part for me to understand is that they will accept it eventually.”

Before Chelsea left, Shonda reminded her that she had support right there at the center.

“She let me know that she was there for me, and we ended up staying in contact, even after that day,” Chelsea said.

Indeed, the very next day, Shonda texted Chelsea to see how she was doing. Chelsea had good news: She had told her parents about the pregnancy and received a much better response than she expected.

“You could just tell the load had been lifted,” Shonda said. “That was the hurdle that she had to get over was telling them. And she said that once she told them, that they didn’t react the way she thought they would.”

With the news off her chest, Chelsea steamed ahead with her plan to parent her baby. She devotedly attended parenting and pregnancy classes through Compassion Care Center’s Jewel Program, earning points to use for maternity and baby items at the center. Among the supplies she received were maternity clothes, diapers, and wipes.

Finally, the day came in February 2017 when Chelsea’s daughter Taelynn made her way into the world. The next day, Shonda came to the hospital to visit Chelsea and her new baby.

More than a year later, as Chelsea worked on finishing her degree in medical office administration, she secured a position as an intern at the center. So great was her work that the center’s director wanted to hire her.

Chelsea graduated in December 2018, and a month later, when the center’s assistant director was diagnosed with an aggressive liver cancer, the center needed someone to fill her position.

Chelsea was just the person.

The thread that makes a difference

Since January 2019, Chelsea has been serving in the role of assistant director at the center, working as a patient advocate and overseeing the Jewel Program.

The once quiet client is now a quiet but powerful advocate, sharing her story from Yadkinville to Washington, D.C.

This January, Chelsea took her story to Capitol Hill as part of Heartbeat International’s annual Babies Go to Congress, sharing her testimony with the offices of U.S. lawmakers and attending the annual March for Life. Taelynn, who is now 3, and Chelsea’s parents even joined her.

“We got lots of pictures so when (Taelynn) gets older we’ll be able to show her pictures of being in Congress,” Chelsea said.

The journey to the nation’s capital came after several months of learning to share her story, all with the steady support of Shonda and the rest of the center.

In fact, when asked to first tell her story at the center’s banquet a couple of years ago, Chelsea asked if she could write it instead.

The director then turned to Shonda, asking her if she would read Chelsea’s story.

Eventually, Chelsea grew more and more comfortable sharing her testimony. In her current role at Compassion Care Center, she boards the center’s mobile unit weekly to share her story with other women right outside of the local abortion facility.

“It's easy for me to kind of understand more of what the clients here are going through when they come in,” Chelsea said. “So it’s easier for me to talk with them because I’ve kind of experienced myself...just being scared just finding out you’re pregnant. So that’s a good thing, where I can kind of relate to the client a little bit.”

The ability to relate is what makes Compassion Care Center’s approach to caring for women so special.

“Some clients won’t respond and others do,”  Shonda said. “And I think that’s what makes a huge difference.”

“I think the thread that kind of has made a difference with all the clients that we see is really a relationship,” she said. “Building a relationship with them and keeping in touch, letting them know, ‘Hey, I’m thinking about you. Is there anything we can do?’Just letting them know, ‘You’re not in this alone,’ and, ‘You’ve got somebody here praying for you and thinking about you.’”