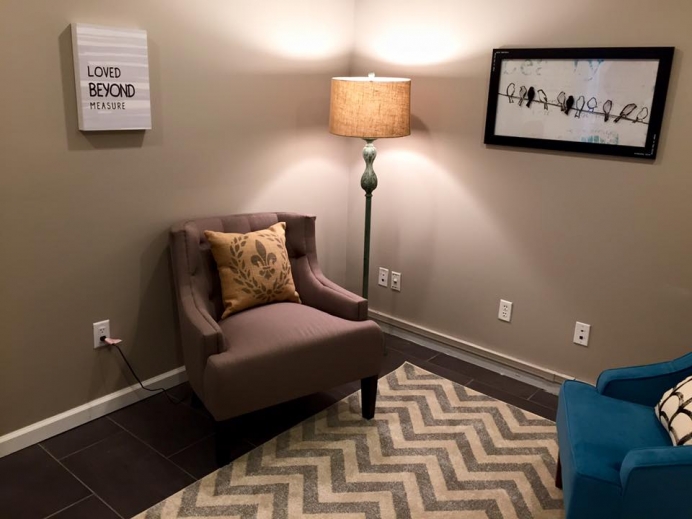 At the time, executive director Ginger Delgado said she and her team were confident God was going to use the fire for their ultimate good, as well as the good of the women they have served since 1985.

While she was sure of God’s intentions in January, Delgado had very few details on just how that plan would unfold. Today, over six months later, Delgado says she, as well as her team and supporters in the community are “blown away by what God has provided.”

That plan reached a significant milestone July 23, when Delgado and 60 of her closest friends cut the ribbon on a new facility just three blocks away from their previous location.

“I don’t want to say I can’t believe it, because I know God is great, but it’s just surreal,” Delgado said. “Six months ago, who would have ever believed? We knew God was going to provide a good place for us. I knew it was going to be good for us, but He gets to decide what is good for us, and what that means.”

Located in the Great Kills neighborhood, the new setting has allowed Pregnancy Care Center to completely revamp its look and feel, pulling off a makeover that would make "Fixer Upper" hosts Chip and Joanna Gaines proud.

The house Pregnancy Care Center called home until early January was a Queen Anne style building, which Delgado says in retrospect, felt a bit like “grandma’s house” no matter how it was decorated.

Not so with the new digs, which is adorned with the latest trends in furniture and design in a space perfectly suited for the transformation—an ideal layout for parenting classes, staff and board meetings and the like.

“When the ladies come in, we try to plant that seed that, through Christ, you have strength and dignity, and you can live life with excellence,” Delgado said. “And what better way to model that for them than with this amazing new place?”

As Delgado and her board were making preparations for the move, a friend connected her with Ashley Welborn, a local pastor’s wife who had just moved to town in December 2015.

Not only had Welborn recently helped decorate a pregnancy center before moving to Staten Island, she and Delgado immediately found they were kindred spirits when it came to the look and feel of the center.

“I said, ‘I like modern, but warm,’” Delgado said. “And her eyes just flew open, and she said, ‘Oh, you have to see my dining room table!’ Once I understood she knew what shiplap was, we were good. She was just really sensitive to the needs of the clients, but of the staff as well. It has to have form and function. It’s just really beautiful.”

Welborn is just one of several members and leaders of local churches to step up and help Pregnancy Care Center in the relocation effort over the past six-plus months.

In the immediate aftermath of the fire, which destroyed everything in the building but Delgado’s laptop, New Dorp Baptist Church next door to the center—one of several supporting churches—offered its space to store material aid like diapers, clothes, formula and strollers.

Another church group, which had come up to help out with the continued work of cleaning up after Hurricane Sandy, was redirected to help with Pregnancy Care Center, thanks to local pastor Tom Basile of Calvary Bible Fellowship Church.

“Everything from the volunteers, to the churches giving extra of their time and of their finances,” Delgado said. “Of course, afterwards there always 101 things that need to be done and that you forgot burned in the fire, so we still need computers and other important things.

“Not that we’re not working—because we’re working hard—but you just feel like you’re sitting back and just watching God work. And it’s just overwhelming. It’s crazy.”

The guests were every bit as impressed as Delgado and her staff during the ribbon-cutting July 23. Though the event was scheduled from just 10-12, the guests lingered long after the noon cutoff, quite the endorsement of Pregnancy Care Center’s new location.

With the center now open to see clients, Delgado said one of her favorite touches to the new place is a sign that hangs in the counseling room, perfectly capturing the life-saving mission of the organization.

“Any time I walk by it, it just captures my heart, and I pray that it does our clients also,” Delgado said. “It says, ‘Love beyond measure.’ Yes, we desire to save babies, but we desire for the woman to not just choose life, but abundant life through Christ. I thought that plaque said everything—you are loved beyond measure. God can give you the desire and the ability to carry a baby full-term and to create a good life for that child.”