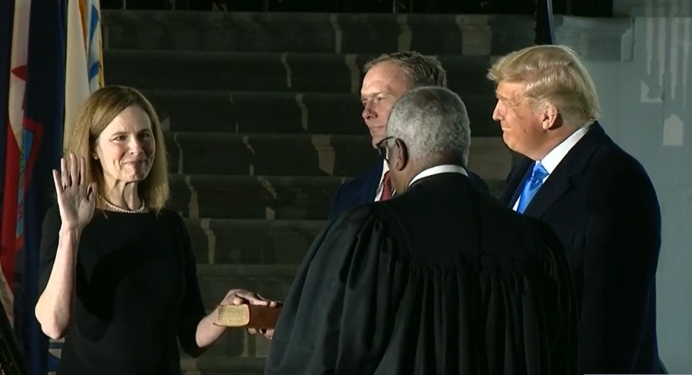 Justice Amy Coney Barrett is sworn in Oct. 26, 2020, as an Associate Justice to the U.S. Supreme Court C-SPAN screen capture

Barrett was sworn in shortly thereafter by fellow Justice Clarence Thomas, who administered the constitutional oath to Barrett at the White House’s South Lawn. Chief Justice John Roberts was to administer the judicial oath to Barrett in a private ceremony Tuesday morning, for her to officially begin work as the newest Supreme Court justice.

Justice Barrett’s confirmation as President Donald Trump’s third SCOTUS appointee one month after her nomination and a week prior to the 2020 election bolsters a conservative majority on the Court.

She faced intense scrutiny and disparagement for her Catholic faith during the confirmation process, both for her seat on the Supreme Court and in her confirmation for the Seventh Circuit Court of Appeals, to which Trump nominated her in 2017.

Barrett pledged independence as a justice upon her swearing-in Monday evening.

Separation of duty from political preference is what makes the judiciary distinct among the three branches of government, she said.

“A judge declares independence not only from Congress and the president but also from the private beliefs that might otherwise move her,” said Barrett.

“This is a momentous day for America, the United States Constitution and for the fair and impartial rule of law,” Trump said, opening the swearing-in ceremony for Barrett. “She is one of our nation’s most brilliant legal scholars and she will make an outstanding justice on the highest court in our land.”

Tweet This: “This is a momentous day for America, the United States Constitution and for the fair and impartial rule of law”

“Justice Barrett made clear she will issue rulings based solely upon a faithful reading of the law and the Constitution as written, not legislate from the bench," said Trump.

Barrett’s appointment and confirmation were welcomed by pro-life supporters, conservatives and people of faith.

The mother of seven, two of her children adopted and one child with Down syndrome, Barrett has been widely for praised her credentials, intellect and reputation.

She will be the fifth woman to serve on the court, its youngest member, the first justice to have not attended an Ivy League school and the first woman with school-age children to serve as a justice.

“We celebrate the first mother of school-age children to serve on the Court,” Godsey said, “and we celebrate her example to all women that motherhood is a nurturing of success and fulfillment, not an obstacle.”

“And as a delightful bonus, she is the first Supreme Court justice to ever serve while also being a mother to school-aged children,” added White. “To see an accomplished woman and mother earn a seat on our nation’s highest Court is inspiring and is just another reminder that motherhood and careers can (and do!) mix in this nation.”

Tweet This: To see an accomplished woman & mother earn a seat on our nation’s highest Court is inspiring & a reminder that motherhood & careers can mix

Barrett was a Notre Dame law school professor before Trump appointed her to the federal appellate court in 2017.

She had clerked for Judge Laurence Silberman of the U.S. Court of Appeals for the D.C. Circuit, and for the Supreme Court Justice Antonin Scalia, prior to returning to Notre Dame Law School to teach in 2002 and becoming a full professor in 2010. Scalia, a renowned Constitutional “Originalist” who died in 2016, was Barrett’s mentor.

Others within the pro-life community offered praise for Barrett and her confirmation to the Supreme Court as well.

“Today our nation gained a brilliant woman jurist on our highest court,” said Susan B. Anthony List (SBA) List President Marjorie Dannenfelser. “Justice Barrett’s confirmation marks a turning point in the fight to protect unborn children and mothers. The American people can now see a glimmer of light at the end of a dark tunnel, when the Supreme Court may finally return to the people the ability to enact laws that reflect their values and save lives.”

Kristan Hawkins, president of Students for Life of America, said not only is Barrett’s confirmation to the Supreme Court good news for millions of preborn babies, it's also promising for the future of the nation.

“Judge Barrett is a brilliant jurist who will bring a fresh perspective to the law for years to come,” Hawkins said.

Live Action founder and President Lila Rose said, “I am hopeful that Justice Amy Coney Barrett, when given the opportunity, will acknowledge the obvious: there is absolutely no right to kill children found in the Constitution.”

“Tonight’s confirmation of Justice Amy Coney Barrett was a highlight of the most successful four years in office for any U.S. president,” Pavone said. “Justice Barrett is a brilliant scholar and will be another vital originalist voice on the Court.”

Noting that Barrett’s name came up most frequently among pro-life Americans for candidates they would like to see nominated to fill the next vacancy on the court after Justice Brett Kavanaugh’s 2018 confirmation, Pavone said, “Justice Barrett is literally a dream that today became a reality.”