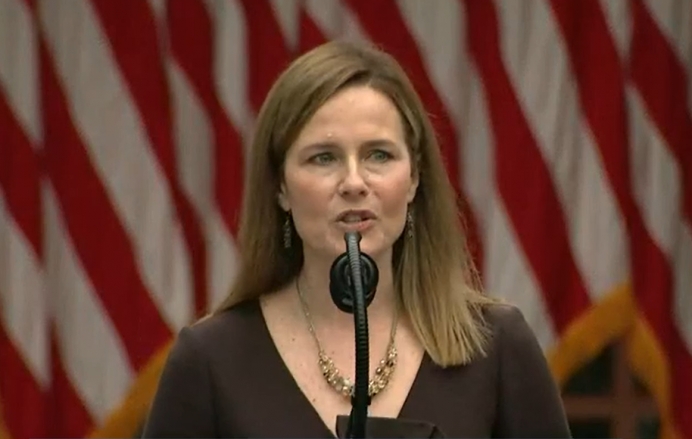 The nomination had been eagerly anticipated, with the 2020 election looming, yet another opportunity for a Trump appointee and the fate of Roe v. Wade potentially in the balance.

Barrett, 48, who has served as a judge on the U.S. Court of Appeals for the Seventh Circuit since 2017, was a frontrunner among candidates and presumed by many to be the nominee prior to the announcement.

“Today it is my honor to nominate one of our nation’s most brilliant and gifted legal minds to the Supreme Court,” Trump said, introducing Barrett in the Rose Garden. “She is a woman of unparalleled achievement, towering intellect, sterling credentials and unyielding loyalty to the Constitution.”

Barrett is Trump’s third SCOTUS nominee, following the confirmations of Justices Neil Gorsuch in 2017 and Brett Kavanaugh in 2018.

The White House said in a statement that, “Judge Barrett is known for her keen intellect, piercing legal analysis, and generous spirit,” and the Trump campaign posted a webpage detailing Barrett’s background and qualifications.

Barrett clerked for Judge Laurence Silberman of the U.S. Court Of Appeals for the D.C. Circuit, and for Supreme Court Justice Antonin Scalia, before returning to Notre Dame Law School to teach in 2002 and becoming a full professor in 2010.

She has applauded Scalia as an intellectual mentor, a report from Catholic News Agency said, and for his commitment to textualism, which holds that the Constitution should be interpreted as written.

During her acceptance remarks Saturday Barrett said she understands fully that a president’s decision in making a Supreme Court nomination is “momentous,” and that if the Senate does her the honor of confirming her, she pledged to discharge the responsibilities of the job to the very best of her abilities.

It has been 20 years since she clerked for Scalia, she said, but the lessons still resonate.

“His judicial philosophy is mine too,” Barrett said. “A judge must apply the law as written. Judges are not policy makers and they must be resolute in setting aside any policy views they might hold.”

The Supreme Court nomination was anticipated nowhere more eagerly than the pregnancy help movement, where the significance of one vote was born out in the NIFLA v. Becerra case, after a California law seeking to impose compelled speech upon pregnancy help organizations (PHOs) was overturned by the Court, and as PHOs remain under attack by abortion activists seeking to undermine their life-affirming work.

"Justice for the tiniest citizens of our country cannot come soon enough,” said Jor-El Godsey, president of Heartbeat International. “It is important for the U.S. Senate to quickly approve such a qualified nominee to ensure justice in our laws, in our elections, and in the cases already before the Court.”

Barrett is the mother of seven, including two adopted children from Haiti and one child with special needs. She and husband Jesse, also a lawyer, live in Indiana with their children.

If confirmed, she will be the youngest justice and the first woman with school-age children to serve on the Supreme Court.

Barrett told the White House Rose Garden audience that, “Our children are our greatest joy.”

Heartbeat International General Counsel Danielle M. White said, “In Amy Coney Barrett we will finally see an example on our nation's highest court of one the millions of women in our country who our media loves to pretend simply do not exist: women who care about the Constitution, who care about the values of life, liberty, and the pursuit of happiness, and who believe that these words apply not only to a subset of our citizens, but to each and every one, born and unborn.”

“Barrett is a living example of what the pregnancy help movement believes,” White said, “that women need not pit their futures against their children but can be successful both professionally and as mothers.”

White added that, “Barrett will be a justice that will view the constitution the way the founders intended, and we urge the Senate to confirm her quickly.”

Fr. Frank Pavone, National Director of Priests for Life, praised President Trump’s selection of Barrett, noting that Trump had promised “to appoint pro-life judges and those who apply the Constitution and laws rather than their own opinions.”

“President Trump has chosen an absolute all-star in Judge Amy Coney Barrett to serve as our nation’s newest Supreme Court justice,” said SBA List President Marjorie Dannenfelser. “Amy Coney Barrett is a brilliant jurist in the mold of the late Justice Scalia, and President Trump could not have made a stronger selection to fill this Supreme Court vacancy. We have full confidence that the pro-life Senate majority will move swiftly to confirm her before the election.”

“We are encouraged by this choice,” said March for Life President Jeanne Mancini, “as Judge Barrett is a judge of impeccable qualifications, who seeks to uphold the dignity of the most vulnerable, and who will interpret the Constitution as it was originally written.”

“With this nomination, President Trump, just as he did by nominating Neil Gorsuch and Brett Kavanaugh, is fulfilling his promise to strengthen the integrity of our Supreme Court,” Mancini said. “This time, the Senate has the opportunity to confirm another trailblazing woman to fill the open seat—and quickly.”

Live Action founder and President Lila Rose tweeted, “Amy Coney Barrett will be an inspiration to a whole generation of women.”

Rose then listed Barrett’s attributes: “Fiercely devoted to her marriage. To her children. An adoptive mother. A mother of a child with special needs. A friend to many. A brilliant academic. An excellent jurist,” before concluding, “Our next Supreme Court Justice.”

Students of Life of America President Kristan Hawkins said, “One hundred years ago, women fought for the right to have a voice and a vote, and now, Judge Barrett’s nomination to the Supreme Court represents a tremendous accomplishment for all of us who have worked to make our voices heard.”

“She will be a judicial role model for the next generation,” Hawkins added.

Barrett had been placed on to Trump’s list of potential future Supreme Court nominees in the weeks following her 2017 confirmation to the Seventh Circuit Court of Appeals, according to the CNA report, and also rumored to have been among the finalists to succeed Justice Anthony Kennedy upon his 2018 retirement.

A tough confirmation process for Barrett is expected, with Republicans favoring a prompt confirmation, Democrats fighting to hold off on filling the SCOTUS vacancy until after the election, and the rancorous, partisan process for Justice Brett Kavanaugh in 2018 in the not so distant past.

Barrett has already faced intense media inspection and disparagement for her Catholic faith, recently and during her 2017 confirmation hearing, when Sen. Dianne Feinstein (D-CA) grilled her on her faith and values.

Feinstein had told Barrett that, “when you read your speeches, the conclusion one draws is that the dogma lives loudly within you. And that’s of concern.”

More recent media criticism has also centered Barrett’s Catholic faith, including the size of her family, along with questioning specifics around the adoptions of her two children from Haiti.

Barrett said during her nomination remarks that the institution of the Supreme Court belongs all Americans, and if confirmed she would assume the role to serve the American people, pledging to, “Meet the challenge with both humility and courage.”