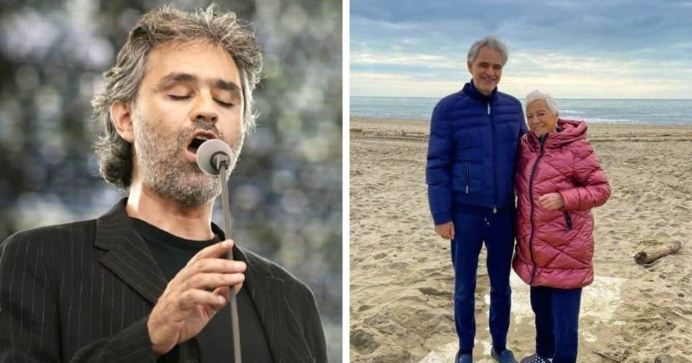 (Right to Life UK) Ahead of Italian Mothers Day on 8 May, award-winning singer Andrea Bocelli shared a touching musical tribute to his mother Edi, who refused doctors’ advice to abort him when they discovered he may be born with a disability.

Bocelli shared the video for his cover of the track “Mamma”, a popular song originally recorded in 1940 and which featured on Bocelli’s 2008 album “Incanto”.

Bocelli was born in 1958 in Lajatico, Tuscany.

Future world-famous musician and opera singer Bocelli experienced issues with his sight from infancy and was eventually diagnosed with congenital glaucoma, a condition that impacts the development of the angle of the eye. Bocelli became completely blind aged 12 after an accident during a football match.

Bocelli wrote, “She who, through divine grace, lives the generous mystery of birth, the sacred plan of giving shape and consciousness to clay”.

In 2010 Bocelli released several inspirational videos in which he described his mother’s brave defiance of doctors’ advice to abort him, and praised her for making “the right choice,” and saying other mothers should take encouragement from the story.

In a video, the singer tells the audience a story about a young pregnant wife hospitalised for what medics assume is appendicitis.

“The doctors had to apply some ice on her stomach and when the treatments ended the doctors suggested that she abort the child. They told her it was the best solution because the baby would be born with some disability”.

He went on, “But the young brave wife decided not to abort, and the child was born. That woman was my mother, and I was the child. Maybe I’m partisan, but I can say that it was the right choice”.

Tweet This: "The young brave wife decided not to abort, and the child was born. That woman was my mother, and I was the child" - Andrea Bocelli

He said he hoped the story could encourage many mothers in “difficult situations” but who want to save the life of their unborn child.

Right To Life UK Spokesperson, Catherine Robinson, said: “It is wonderful to see such an esteemed artist as Andrea Bocelli use his platform to fearlessly speak out on his own pro-life views, and celebrate the strength of his mother’s character who chose the life of her child over doctors’ advice. If only more celebrities such as Bocelli were willing to speak out for the truth – that unborn children do not deserve to be aborted simply because they may have a disability”.