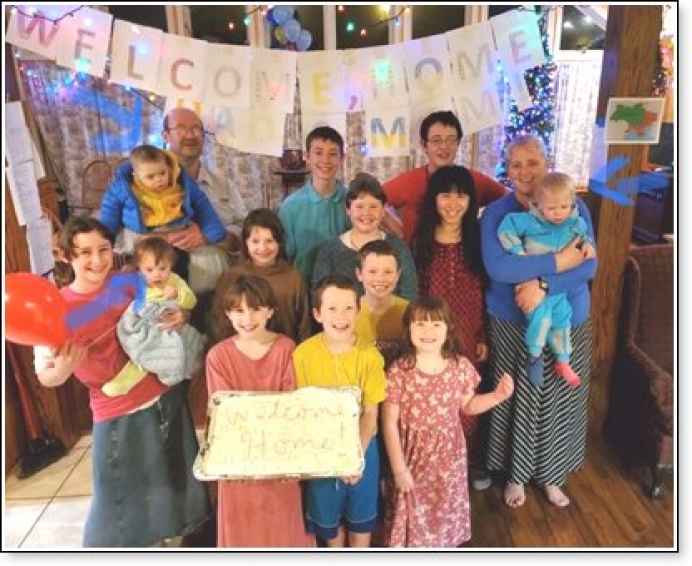 (Renew America) Earlier this year, I featured the story of the Darnowski family and their efforts to adopt two children with special needs from Ukraine.

As it turns out, they adopted three children with special needs from Ukraine after a months-long “joyous ordeal.” The Darnowskis are now a family of 15—parents Adele, Doug and 13 children. The three additions are Yuri, Piotr and Elizaveta. A photo of them can be seen below. (Adele and Doug previously adopted Therese, a child with special needs from China.)

Adele and Doug kept friends in the loop of the rigorous international adoption process –which required two trips to Ukraine from their home in the Midwest –through social media.

When the children were finally in their custody, Adele wrote:

I was sitting there with Doug in the car with the three little cuties, and the psalm came to me: When the Lord delivered Zion from bondage, it seemed like a dream. On our mouths, there was laughter on our lips, there were songs. I couldn't really think of a song right then, so I just cried a bit!

Happy tears and tears of relief – maybe that this insane venture to travel thousands of miles around the world, with money we could not normally have, to rescue three children with Down syndrome when the world is falling apart at the seams, is a sign of hope.

A sign maybe of the rescue that God might have for us if we turn to Him with all our hearts, and become humble and innocent again like these little lambs, and cry out: For the sake of His sorrowful Passion, have mercy on us and on the whole world!

Tweet This: Happy tears/tears of relief – maybe this venture to rescue 3 children w/Down syndrome when the world is falling apart is a sign of hope.

God bless them all!

Editor's note: Matt C. Abbott is a Catholic commentator with a Bachelor of Arts degree in communication, media and theatre from Northeastern Illinois University, and an Associate in Applied Science degree in business management from Triton College. In 2005 and 2006, he was among the first writers to expose former cardinal Theodore McCarrick's abuse of power with and sexual harassment of seminarians. This article was published at Renew America and is reprinted with permission.