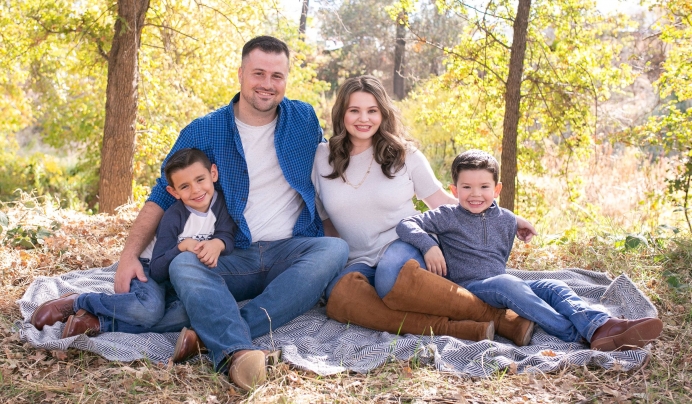 Rebekah Hagan with her husband Kramer and sons Eli on the left and Zechariah on the right.

(Human Life International) On March 22, North Dakota’s Governor Doug Burgum signed HB 1336 into law, updating the state’s medical code to help save unborn children and their parents from the tragedy of abortions.

On behalf of Bismarck’s Bishop David Kagan and Fargo’s Bishop John Folda, the North Dakota Catholic Conference had considered all legal details and urged lawmakers to pass the bill for women’s right to know that if they take the first dose of an abortion drug and change their minds, they can seek abortion pill reversal treatment (APR).

To all the sponsors’ credit, an impressive majority of lawmakers voted for the bill. First the North Dakota House had passed it by 73-16, then the Senate passed it 34-11.

After signing the law, Governor Burgum said: “If it gives hope to even one person who has started the process and wants to try to reverse it, it is worth providing that information.”

On June 25, the American Medical Association (AMA) partnered with an abortionist and the only abortion facility in North Dakota and filed a lawsuit against the state. In the complaint, AMA makes two major accusations: (1) that the law violates doctors’ constitutional rights to free speech by forcing them to declare the personhood of unborn children facing abortions and (2) abortion pill reversal treatment doesn’t work.

AMA and their abortion cohorts fear North Dakota’s law because it answers to a major legal precedent. Namely, in his 1973 opinion for the U.S. Supreme Court on Roe v. Wade, Justice Harry Blackmun wrote: “If this suggestion of personhood is established, [Roe’s] case, of course, collapses, for the fetus’ right to life would then be guaranteed specifically by the [14th] Amendment.”

North Dakota was scheduled to enforce the law starting August 1, 2019, but AMA also petitioned the United States District Court, District of North Dakota to stop it until the case goes to trial. Some so-called experts filed affidavits to help AMA, and it is distressing because medical professionals who deny the proven science of when human life begins and deny women fair warnings about procedures shouldn’t work in health care. On September 10, Chief Judge Daniel Hovland ruled in AMA's favor.

So far, however, more than 900 children and a teenager are living proof that abortion pill reversal works. Now let’s look at the case.

Tweet This: ”So far more than 900 children and a teenager are living proof that abortion pill reversal works”

Key Points of the Law

North Dakota’s 2019 medical code requires “physicians” and their “agents” to inform pregnant mothers of lifesaving opportunities, including but not limited to:

What Is Abortion Pill Reversal Treatment?

In 2006 Dr. Matt Harrison of Charlotte, North Carolina invented the abortion pill reversal treatment. The first baby saved by his treatment was born healthy in 2007.  Dr. Harrison appears in Dr. Bill Melugin's 2015 news report about another one of the babies that his treatment saved. The video news report can be accessed by clicking HERE.

Next, here is Rebekah Hagan’s testimony. She’s in the photo at the top of the page with her husband Kramer and her sons, and she is brave. In 2013 when Rebekah was 18, she was single and pregnant with her second child. Rebekah lives in the San Diego area of California and she was afraid because the father of her children rejected her and their children. So Rebekah went to a Planned Parenthood facility, took the first dose of the abortion drug RU-486, and almost killed her second son Zechariah. Rebekah’s story can be accessed by clicking HERE. Now she's a speaker who works to help save other babies’ lives. She also speaks to help save other mothers and fathers from the deep grief of aborting their children.

As Rebekah Hagan says in her speech, immediately after taking the first dose of RU-486, she didn’t want to live anymore. She grieved because she realized that March 14, 2013 would forever mark the birthday of her first son Eli with the death of his sibling, so she prayed for help and started searching the internet. She found COLFS Medical Clinics,  where Dr. George Delgado is medical director, and his office referred Rebekah to George’s brother, Dr. Luis Delgado, for the abortion pill reversal treatment.

Rebekah Hagan’s story isn’t totally unique. Like her, many young women who brought their babies into the world via abortion pill reversals are Christians who knew the biological facts that their unborn children were living persons, but at first they were afraid because the fathers of their children had abandoned them. Some were afraid to disappoint their parents too.

So I asked Rebekah Hagan what she recommends for teenagers, women and men to avoid the so-called predicament of unplanned pregnancies. Rebekah said she didn’t understand why she was attracted to her boyfriend until she took a Theology of the Body course, where she learned about God’s wisdom on marriage and the physical chemistry of sex between a male and female. “When you are in an intimate relationship, you are binding not just physically, but mentally, emotionally, and spiritually,” said Rebekah. “If I had known that my actions would have consequences, that the breakup with the other person would lead to heartache, I never would have done it.”

Thanks to generous help from her parents, Rebekah learned her lessons well. Eventually, she met her husband Kramer in 2015, they started dating in 2016, and they married in 2018. Now Eli and Zechariah have a father and a baby sister, and everyone is happy.

Dr. Delgado discovered his kindred spirit Dr. Harrison while he was writing his 2012 article "Progesterone Use to Reverse the Effects of Mifepristone" for The Annals of Pharmacotherapy, and they formed a network of doctors who offered abortion pill reversal treatments. His latest published study is "A Case Series Detailing the Successful Reversal of the Effects of Mifepristone Using Progesterone" for Issues in Law & Medicine in 2018.

In their lawsuit, AMA disputes HB 1336 with a 2017 statement by the American College of Obstetricians and Gynecologists (ACOG), which is another trade association like AMA and not a teaching college. ACOG also submitted an affidavit against HB 1336. In the lawsuit, these two trade associations and other objectors scoff at Dr. Delgado’s articles and demand so-called scientific protocols of randomized, double-blind, placebo control studies. This means they insist that some mothers suffering this emergency be given fake medicine. However, this would be absurd and cruel because the mothers seeking abortion pill reversals want to save their children’s lives. So Dr. Delgado told NPR it would be unethical, and he told HLI that he “absolutely would not” treat women this way.

The American Association of Pro-Life Obstetricians and Gynecologists explains and praises abortion pill reversal treatment: Natural progesterone has been used for over 50 years in the treatment of early pregnancies who are threatening to miscarry because the mother’s progesterone level is too low.” Furthermore, they say, “The use of natural progesterone to reverse the effects of mifepristone poisoning is a simple application of common sense in the treatment of poisonings in situations where the mechanism of poisoning is well understood. Mifepristone poisoning is well studied and well understood.”

Delgado’s and Harrison’s network of doctors valiantly saved hundreds of babies’ lives. Meanwhile, Heartbeat International did everything in their power to tell women and girls about the treatment. They are a network of 2700+ pregnancy resource centers with 1500+ in the USA, and the network exists in 62 countries.

In April 2012, Doctors Delgado and Harrison stopped running their network, handed it over to Heartbeat, and became medical advisors to the charity, which was renamed Abortion Pill Rescue.

As a result, Dr. Delgado and Andrea Trudden, Heartbeat’s director of communications and marketing, told HLI that now Heartbeat has documented more than 900 babies born thanks to APR. Dr. Delgado happily added that another 150 mothers are currently pregnant.

All mothers who want to stop the abortion pill process may call Abortion Pill Rescue’s 24/7 help line 1 (877) 558-0333 or visit www.AbortionPillReversal.com.

There are numerous articles about happy mothers who saved their babies with abortion pill reversal treatment.

You can see photos of a young woman, her son Zeke, and her husband in "Emily's Story" by Heartbeat International’s web magazine Pregnancy Help News. See many other photos and stories there such as former U.S. Marine Shashana and her son in "Woman Finds Hope and Help With Abortion Pill Reversal: Gives Birth to Healthy Boy."

In the Denver Catholic, read in "Abortion Interrupted" about Kim, who raves about Dr. Edwin Anselmi as “amazing” and “kind, loving, and gentle.”

Likewise, Fox News tells the story "Pregnant Woman Chages Mind mid-abortion and did this to save her twins."

What Can You Do?

North Dakota mothers and their unborn babies need as much proof as possible to help the court see that abortion pill reversal works.

The law firm Alliance Defending Freedom (ADF) is representing Heartbeat International in the case, and they filed a motion. Denise Harle, one of the ADF attorneys, told HLI: “We would be happy to help coordinate an amicus [friend of the court] brief on behalf of mothers who have saved their babies through APR, which we believe is a compelling part of this case and a critical purpose behind the statute at issue.”

HLI has the hearing dates, which span from December 2020 to January 2021. We will notify you when ADF is ready for testimonials.

Will Chief Judge Hovland and his fellow judges embrace beautiful truth and justice? Please share this report and pray for the best.

Reprinted with permission of Human Life International at HLI.org