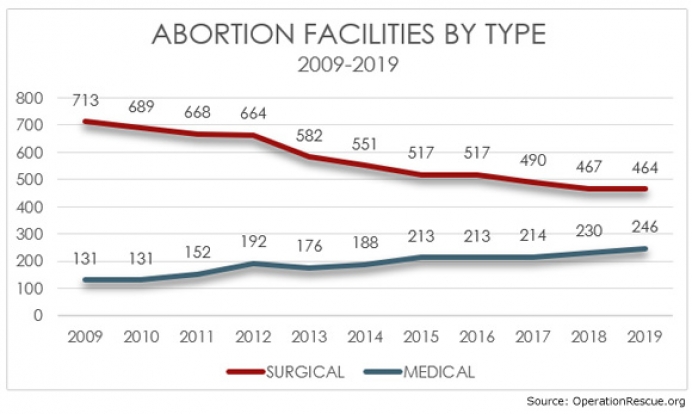 Chemical abortion is a two-pill process, the first pill mifepristone (or RU-486), destabilizes the mother's pregnancy by blocking progesterone receptors and reducing progesterone levels in her blood. That first pill is typically taken at an abortion provider's site, though illicit abortion pill sales are on the rise on-line. The second pill, misoprostol, is taken a day later to complete the abortion by inducing labor. The second pill being taken later means the mother is not at the facility, usually at home, often alone when she delivers her deceased baby - and on her own to face any complications that may occur as a result of the chemical abortion.

This process allows abortion providers to profit from chemical abortion without having to contend with post-abortion aftermath.

Operation Rescue found that the numbers of abortion facilities providing chemical abortion "have been steadily on the rise over the past decade, increasing 47 percent in the past ten years."

The report also noted that, "Planned Parenthood doubled down as a supplier of abortion-inducing drugs by opening five new pill clinics, dropping surgical abortions from five others, and adding chemical abortion availability to 14 of its centers that previously did not conduct abortions."

"Abortion businesses are desperately attempting to expand into untapped markets in order to stay solvent in a time when the overall demand for abortion has decreased," OR concluded in its report. "Profitable medication abortions have been the focus of this attempted expansion."

Tweet This: "Profitable medication abortions have been the focus of this attempted (abortion business) expansion"

Live Action's takeaways from part 1 of the OR report: