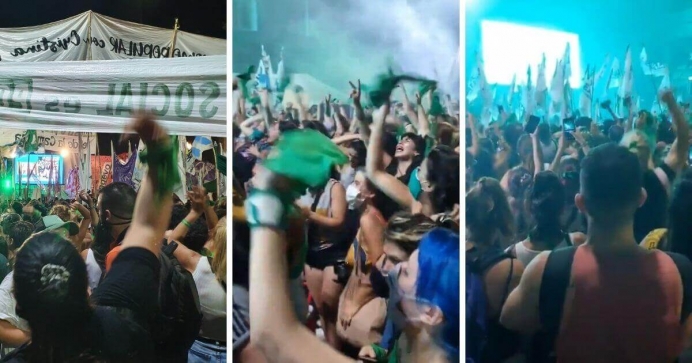 Abortion campaigners celebrate introduction of abortion on demand to Argentina

Argentina’s senate has voted through a bill to introduce abortion on demand to Argentina.

The result was announced at 4am on Wednesday [Dec. 30]  with 38 votes in favour, 29 against and one abstention.

Pro-abortion campaigners erupted into celebration outside the congressional palace in Buenos Aires when the result was announced.

The Bill was approved by Argentina’s lower house earlier this month. Argentina is only the third country in South American to introduce abortion on demand, alongside Uruguay and Guyana.

Earlier this year thousands joined in pro-life demonstrations, which according to organisers took place in across more than 500 cities in Argentina in opposition to a bill that would legalise abortion on demand.

Argentines demonstrated for the protection of the unborn and support for mothers with unplanned pregnancies. Pro-lifers have adopted the blue neckerchief as a symbol of the cause.

Participant of the Buenos Aires march and lawmaker Victoria Morales Gorleri said: “We have to solve the problem by fighting poverty and creating jobs. There are other ways to go about this, not the elimination of a life … It’s a failure for a nation to legalize the death of a human being”.

Dr. María José Mancino, president of Doctors for Life Argentina, said that “abortion is not a health problem or a priority problem in Argentina. There are many other problems that are not being considered”.

“The Senate already defeated an abortion bill in 2018 in Argentina and the people have taken to the streets now to say that we don’t want abortion. The country does not need to be divided in such a fraught political and economic climate”.

The abortion bill was titled “Regulation of access to voluntary interruption of pregnancy and post-abortion care”, and was drawn up by the ministries of Health and Women, Gender and Diversity in coordination with the Legal and Technical Secretariat of the Presidency.

The bill was fast-tracked by President Alberto Fernández who introduced the bill as part of his campaign promise. This was the ninth time that a bill to legalise abortion has been introduced.

Tweet This: Argentina has joined a long list of countries where governments/unelected officials have imposed abortion on citizens w/out popular support.

More recently, the Government in Westminster forced one of the most extreme abortion regimes in the world on Northern Ireland without the consent of the people who live there. The new regime allows abortion up to the point of birth for all disabilities, including cleft lip, club foot and Down’s syndrome.

Since the abortion regime was brought into effect in March of this year, over 719 abortions have taken place in the region.

Right To Life UK’s spokesperson, Catherine Robinson, said: “This is a tragic day for Argentina, unborn children and everyone who supports the right to life”.

“It’s also very disturbing to see pro-abortion campaigners celebrating the introduction of a law that will be responsible for the ending of tens of thousands of lives”.

“Demonstrations held earlier this year made it clear that the people of Argentina did not want abortion on this ninth occasion any more than they did on the previous eight attempts. The very large opposition that has been built to attempt to stop this bill will not be going away. Argentina now has one of the largest pro-life movements in the world and that movement will now start on the next phase, which will be the repeal of this inhumane law to ensure full protection for the unborn child is restored to Argentina”.