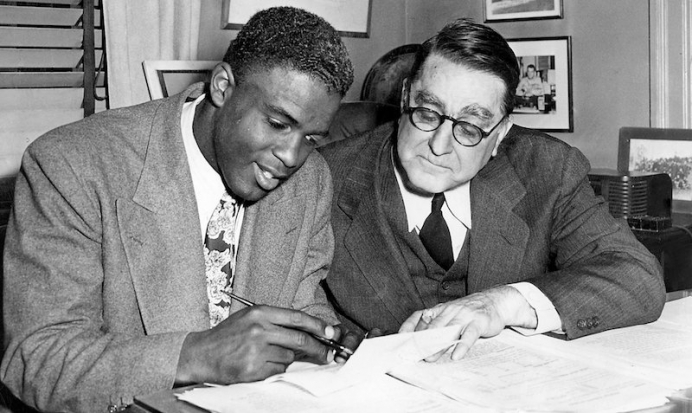 "42 Faith" and Our Challenge

The story of Jackie Robinson, the first African-American player in major league baseball, is well-known. Today, no player wears his number, 42, in honor of his historic achievement against a torrent of racist vitriol and even actions taken against him as he launched his career with the Brooklyn Dodgers in 1946.

The other hero in Robinson’s story is Branch Rickey, the Brooklyn Dodger executive whose faith compelled him to fight the prevailing sentiment among his fellow owners that “negroes” would never be allowed in the majors.

In the newly-released book, 42 Faith, Fox News reporter Ed Henry tells the story behind Rickey’s decisions, and the back story of Rickey’s—and Robinson’s—faith in God.

It’s a great read; I picked it up the other day and flew through the pages. Inside the book is a lesson for all of us in the Pregnancy Help Community.

The story of Rickey and Robinson’s first meeting—also portrayed effectively in the movie, 42—is the story of Rickey wanting to make sure Robinson could handle the ridicule, the taunting, the pitches thrown at his head, without fighting back and thus, derailing the entire experiment.

Henry’s book tells the story of the first meeting between Robinson and Rickey, where Rickey would play the roles of racists, playing out scenarios he knew Robinson would face, and watch for Robinson’s reaction.

After what may have been hours of grilling, Rickey acted the part of a baseball player. In the hypothetical story, Robinson tags out the player at second base and the player’s reaction is violent. “I flare,” Rickey thundered. “All I see is your face—that black face right on top of me. So I haul off and I punch you right in the cheek!”

“What do you do?!” he screamed at Robinson.

Both Rickey and Robinson passed their tests, because both understood that to successfully integrate baseball, the first player of color had to be a great player; but he also had to compete in a manner beyond reproach.

Tweet This: Lessons from @edhenry book #42Faith for the life-affirming community. #prolife @KirkWalden

If another player slugged Robinson and he fought back, both Rickey and Robinson knew that Robinson would get the blame. If a player slammed his spikes into Robinson’s ankle (Enos Slaughter did this on purpose, Slaughter would later admit), any complaints by Robinson would be met with, “Toughen up; it’s part of the game.”

There was no room for error; both Robinson and Rickey knew this.

As much as I’ve read about Jackie Robinson, I’ll never understand the persecution he faced; therefore, what follows is no apples-to-apples comparison with Jackie Robinson.

In a limited sense however, the Pregnancy Help Community faces similar challenges. If a life-affirming ministry makes a mistake, we can count on the story turning into national news. Of course, if the abortion industry sends a client out the door in an ambulance, we are told abortion is “still the safest medical procedure in the world.” (It isn't, by the way.)

If even one of our statements is not backed up by a listing of sources, we are called out as reporting “fake news,” even though it is true. And let’s be honest; even with proper sourcing, our information is questioned.

And without facts, the abortion industry claims our medical clinics are “fake,” claims our methods are “coercive” and runs to the media and state legislatures with “reports” of emotional damage we’ve somehow inflicted on women and men. But again, no sourcing other than the word of a few advocates for the abortion lobby.

Deep down, Jackie Robinson knew if he stayed the course, righteousness would—at some point—prevail. Without getting caught up in the day-to-day insults and provocations, Robinson focused on the goal: To pave the way so that all—based not on color but on merit—would one day compete on a level baseball diamond.

Jackie Robinson reached his goal. He got a level playing field and when he did, everything changed.

Our goal? A level playing field; a place where truth is honored (science, too!), integrity is valued and where the abortion industry is also asked to account for its every action.

Today, the field is not yet level. But, conservative pundits and newscasters are—like Branch Rickey did for Jackie Robinson—starting to give the Pregnancy Help Community a fair shot at the big leagues.

We are still climbing our mountain. We can see the summit now, where on top we know there is level ground.

To get to the top we must be sharper, smarter and better prepared to meet the needs of those we see. And we must climb powered by the love of Jesus Christ.

Make no mistake however; we are close. The Planned Parenthoods and the abortion lobby are doing all they can to keep us from reaching our destination because they know when we reach the same ground they are standing on, they will be no match for us.

Tweet This: #PPAct knows they're no match for the #prolife community. @KirkWalden

My word to them? When Dodgers’ manager Leo Durocher told his Brooklyn Dodgers Robinson would be joining them, not every Dodger was happy. Some signed a petition to stop the move. Durocher’s answer to the petition? “From everything I hear he’s only the first. Only the first, boys. There’s many more coming right behind him and they have the talent and they’re gonna come to play. These fellows are hungry. Unless you fellows look out and wake up, they’re going to run you right out of the ball park.”

Yes. We’re coming to play. And if they aren’t ready, we might just run them out of the ball park.