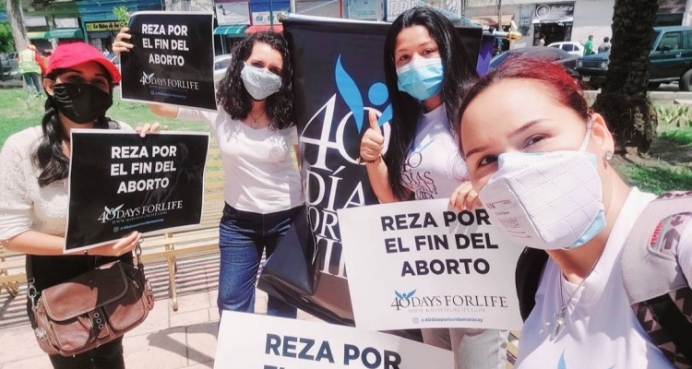 40 Days for Life sees surge in number of lives saved

The fall 40 Days for Life campaign is stepping up the stats of its life-saving success.

The popular semi-annual pro-life initiative has seen an increase in the number participating cities and the number of babies saved. And multiple local 40 Days for Life campaign leaders have witnessed parents who were planning to have an abortion change their mind when they learned that they were pregnant with twins.

The fall 2021 campaign is the largest ever with 612 cities worldwide, said Steve Karlen, Campaign Director for 40 Days for Life. The group’s reports say there has been 48% more saved babies than the initiative’s three-year average.

“Record numbers of grassroots pro-lifers are hitting the sidewalks to peacefully pray and witness for an end to abortion this fall,” Karlen told Pregnancy Help News. “That’s why we are seeing record numbers of babies saved from abortion at that last desperate moment.”

40 Days for Life is an international 40-day campaign that battles abortion at the local level via prayer and fasting, community outreach, and a peaceful day-long vigil held at abortion businesses. Campaigns are held in the spring and fall across the world.

Since the first coordinated 40 Days for Life campaign in 2007 the vigil has been held in over 1000 cities in 63 countries. 40 Days also reports 19,505 lives saved through the campaign since 2007, 114 abortion centers closed, and 222 abortion workers quitting the industry.

During the fall 2021 campaign leaders confirmed four sets of twins saved from abortion.

“When an abortion-bound woman finds out she's pregnant with twins, it would seem to double her motivation for ending her pregnancy,” Shawn Carney, president and CEO for 40 Days for Life told supporters in a report on day 22 of the fall campaign. “But 40 Days for Life vigil participants report the opposite is often true.”

“The knowledge that there are TWO beating hearts within a mother's womb often leads her to choose life,” Carney said.

Tweet This: "The knowledge that there are TWO beating hearts within a mother's womb often leads her to choose life" - 40 Days for Life's Shawn Carney

He then shared details from four local campaigns reporting that twin babies had been saved.

In Louisville, Kentucky, campaign participant Carolyn offered pregnancy help resources to a couple exiting the abortion facility there, Carney said. Carolyn asked the couple whether they’d had an ultrasound yet.

"Yes, it's twins!" the babies’ mother responded, telling Carolyn that they had chosen not to go ahead with the planned abortion.

"Praise God!" Carol, the local campaign leader said. "Carolyn was able to provide information to help them, and they went on their way!"

Carol encouraged keeping the young couple in prayer because "they had the courage and love to keep their babies."

"Today was a great day in Columbia, South Carolina," reported Mark, the local campaign leader there. "A mother came out and told us when she discovered she was having twins, she knew she had to leave!"

Also that same day at the South Carolina campaign, a woman headed to Planned Parenthood for an abortion spoke with a sidewalk counselor named Elizabeth before going into the abortion facility – and ultimately decided against abortion.

"A few minutes later, the client came back out, drove right over to Elizabeth, jumped out of her car, ran up to Elizabeth, and gave her a big hug!" Mark said. "They were both crying for joy."

"The fact that there were two made the difference," Cherry Hill campaign leader Claire shared. "[Vigil participants] speculated that two babies means two guardian angels, so they had more strength. I never heard that theory before and I like it!"

40 Days for Life vigil participants in Milwaukee learned that their prayers and support had saved a pair of twins from abortion during a 2019 40 Days vigil.

"I got to speak with the mother,” Milwaukee campaign leader Dan said, “and she thanked us 'for being there for her.'”