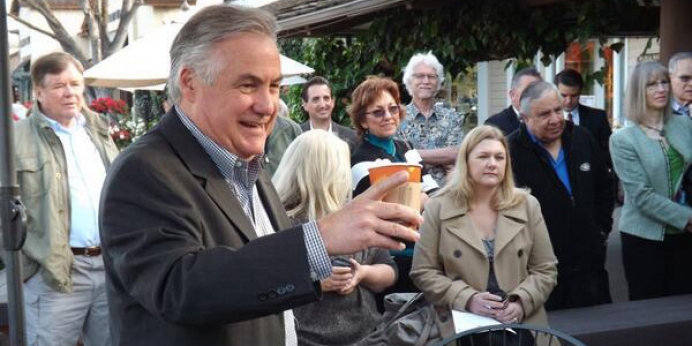 3-Time Adoptive Dad: "We look back with no regret, only joy."

Forty years ago this April, 1975, a plane carrying more than 300 passengers from Saigon to San Francisco crashed in a rice paddy just after taking off, killing 78 children and 50 adults.

The flight was the first of an assignment commissioned by U.S. President Gerald Ford called “Operation Baby Lift,” which would eventually relocate over 2,500 children to the United States as troops from North Vietnam overtook Saigon.

One of the 170-plus survivors of the flight was an 18-month-old little boy with the English-transliterated “Bashim,” printed on his wristband. Malnourished and thousands of miles from the land of his birth, the little boy arrived at the Presidio in San Francisco, where he would experience his conversion from war-torn orphan to cherished son.

That would also be the day that Jim and Sharon Patterson first became parents.

Ten years into their marriage, the Pattersons had long dreamed of adding a child to their family. So, when friends who lived next door to the Pattersons in Fresno, Calif., told Jim and Sharon about a child they were adopting from Operation Baby Lift, they turned over every rock and stone they could think of to join the adoption effort.

After days of phone calls, Sharon kept hearing the same message: An effort to adopt one of the Operation Baby Lift children was hopeless. All the children were spoken for, and there were thousands of parents on the waiting list. Resigned to the outcome, the Pattersons wished their friends well on their new addition.

But, resignation would quickly change to jubilation with a 2 a.m. phone call. As it turned out, there was one baby who was unaccounted for—a survivor of that first flight named “Bashim.”

“Sharon was just in love with him the minute she saw him,” Jim Patterson, who now represents the 23rd district in the California State Assembly, said. “She knelt down to pick him up, and he just would not have anything to do with her. He was screaming and arching his back, and all of that. That was kind of discouraging.

“Then I knelt down, and had one knee up. He just scampered over to me, put his arms around my knee and leg and just sighed. It just was divine. This was meant to be.”

Tweet This: @JimPatterson559 and family living commitment to #adoption, #prolife

From that moment on, the Pattersons were a family of three. They renamed their son, Brian James, “B.J.” for short, and nurtured him as he rallied from a severe illness that kept him from gaining weight during his first six months.

Catching Up and Adding On

In the meantime, Jim and Sharon got to work on remediating the piles of paperwork and due diligence involved in adoption. Though they were able to bring B.J. home without any up-front paperwork or a home study, they turned to a friend of theirs at Children’s Home Society of California, a local non-profit Christian adoption agency founded in 1891 that peaked as the largest private adoption provider in the world in 1968—the year after abortion became legal in California.

The friend at Children’s Home Society, who had come into contact with Jim through the Fresno radio station he owned and operated at the time, helped the Pattersons navigate the couple’s first of what would become three adoptive processes.

Five years after adopting B.J.—now married and a small business owner in Fresno—the Pattersons re-entered the adoption process through the county.

It was now 1980, and abortion on-demand had been a reality for more than a dozen years in California, and nearly a decade in the nation. When a 16-year-old girl in Fresno County became pregnant with her high school boyfriend, her mother had given her money for a bus ticket to Los Angeles and enough money to get an abortion.

Somewhere on the bus ride from Fresno to L.A., though, the thought of aborting her baby became too much to bear for the mother. She remembered a series of conversations with friends who had encouraged her that there was a better way than abortion.

Finally, she decided that instead of ending her child’s life through abortion, she would place him in the arms of an adoptive family.

That’s when the Pattersons became a family of four.

With their paperwork through the county all accounted for, Jim and Sharon got a call that a baby was available near them. As soon as they could, the couple visited the house where their new son, Jason, was staying—a foster home run by a woman who had devoted her life to caring for children.

“We went to one of the rooms, and Jason was laying up with his face to the wall in the crib,” Patterson recalls. “When we walked in, he rolled over and looked at us. It was just love at first sight. Again, it was destiny for us all.”

“Maybe you want to consider adoption.”

Welcoming Jason—now a teacher, husband and father of two—it now seemed the Patterson’s dream had come true. Meanwhile, as Jim’s career as a radio station owner was continuing to grow, he actively promoted the value of every life on air and in the community, where he helped start Pregnancy Care Center of Fresno.

Patterson also had his eyes set on a more public role in the advancement of life, leading him to serve two terms as Mayor of Fresno from 1993-2001 ahead of his current role as a State Assemblyman.

But since being “prolife without the fanfare,” as Jim puts it, remained a staple of the Patterson home, it wasn’t long before they were presented a third opportunity to adopt—this time complimenting their previous experience with international and county adoptions with a private adoption.

Their third opportunity came when a 37-year-old single woman whose father was a pastor in Oregon became pregnant. Seeking medical help in a rural community, the woman was confronted with a question she didn’t expect when she visited her doctor: “Can we help you out? Can we schedule you an abortion?”

Tweet This: Adoptive dad: "We look back with no regret, only joy." @JimPatterson559 #prolife #adoption

Despite the pressure she felt to abort, the mother-to-be left the doctor’s office and stopped in the office of a Christian pro-life doctor.

“The first words out of his mouth were, ‘Are there ways we can help you care for this baby? There are resources for you. Maybe you want to consider adoption,’” Patterson said.

Choosing life for her child, the woman deeply desired her baby to experience the love of a two-parent home. That desire led her to the Pattersons, who were asked if they would be willing to adopt a third time. By the time she was ready to give birth, the Pattersons had made the trip to Oregon by train—with their two boys in tow.

The night before she gave birth to Lindsay, the birth mother shared a dinner with the Pattersons. Twenty-four hours later the Patterson entourage was a party of five and on the train back to their home in California.

“This was our first newborn, so we were all a little concerned about how we were going to do all this, but Sharon sat up all night on the train coming back,” Patterson said. “I have this picture in my mind, we’re riding in the train, it’s in the middle of the night, the sound is clickety-clack, clickety-clack, and Sharon is sitting there with Lindsay in her arms, and she hasn’t moved since we got in the train.

“When we got home, we had so many friends who met us at the train. It was a very joyous time. We look back with no regret, only joy."

Lindsay, now married with a 1-year-old, has stayed in touch with her birth mother—now a long-time family friend with a husband and grown daughter of her own.

Pursuing a Culture of Californian Life

A rarity of sorts in California politics, Patterson has done his best to promote a culture of life in a state that increased spending on abortion by 40 percent in 2014 even while cutting all other procedures by 10 percent.

As AB 775, “the Reproductive FACT Act” made its way through both houses of the state legislature this summer, Patterson was an outspoken opponent of the bill, which he says is an “infringement upon the free exercise of religion” aimed at non-profit pregnancy help organizations that do not promote or refer for abortions.

Patterson has also leveraged his family’s wide range of experience in adoption with AB 1701, which protects babies abandoned by birth parents during the adoption process, and AB 848, which clarified the grounds for obtaining an abbreviated home study.

This summer, Patterson introduced AB 1049, which would preserve a court’s ability to weigh all facts in a case involving the termination of parental rights. He also introduced the Fetal Tissue Exploitation Act in the wake of the Center for Medical Progress’ videos uncovering Planned Parenthood’s complicity in the for-profit harvesting and sale of fetal body parts.

Tweet This: A voice of kindness to save a life. That's #prolife. That's our story. @JimPatterson559

“You’re not going to count the lives until the other side of this life, but I can tell you that our family has been the beneficiaries of I think, literally, hundreds of pro-life people who encountered the various parts of our story,” Patterson said. “When I look at my kids and grandkids, there’s wonderful joy in my heart, but in the back of my mind is the reality that Jason would have been aborted had there not been an intervention, that Lindsay would have been aborted had there not been a pro-life intervention.

“And the intervention was love, persistence, a voice of kindness at a time when somebody needed it to guide them through a very conflicting moment—and lives were saved. That’s pro-life. That’s our story.”