3 Generations Stand for Life at Pregnancy Centers and Beyond

If being “pro-life” only meant marching in protests against the Roe v. Wade decision and writing articles arguing against abortion, then Dick and Sally Hughes certainly fit the label. But because these parents of eight didn’t stop at political activism, they became the first of three generations who lived the pro-life message in an array of its varied forms.

One of the Hughes’s eight children, Debbie Eliason, recalled the way her parents handled her teen pregnancy. Unmarried and only five months from her high school graduation, Eliason said, “I don't remember a critical word toward me. They were just generous with love. Their compassion gave me compassion.”

Years later, married to her high school sweetheart, Eliason moved to Juneau, Alaska, with her husband’s road construction company. With two of her children in college and two at home, she saw an opportunity to serve a local pregnancy center as a receptionist and later as a client advocate. “I was excited to be part of it,” she said. “I had the sense that it would be a good place to give back to.”

“I knew that I would meet with people who didn't have the kind of parenting I did, so I guess I wanted to give them a taste of that,” Eliason said. “That definitely moves me in what I do, whenever the Lord opens the door.”

Doors have opened during many of Eliason’s successive moves, letting her volunteer with pregnancy centers in several states including Wyoming, where she got her first taste of Earn While You Learn classes. “I would have liked them when I was 18 in Montana,” she said. Still an enthusiastic champion of the program, she now volunteers one day a week at Pregnancy Resource Center in Clovis, New Mexico.

Yet for some of her clients, she noted, those classes aren’t enough. Having raised an adopted son with fetal alcohol syndrome, Eliason feels deep sympathy for clients who feel overwhelmed by ordinary tasks—even intake paperwork. For them, she dreams of a way to provide daily, hands-on training in parenting.

“If I had some money to leave, I would create a house where young moms and dads could come and live in community for six months, a year, two years,” she said. “They could learn to be parents there” in an environment steeped in prayer.

“Like my parents, I would like my legacy to support my kids to have that passion to embrace these young families however God leads them to do it.” 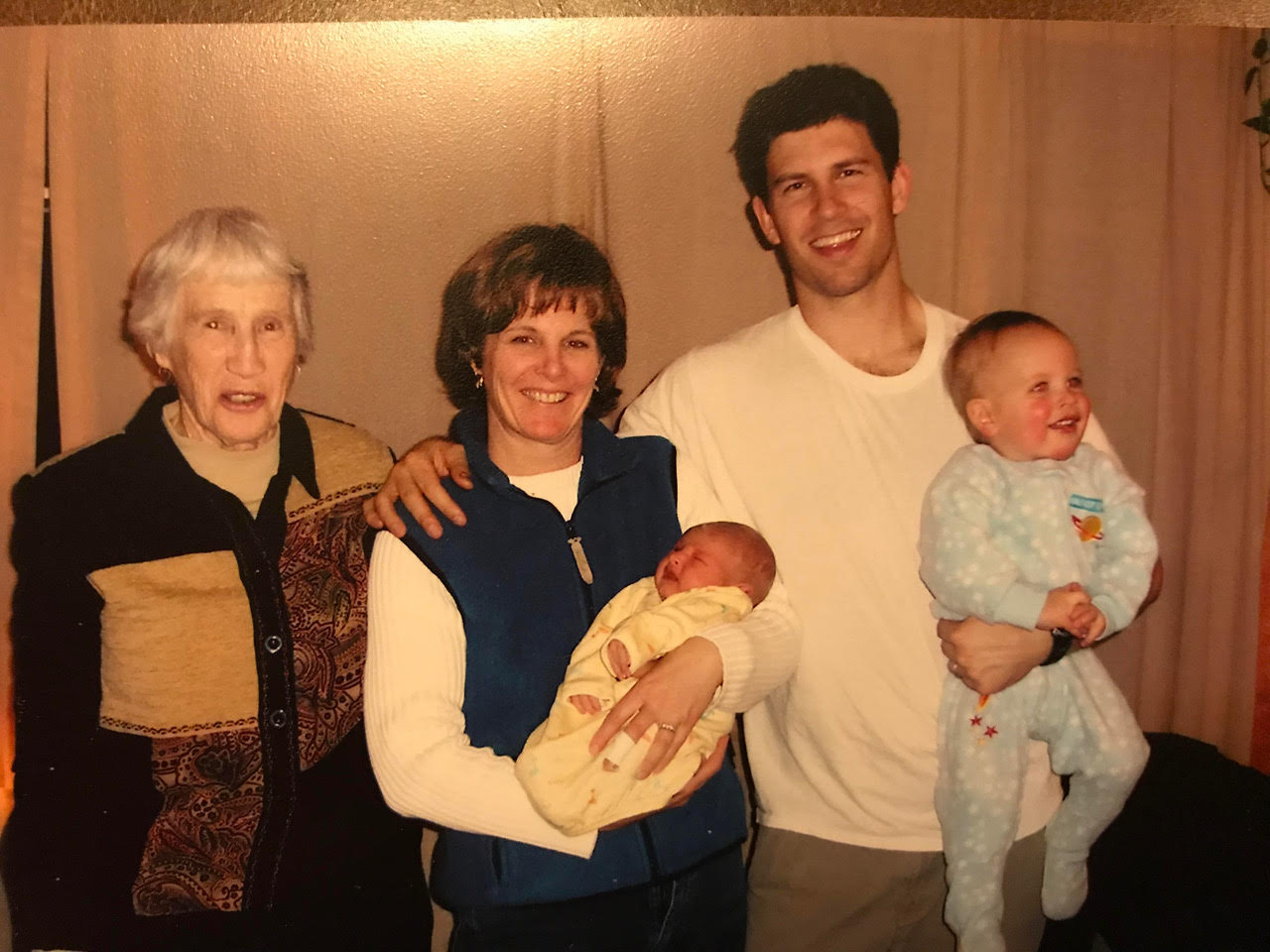 Debbie Eliason with mother Sally, son Sam and his boys Mac and Nate

For Eliason’s niece, the Hughes’s granddaughter Arica Henry-Ports, the journey into pro-life work took an entirely different route—through healing from her own post-abortive experience.

“Both my grandparents were very pro-life,” Henry-Ports said. “My grandfather wrote letters to magazine and newspapers, while my grandmother worked at crisis pregnancy centers, and I know she also did ministry in the prisons,” she said. “But as a teen I never understood the value or significance of that.”

“My life differed from that of my mother and my grandmother in that I was a product of all the statistics stacked against a young woman succeeding in life,” she said. Her single mother married when Henry-Ports was five, but then divorced six years later. In the turmoil, she said, she became rebellious and hard-hearted.

“For me, finding myself pregnant at 17 was the result of a lot of decisions I was making at that time that were self-destructive,” she said. “Abortion was the quickest fix, but nowhere in my makeup did I think it was right. I really struggled.”

In the years following her abortion, Henry-Ports drove herself hard. “I really believe that abortion caused me to feel a sense of shame, and a need to control my life and make up for that decision,” she said. Pushing herself to finish college—even through a second unexpected pregnancy—she went on to obtain a degree in psychology.

Highly successful in her field, she was named School Psychologist of the Year in 2011. But when she suffered a panic attack that same year, she knew it was time to turn her trained evaluative eye on her own life, including her relationships with her husband and three children.

“The simplest thing I wanted was for my own family to be intact and at peace, and to be more available and present in my home,” she said, a hard admission after years of deriving so much of her identity from her professional accomplishments.

Henry-Ports found the solution to her relational struggles with the help of two groups at her church: Celebrate Recovery and A Movement of Love, a post-abortive healing ministry. Examining her life in light of Scripture, she found freedom by discovering her true identity in Christ. Finally at peace with her past, she moved into leadership in the groups, offering healing to other women dealing with the same issues.

“The unfortunate part of the taboo on speaking about abortion and its effects is that, for many women, it's 10, 20, 30 years later before they're actually dealing with the damage from that,” Henry-Ports said. “I really think it affects how they parent and their choices thereafter in life. Even if they don't appear to be self-destructive there is often a lot of subtlety in which they are suffering silently.”

As she learned in her recovery groups, “You can’t heal what you won’t reveal.”

Tweet This: 3 Generations Stand for Life at Pregnancy Centers and Beyond via @kinglewrites @phc_news #prolife

Her experience of post-abortive healing, combined with her professional training, made Henry-Ports a prime candidate when Alpha Pregnancy Clinics of Northern California sought a new director for their Napa office. This February she accepted that post, 23 years to the month after ending her first pregnancy.

From her new vantage point, Henry-Ports can see that her grandparents’ legacy taught her to value both the sanctity of life as well as the importance of supporting women’s emotional well-being.

“My legacy is to build and extend beyond that,” she said. “I have a lot of desire to go back to school, specifically to write curriculum that addresses identity.” With a working outline begun, she is exploring the best way to frame a curriculum that builds healthy families by helping young people escape the undertow of identity issues that dragged her down during her teens.

Like her mother Laurie Gaines, author of the upcoming book, Choose Zoe, Henry-Ports plans to use lessons learned through personal experience, education, and now her work with the pregnancy clinic to teach and empower youth to stand strong amid a culture all too ready to view life as disposable, the unborn as a burden, and identity as negotiable.

Henry-Ports’s younger sister Jazzi (Jazmin) Milton found her own way into the pregnancy help movement, without even knowing her grandmother had worked at a pregnancy center before her.

Milton first discovered that pro-life legacy at the age of 16, when she came home from a mission trip and announced to Gaines, her mother, that God had moved her to consider working with Alpha Pregnancy Clinics at the age of 16. That’s when Gaines, who had been simultaneously prompted in the same direction, described her mother’s history of working with a pregnancy center in Montana.

Eventually both mother and daughter served with the clinics’ speaker’s bureau. Milton’s job was to cover prevention from two angles: abstinence and renewed virginity, and avoiding teen dating violence. Once caught up in an abusive relationship herself at the age of 14, Milton now went to high school campuses and women’s conferences in an effort to help others escape the same hazards.

“I love thinking about me at 14 and speaking into that person, whether that 14-year-old me is a 59-year-old woman or a 15-year-old boy,” she said. “I love being able to speak into that person and say, ‘Right now, right where you are, you can be making better decisions’—speaking some light into their life so they can choose to go a better direction.”

Milton’s positive view of people is, at its heart, a direct result of her pro-life upbringing. “For as long as I can remember, my mom has always talked about and walked in the value of life,” she said.

But her grandmother Sally Hughes had done more than care about unborn babies and their mothers. “I think the best thing about living in my mom's and grandma's legacy was that it wasn't just about pregnancy and abortion; it was all life in general,” Milton said. “They cared about all aspects of life and all people's lives. It was about every single person who was hurting.”

“Prisoners mattered as much as the unborn. My grandmother even had a little half-house on her property: her address was 920, and it was 920 ½,” Milton said. “She would actually let female prisoners that were getting out stay there so they could get their act together.

“I would even say that was prevention education: preventing people from going back to their bad habits. So the idea of doing something my grandma had done—a woman I held in the highest regard—was super encouraging. I felt like I could connect with her even though she had passed away when I was 13, by doing something she was super passionate about.”

Recently, Milton left a church staff position and reduced her pregnancy-related work to join her husband of nine months in training to plant a church in San Francisco, California. Noting that some people wonder how she will minister there, among people whose lifestyles are labeled sinful, she believes being truly “pro-life” will be one of her greatest assets.

“I think because I'm able to look at every single person as made in the same image of God that I was, it will create a safe place for people who don't usually feel comfortable in church,” she said. “We may not all be living as we should, but we all matter, we're all valuable to God, and He wants all of us in relationship with Him and having that open door to people, showing that they belong.”

As part of the third generation of her life-affirming family, Milton wants to see future generations broaden the public’s perception of what it means to be pro-life.

“I pray that my kids—adopted, biological, spiritual—have a real value for the life they come into contact with,” she said. “It just makes you treat people better if you are grateful for people. It makes you see the divine qualities in people you would otherwise not even talk to, if you value the fact that they're even a person in the first place--unborn or born.

“The main thing is for pro-life people to look at themselves and see if they really are pro-life.”