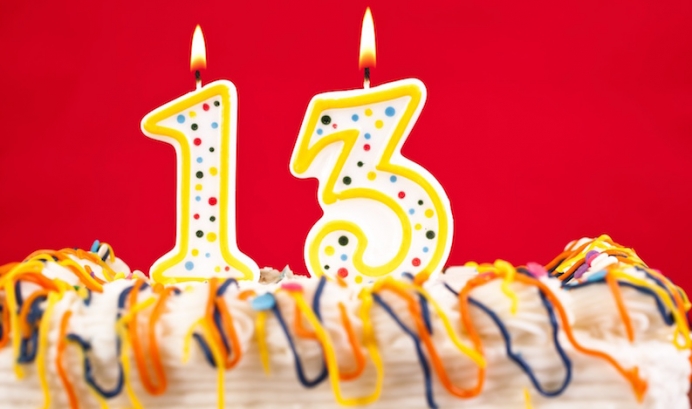 What would you give to be 13 again? Chances are, not much. Between the mounting social pressures of junior high, puberty and acne, and the increasing terror of the opposite sex, age 13 is usually a chapter we’d rather forget.

But 13 can come with its benefits as well—more independence, a growing proficiency for your favorite sport or musical instrument, even the sense of achievement that comes from memorizing 90 percent of Monty Python and the Holy Grail.

Either way, 13 is an important milestone, a coming of age, a turning point from childhood to adulthood that ends up looking much more awkward in pictures than you remembered feeling at the time (if that’s a possibility).

In 2016, a group of over 35,000 former preteens will officially cross the threshold into teendom with a common story they may not even be aware of. Every one of those teens owe their lives—at least in part—to the lifeline known as Option Line, which is celebrating its 13th anniversary in February.

“It’s incredible to think of the children who are becoming teenagers this year who may never have been if not for Option Line,” Bri Laycock, director of operations for Option Line, said. "We're here because every woman deserves love and support during an unexpected pregnancy, and it's amazing to get a glimpse at the fruit of our work."

Formed in 2003 as a joint-venture between pregnancy help networks Heartbeat International and Care Net, the 24-7 pregnancy helpline has reached over 2.35 million contacts through phone, email, live chat and—ever teen’s favorite—texting.

The goal with each caller, Laycock says, is to form a vital connection between the caller and pregnancy help near her.

“We know that in so many cases, the one thing that can open options for women is talking with another person,” Laycock, who has been on the Option Line team since late 2003, said. “That’s why we make every effort to connect callers with local pregnancy help.”

Option Line, which has been operated exclusively by Heartbeat International since 2012, answers contacts 24 hours a day in English and Spanish, and refers to 2,250 pregnancy help centers, medical clinics, nonprofit adoption agencies and maternity homes in the U.S. and Canada.

In 2006, the helpline added a direct-connect feature called “Plus Link,” free for Heartbeat International affiliates, that allows an Option Line consultant to schedule an appointment at a local center in real time. Clients keep 65 percent of appointments booked through Plus Link, as opposed to a 55 percent average of appointments kept when booking directly through a center.

Tweet This: The 1 thing that can open #pregnancy options is another person. #abortion #prolife @HeartbeatIntl

“The easier we can make it for each caller to access pregnancy help in her neighborhood, the better,” Laycock said. “Our energies have always been—and will always remain—focused on connecting callers and website visitors to pregnancy help people near them.”

A central vision of Heartbeat International’s founding generation—comprised of pro-life ob-gyns and an unsung hero of the Holocaust—Option Line has grown exponentially from its early days, answering over 243,000 contacts in 2015 alone.

While more web visitors are a strong indication of Option Line’s strength, an eye-popping 75 percent of contacts still come from phone calls.

“When people are in crisis, regardless of what the situation is, there really is no substitute for another person, another voice into their circumstance,” Laycock said. “Part of what keeps us going is the amazing stories we hear from the women who have chosen life for their children because of Option Line.”