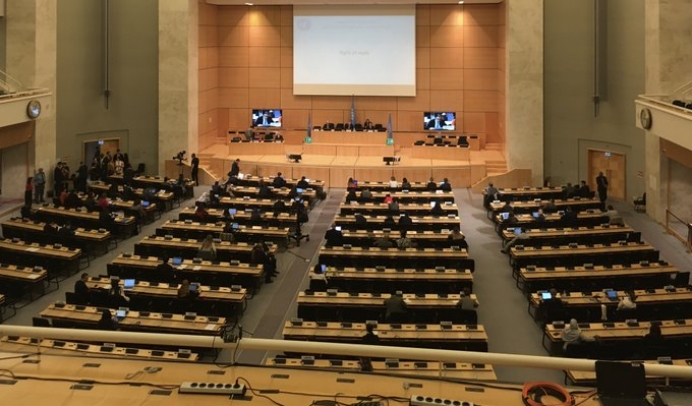 “Religious freedom, must include recognition of the right to protect life and to advocate against its termination, both in words and deeds”, the WEA says at the UN Human Rights Council.

(Evangelical Focus) The World Evangelical Alliance (WEA) read a statement during the United Nations Human Rights Council (UN HRC), calling on all States to “recognize the legal right to conscientious objection for health care professionals, related to the performance or participation in abortion”.

The statement was a response to the UN’s Special Rapporteur on Freedom of Religion or Belief’s recently published report to the UNHRC.

"The World Evangelical Alliance, on behalf of 21 organizations, takes note of the Special Rapporteur’s report, and fully supports his view that violence, coercion and discrimination in the name of religion are never justified nor should they be condoned”, the statement started.

“Religious freedom must include the right to protect life"

However, the WEA expressed its “concern at the report’s suggestion that religious individuals are engaging in harmful conduct by supporting policies and legislation that limit abortion”.

“We believe that the full recognition of religious freedom, as well as several other fundamental human rights, must include recognition of the right to protect life in the womb, and to advocate against its termination both in words and deeds”, the WEA added.

According to the evangelical entity, “no one should be forced to choose between joining the medical field to help the vulnerable and living by one’s deeply-held moral, religious or philosophical convictions, or more simply by one’s scientific ethics”.

“We are also deeply concerned by the report’s suggestion that international law may have some role in defining the doctrinal positions of religious groups regarding the role of its members”, the statement concluded.

Efraim Tendero: “We push back against attempts to limit freedom of conscience”

Bishop Efraim Tendero, Secretary General of the WEA, said (we) “find it unfortunate that we had to shift our focus from advocating against persecution, discrimination or violence, to defending the values we uphold and pushing back against attempts to shift the boundaries of international human rights law to limit the freedom of conscience and freedom to exercise our faith”.

“We also believe that justice demands laws that protect the lives of unborn children. We will continue to use our voice at the United Nations to speak up on behalf of the voiceless”, he added.

Tweet This: "We also believe that justice demands laws that protect the lives of unborn children" Bishop Efraim Tendero, Secretary General of the WEA

No medical conscientious objection in Sweden

Last year, the WEA, along with the Swedish Evangelical Alliance (SEA), defended a Swedish midwife who was denied continuation of her employment, because she refused to perform abortions.

The clinic could have accommodated the midwife’s request, but, as the Swedish government does not provide protection for conscientious objection, the case was brought to the European Court of Human Rights, where it is still ongoing.

“Sweden is one of the rare countries where conscientious objection for medical personnel unable to participate in abortions due to their convictions, is not respected”, the WEA and SEA denounced in their report to the UNHRC.

They asked the Swedish government to “respect the freedom of conscience of medical personnel, by applying a principle of reasonable accommodation with their requests not to contribute to acts going against their inner convictions and provide for the right to exercise conscientious objection”.

The UN Human Rights Council has suspended its 43rd session due to the COVID-19 outbreak, saying it will resume when conditions allow.