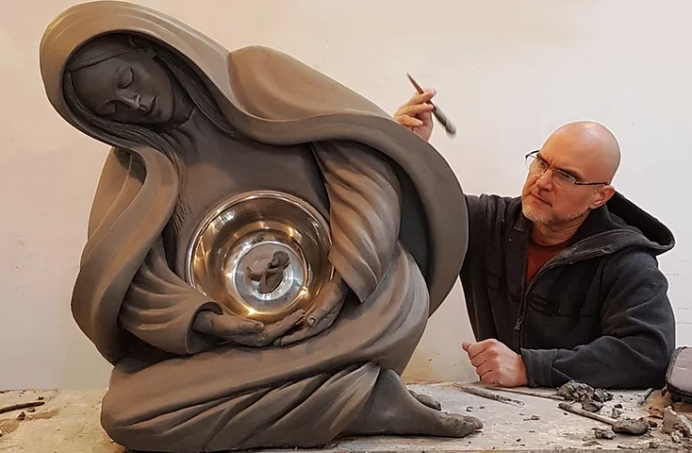 Tim Schmalz at work on the sculpture for the National Life Monument Timothy P. Schmalz

“Women hold the world in their womb”; sculpture reflects the beauty of human life

The very beauty of human life is the key to prevailing over abortion, a renowned artist says, and he’s embarked upon a project to bring that foundational beauty home to everyone he can.

“Beauty will save the world,” the famous maxim from a book by Russian novelist and philosopher Fyodor Dostoevsky, is a thought to which Tim Schmalz assents.

If beauty can save the world, it can also persuade, Schmalz says. And he hopes the message from his forthcoming mother and child sculpture will be a healing element for the world, while also reclaiming the beauty and sacredness of human life.

Timothy P.  Schmalz is a Canadian sculptor based in Ontario. His work is figurative in style, and his pieces have been commissioned and installed across the world, including historical churches in Rome and at the Vatican. Schmalz has created large public monuments for civic entities, but most of his work is spiritual in nature, and he has a special place in his heart for sculptures conveying respect for life.

Schmalz told Pregnancy Help News he uses sculpture as a form of prayer around religious holidays, and when he sculpts, he prays as each piece of clay is added.

The mother and child sculpture Schmalz is working on began as one of his numerous inspirations to celebrate life in sculpture and it has become a larger project using his art to bring a life-affirming message into numerous arenas.

“I want the focus on the beauty of life,” Schmalz said of the sculpture, “emphasis on the idea of celebrating life.”

The National Life Monument will celebrate the miracle of life and the woman at the center of that miracle via a colossal bronze sculpture depicting the mother and a world-shaped womb with the unborn child in the center.

The sculpture has an organic design that uses the drapery forms to draw the viewer’s attention to the center of the work, according to the artist’s description.

The center of the world-shaped womb area is created out of mirrored steel that reflects the surrounding world and the viewers of the art, so they will actually see themselves in the center of the work, symbolizing their personal connection to the miracle of the creation of human life.

“Every line of the piece is designed in a way to pull you into that space,” Schmalz told Pregnancy Help News. “It’s not only a sculpture of the unborn, it’s a sculpture of everyone who sees it.”

“People will literally see themselves within that womb,” he said. “You see yourself, that’s powerful. Everyone that is walking this planet came from that place.”

Tweet This: ““People will literally see themselves w/in that womb. You see yourself, that’s powerful. Everyone walking this planet came from that place”

The original Life Monument will be installed facing the Basilica of the National Shrine of the Immaculate Conception in Washington D.C. It will be located on the campus of the Theological College, which is owned and operated by the religious Society of Saint-Sulpice. Schmalz hopes to have it in place in the spring, perhaps in time for Mother’s Day. He’d ultimately like to see it and the message that life is beautiful elsewhere in the world as well.

The overall project has a two-fold purpose, one, to raise funds for the pro-life cause, and the other to put the image in places where its message is a constant reminder.

He had originally planned for life-size versions of the work to be installed in cities across America, and still does, with hopes the sculptures will be in proximity of the respective state capitols.

“To have that constant reminder, you can’t deny the reality of that, the message is always being presented,” Schmalz said.

“The idea is to get this sculpture where people can see it,” he said.

The first of these smaller life monuments will be in Milwaukee, WI, outside the historical Old St. Mary’s Church.

Pro-life marches or other events may be cancelled for now, he said, but “sculpture, in a sense, is a silent march,” so the figures will communicate the message outside of any event or season.

Schmalz has also partnered with EWTN for the commissioning of rosaries containing the sculpture. The rosaries, made by the Italian rosary, religious item and jewelry company Ghirelli, will be sold through EWTN and also benefit pro-life efforts. Schmalz recently appeared on the network to discuss the sculpture.

There will be smaller than life-sized forms that Schmalz plans to make, both for individuals to own and versions available as a pro-life fundraiser.

The smaller figures will consist of different materials; he also creates in solid resin-stone cast. These will also include a miniature size with the figure projected in solid glass, where, Schmalz says, depending on how light hits it you see different things.

It’s not often that you see sculptures that celebrate life, Schmalz notes, and this latest work celebrates the beginning of human life, the creation of humanity.

If a piece’s message is too much if a cliché, then it won’t register, he said, and this is a fine line that an artist must navigate to get that message across.

His goal, he said, is to have the most jaded, most pro-choice person say, ‘That’s beautiful.’

The art is the skin around the idea, he added, saying as well, “If I can subtly persuade people by the use of beauty then I’m doing a good job.”

He acknowledges that the task before pro-life supporters to persuade those who are cynical about life, to warm them to the idea of its sacredness is complex.

Schmalz also recognizes that abortion supporters have had to pass through a moral maze to legitimize abortion. One must travel down such a road as to arrive at a place where they are separated from their moral foundation, he observed. It goes hand-in-hand with a broader acceptance of immorality and is evidenced when it is pointed out to those who are in that position.

“If you criticize someone for what they know is wrong they get up in arms,” he said.

“Abortion is a building block of horrible morality,” Schmalz said. “Pull that out from under and people get up in arms.”

In the same way those who don’t learn from history are doomed to repeat it, he said persisting in this separation from moral foundation will serve to perpetuate destructive things like abortion.

“If we don’t know where our morality comes from, we’re bound to lose it,” he said. “And the further we drift from that, the further we have to go back to recognizing the sanctity of life.”

Schmalz emphasizes that the mother and child figure is not a protest, rather more of a dance.

“Sculpture is visual music,” he said, “that is constantly playing this beautiful song to everyone.”

“Human life and the celebration of it is not a protest - it’s beautiful,” he continued. “It shouldn’t be a reaction. The sculpture is taking the high road and that’s something we all have to do.”

Tweet This: “Human life and the celebration of it is not a protest - it’s beautiful”

Artwork, and sculpting, in particular gives form and visibility to what is often invisible, Schmalz told Pregnancy Help News.

The mother and child piece shows what is unseen – the living human being within the woman.

“That’s the best tool I can use, if I can do anything, is to help people see what is often invisible,” Schmalz said.

The woman in the sculpture can be interpreted as the Virgin Mary or as any woman. Along with life, the work celebrates women and the spiritual power they have in creating, surrounding and sheltering human life within them.

“What a compliment to women,” Schmalz said, “that they hold the world in their womb.”