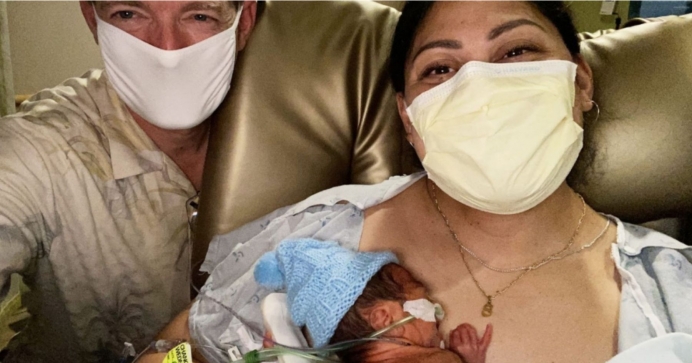 (Right to Life UK) A woman who did not know she was pregnant gave birth to a baby boy on a flight from Utah to Hawaii that happened to be carrying a neonatal medical team.

On her flight from Salt Lake City to Honolulu last week, Lavinia “Lavi” Mounga unexpectedly went into labour and gave birth to her son Raymond at just 29 weeks. Fortunately for Lavi, there were three neonatal intensive care nurses and a family physician on board.

On a GoFundMe page, one of the new mum’s sisters wrote: “Our sister did not know she was pregnant so she was just as shocked as the rest of us when our nephew was born!”

In an interview, new mum, Lavi said: “I don’t know how a patient gets so lucky as to have three neonatal intensive care nurses onboard the same flight when she is in emergency labor, but that was the situation we were in. The great thing about this was the teamwork. Everybody jumped in together and everyone helped out”.

“I went to see what was going on and see her there holding a baby in her hands, and it’s little”

One of the nurses, Lani Bamfield, recalled: “We were about halfway through the flight and we heard someone call out for medical help. I went to see what was going on and see her there holding a baby in her hands, and it’s little”.

By the time Dr. Dale Glenn responded to the emergency call that went out over the loudspeakers and was clued into the situation by a flight attendant, the nurses were already with the mother and baby.

Amazingly, because the group did not have any of their usual equipment, Dr. Glenn relied on wilderness medical training, and he and the nurses used shoelaces to tie and cut through the baby’s umbilical cord.

The medical team also made baby warmers out of microwaved bottles and used an Apple Watch to measure the newborn’s heart rate, keeping him stable for the three hours it took to land.

“She called us family and said we’re all his aunties, and it was so great to see them”

“I was literally counting down the time on my watch, between where we are in the flight to when we can get this child to Kapiolani [Medical Center for Women and Children]”, Dr. Glenn said.

“As soon as we got him on board the ambulance, we headed straight for Kapiolani. And once he arrived there, the emergency room took great care of him, moved him up to the NICU, and baby and mom are both doing great”.

Tweet This: A woman who didn't know she was pregnant gave birth to a baby boy @29 weeks on a flight that happened to be carrying a neonatal medical team

Two days later, the medical team visited the hospital to see how the mother and son were getting along.

“We all just teared up. She called us family and said we’re all his aunties, and it was so great to see them”, nurse Mimi Ho said.

Mum Lavi has been discharged but Raymond will remain in Kapiolani until he is ready to go home.

The story was captured on video by a passenger on the plane in a viral clip that has now been viewed more than 13 million times.

Right To Life UK spokesperson, Catherine Robinson, said: “These incredible stories seem to be happening more and more often and it is truly amazing that Lavi and Raymond had a highly-trained medical team at hand to help. However, stories of premature births also continue to highlight the cruelty and inconsistency of abortion law. Baby Raymond, born at 29 weeks on a plane, could have been aborted in the UK if he was known to have had a disability before birth”.