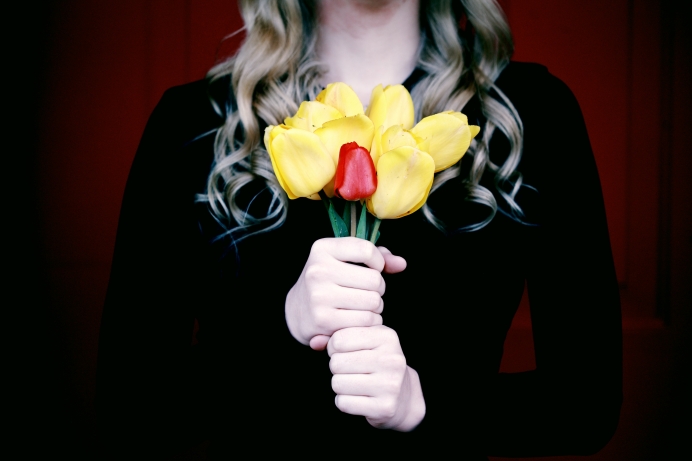 “Vicky” swiped away her tears, swallowed hard and pushed open her car door. It took every ounce of her courage to walk through the doors into that Sunday morning service.

Flashback a few months: Vicky was 37 weeks pregnant with her first child when a drunk driver struck her vehicle.

Her baby girl did not survive the impact.

Now Vicky had to endure the pastor’s affirming words for mothers and watch dozens of moms receive pink carnations as she sat next to her husband, barely able to make herself stay.

As the service concluded and Vicky turned to hurry out, a friend handed her the carnation she’d been given. Before Vicky had a chance to respond, another woman handed her a second carnation.

Then a third woman did the same.

By the time Vicky got back to her car, she carried an armful of pink carnations—a loving affirmation of her motherhood from her sisters.

This time, the tears flowing down her cheeks were tears of gratitude.

Vicky’s pregnancy loss was not her choice. However, whenever a preborn child dies in the womb, regardless of the cause, the woman who carried that child is still a mother.

No matter how much she tries to suppress it, the woman who loses her child to abortion is a bereaved mother.

Tweet This: No matter how much she tries to suppress it, the woman who loses her child to abortion is a bereaved mother.

This reality may be flatly denied by abortion advocates, who wish to use detached terms like fetus and woman and partner to describe the individuals involved in a pregnancy.

Nevertheless, whenever a human ovum and sperm meet and a brand-new human being is formed, three individuals take part in the equation: a baby, a mother and a father.

This is reality because this is the way God defines things. God, who is a Family of three Persons, created us as His image-bearers. Human families reflect His own nature.

“For this reason, I kneel before the Father from whom every family in heaven and on earth is named…” –Ephesians 3:15

Our Father—our Creator—ordained the family. Let’s look at the implications of this in light of abortion:

1.     Every human being is pre-planned and created by God on purpose from conception and even before conception (Jeremiah 1:5).

3.     By the same token, a man who impregnates a woman is already a father, long before his child is born.

Of course, for the woman contemplating abortion, it seems emotionally easier to view herself as a woman with a choice to make rather than a mother who is considering ending her baby’s life.

In the same way, the post-abortive woman dealing with guilt, sorrow and shame likely does not want to be called a mother.

Yet that is who she is.

What does this mean as we approach another Mother’s Day?

It means roughly one in four women, including those who attend church, are bereaved mothers because of abortion.

It means that, even though the pain has been buried, it may be triggered on the occasion of Mother’s Day.

Of course, even if we could attend church together, it wouldn’t be appropriate or helpful to give an armload of pink carnations to a post-abortive woman as a balm to her soul and an affirmation of her motherhood.

Her situation is more complex (and probably secret) due to the choice she made.

If her conscience is malfunctioning,  she may not even recognize the reality she denies.

If her conscience does function, signaling that something is wrong, a sense of unworthiness may prevent her from taking steps toward healing.

Thankfully, there is a third scenario.

The post-abortive woman who has found healing, peace and freedom in Christ sees herself as a shining trophy of the astounding grace of God.

She understands the beauty of the gospel. Her heart, though not free of scars, sings with praise for what God has done for her.

A woman who humbly receives God’s forgiveness for abortion is a mother who has found deep, sustaining comfort in her bereavement.

She has laid down her heavy burden at the foot of the Cross. She no longer feels driven to try to make up for her sin.

And she cherishes the assurance of seeing her child again one day.

Those of us in life-affirming work have heard the stories time and time again.

We’ve seen the power of God’s love in action. We’ve witnessed what real hope can accomplish for the human spirit.

As we approach another Mother’s Day, let us pray for the many post-abortive women who may not even be able to see themselves as mothers—women who need the healing mercy of Christ.

We come to you with gratitude for your forgiveness and mercy, which none of us deserve. We thank you for the privilege of being able to witness your grace in the lives of so many who have been set free from guilt and shame following abortion.

As we think of our moms, celebrate our own motherhood, and acknowledge mothers in general this Mother’s Day, help us not forget the many bereaved mothers who have lost children to abortion.

For those who decry and deny their motherhood, we pray for an awakening in their innermost being, and for the grace to seek Your forgiveness. For those who are tormented, burdened and haunted by guilt, we pray Your mercy would wash away shame and restore joy.

Lord, as we lovingly consider mothers bereaved through abortion, we boldly ask that You rewrite many more stories of suffering into stories of glory.

We ask this for the honor of Your beautiful name.