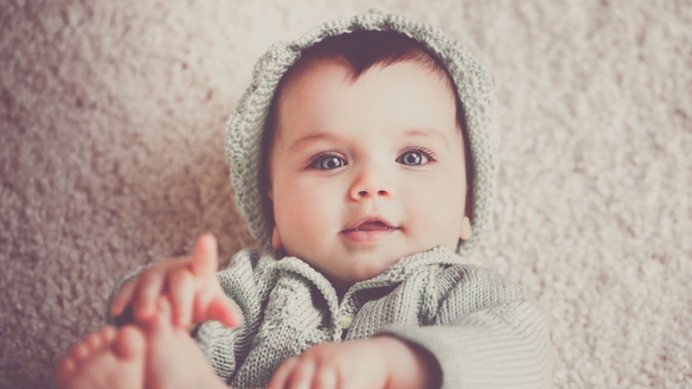 The best thing we can do to reduce abortion numbers is to advertise pregnancy help centers. This is more effective than educating people about pregnancy and abortion, changing laws, or protesting, as good as these may be. This was the case a hundred years ago, and it is true today. Ratios of abortion to live births have been falling, year after year, since the early 1980s, as the number of pregnancy help centers increased. Not many know where these centers are, however, so we need to advertise them!

Abortion Ratios Have Been Going Down

The red line in the graph below shows the decrease in abortions per 100 live births, or abortion ratios, since the early 1980s. 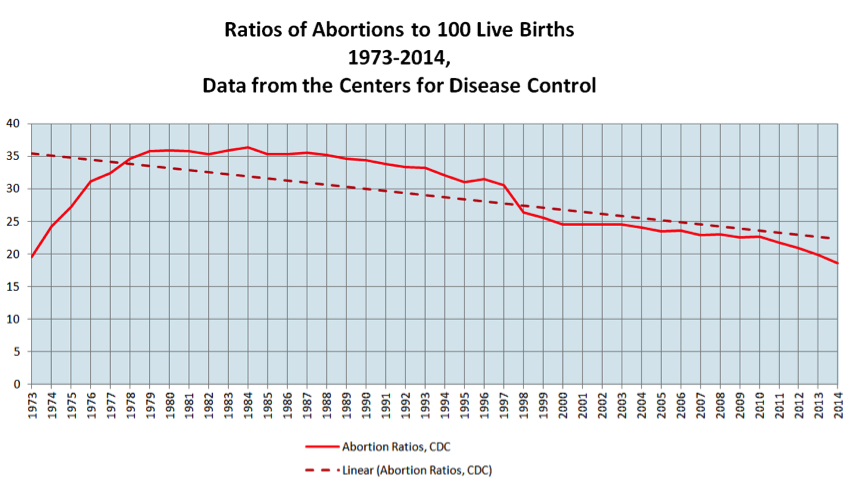 This decline cannot be adequately explained by changes in contraception use, changes in public opinion, increased pro-life laws, or a decrease in the number of abortion facilities.

Planned Parenthood and others claim that abortion ratios are down because there are fewer unintended pregnancies, and that this has been caused, in turn, by increased use of contraceptives, and of long-acting, reversible contraceptives, like the IUD. Researchers found, however, that "changes in contraceptive method choice and use have not decreased the overall proportion of pregnancies that are unintended between 1995 and 2008....” As we have seen, abortion ratios have declined from 1982 or so on, continuously. One study found that births from unintended pregnancies actually increased from 31 percent to 37 percent of all pregnancies from 1995 to 2011, when, according to the promoters, contraception should have been reducing them.

While we hear occasional good news about how “pro-life” Americans are becoming, a survey of polls by the American Enterprise Institute going back to 1973 shows that public opinion hasn’t really changed. Big minorities on each end of the spectrum are pro-life and pro-choice, and about fifty percent in the middle are muddled in their thinking, generally holding that “abortion is murder,” but “it should be up to the woman.” Those proportions haven’t changed in 40 years, and they aren’t likely to. While more Americans may think of themselves as “pro-life,” their thinking of the issues involved has not changed.

Laws that restrict abortion one way or another (e.g., requiring parental consent), or withhold funding for it, have reduced abortion numbers to some degree. The reduction, however, has not been great (estimated at under 5 percent), and changes to the laws would not continue to drive ratios lower over time. Abortion ratios, however, have been going down continuously, more than 17 percent from their highs.

Finally, fewer abortion centers has not been the reason for fewer abortions either. The number of abortion centers has gone down, but there is no direct correlation between that and the drop in abortion ratios. So, for example, between 2008 and 2011, the number of clinics in the U.S. providing abortions declined by only 1 percent, but the abortion ratios dropped over 6 percent. While Michigan had 33 percent fewer clinics in 2014 than in 2011, the state’s abortion rate increased slightly.

While abortion ratios have gone down (the red line below), the number of new pregnancy help centers has increased (the blue line). (Heartbeat International kindly provided the statistics on new pregnancy centers.)

Tweet This: Pregnancy help centers are key to lowering abortion ratios, which means advertising them is imperative. #prolife 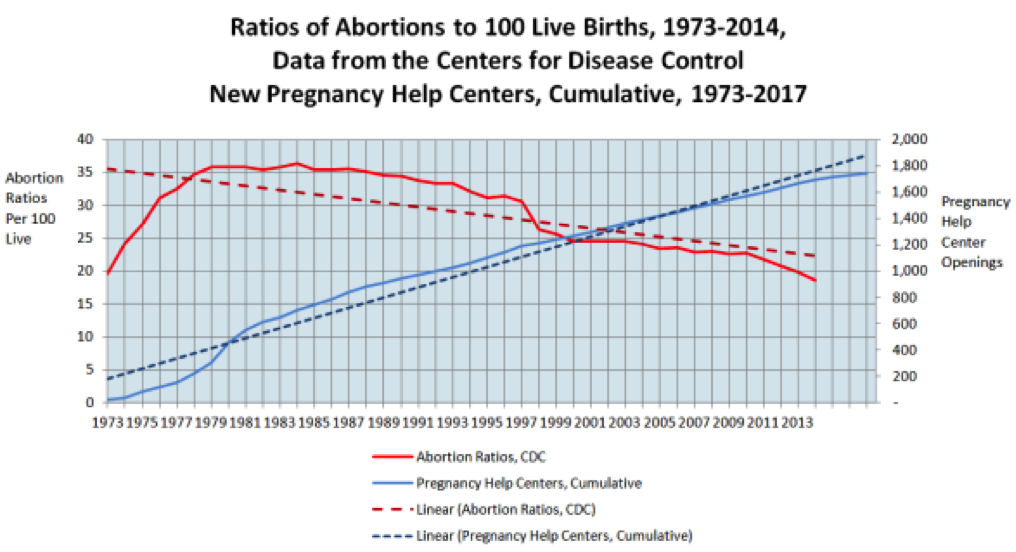 We think that pregnancy help is the best explanation for these falling abortion ratios.

According to Marvin Olasky, author of a book on the history of abortion in America, abortion rates were high—much higher than ours—in the latter half of the 19th century, but declined sharply at the end of the century and in the years following. In Olasky’s view, the most important factor in reduced abortion rates was practical Christian pregnancy help. In New York City, for example, there were at least 20 organizations in the 1890s that specifically provided unmarried pregnant women with lodging, help, and training. The largest, the House of the Good Shepherd, had room for 1,042 women. This was the story in every major city.

Pregnancy help organizations are the contemporary version of these centers. So what’s the difference between local pregnancy help centers and these maternity homes of the past? Social prominence! Everybody knew where those maternity homes were. The women lived there, and in most cases they worked there, and received training there, so people in the community for miles around knew about what was available.

In a 2014 national poll, 54 percent of women did not know that there were such centers in their communities. (There are over 2,750!) Advertising can raise their profile! Those promoting pregnancy help centers can take heart: Americans like people helping women choose life. So, in the poll mentioned above, 92 percent of women said that pregnancy help centers were “very necessary” (70 percent ) or “fairly necessary” (22 percent) in their communities.

Advertising Makes a Difference – An Example

Vision for Life – Pittsburgh, an all-volunteer 501(c)(3) non-profit, began advertising pregnancy medical centers in Allegheny County (Pittsburgh) in 2010. We advertise two medical center organizations: Choices Pregnancy Services, with centers in Coraopolis and the Mon Valley, and a mobile unit which travels throughout the Pittsburgh area, and Women’s Choice Network, with centers in Oakland, the North Side, Monroeville, and Wexford.

We currently use Google Adwords and “local search optimization” to reach young women seeking abortions, and create 15-second video ads and run them on Facebook and Instagram, to reach women who may have an unintended pregnancy, or may have a friend with one, as “friends tell friends.” More young women in Pittsburgh now know that there are places to go if they or others face an unintended pregnancy.

From 2010 to 2013 we saw abortion ratios drop 20 percent in Allegheny County, compared with an 11 percent decline in the rest of Pennsylvania. We estimate that roughly 450 more children were born because of that difference (2011–2015). Birth numbers in Allegheny County made a modest 3.2 percent increase from 2010 to 2015. We cannot prove that our advertising was the reason for the decline in abortion ratios, but we cannot think of any other cause.

Tweet This: Abortion ratios dropped 20% in Pittsburgh area in 2010-2013, thanks to effective advertising. That's about 450 babies saved from abortion! 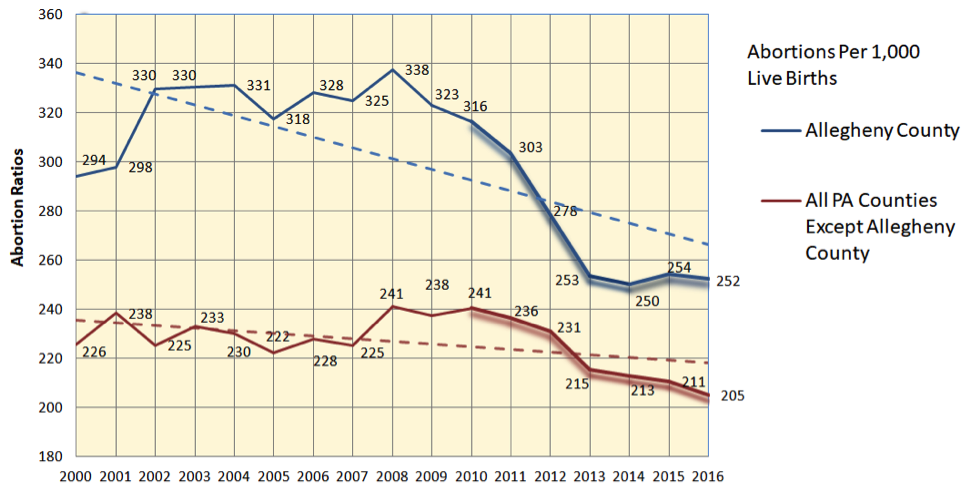 Advertising these centers, we believe, is simply the most effective thing one can do to save moms and babies from abortion, in Pittsburgh and in your community. If you run a center, pass this article on to your most engaged and generous donors, and ask them for a sit-down to discuss how you might increase your advertising directed to women at risk for abortion.

After we expanded their "local search optimization,” Women's Choice Network saw a 45 percent increase in all their numbers, which prompted Executive Director Amy Scheuring to make an appeal to their donors: Women's Choice was finding it hard to handle the increased traffic. Amy reported that she had the best response to a special appeal ever. Your donors, too, would love to have a problem like Amy's to solve.

If you run a center, invest in advertising directed to women at risk for abortion, and see your numbers increase. You can then appeal to your donors to meet whatever needs arise, and see them rise to the occasion.

Chris Humphrey has served as executive director for Vision for Life - Pittsburgh for the past nine years. He also serves on the Board of Directors for Heartbeat International. Canadian, he moved to the U.S. with his wife, New Testament scholar Edith Humphrey, in 2002. Previously he has worked as a knowledge management analyst at Health Canada, an editor with the Canadian federal government and at Saint Paul University, Ottawa, a lobbyist for a pro-life organization in Ottawa, and as a pastor in the Salvation Army and in a non-denominational church. He is also a semi-professional photographer. He and Edith attend St. Nicholas Orthodox Church in McKees Rocks (Pittsburgh). They have three daughters and 17 grandchildren.