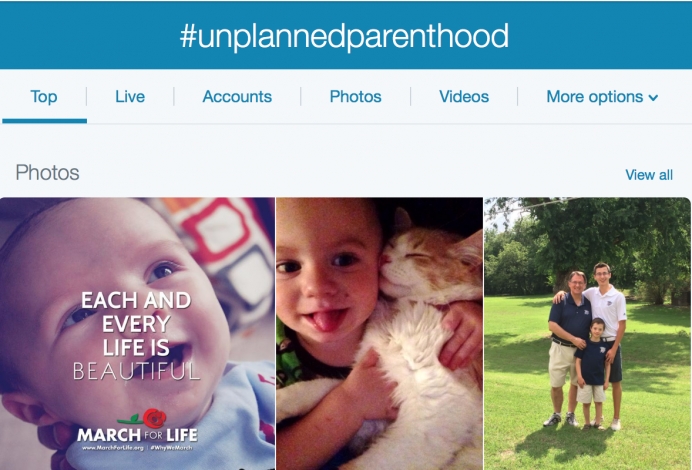 The worldwide leader in abortion’s ongoing public relations nightmare continued Tuesday with The Center for Medical Progress’s release of a third video that further exposes Planned Parenthood’s role in the trafficking of human body parts harvested while babies are in the process of being aborted.

Facing the looming specter of a congressional investigation and a push to defund the abortion giant that has gained traction in both houses on Capitol Hill, Planned Parenthood’s most effective strategy has been to fall back on a combination of aggressive character assassination, diversion tactics and its high-dollar collusion with a compliant mainstream media.

However, while video images of Planned Parenthood’s highest-ranking medical personnel are continuing to burn their way into the American conscience, a new wave of pro-life optimism is gaining ground.

Trending overnight Tuesday, and well into Wednesday, the Twitter hashtag #UnPlannedParenthood has provided well over 10,000 social media users an outlet to tell their story of unplanned pregnancy.

As reported at the International Business Times and National Review throughout the day Wednesday, the hashtag is mobilizing a public that has leaned toward a pro-life position for the past 21 years.

Among the top tweets, as of 4:30 p.m. Wednesday, were a woman who was placed for adoption when she was a child, and two mothers who celebrated their decision to carry to term and parent their children as young mothers:

As a child who was adopted by my awesome parents, I'm loving this: #UnplannedParenthood. Life is not a mistake.

My #UnplannedParenthood is the greatest miracle of my life.Greatest decision I ever made at 19 and in college. #mysun pic.twitter.com/WcrItrSXYz

Had my oldest at 20, ex-husband wanted me to abort. Raised him alone for 8 years, flat broke. Would 100% do it again. #UnPlannedParenthood

#UnPlannedParenthood is just the latest pro-life hashtag to trend on social media, with #WomenBetrayed trending Tuesday in the lead-up to rallies in over 60 U.S. cities.

The week’s action on social media marks the third week in a row that the pro-life movement has made its presence felt, after taking over Planned Parenthood’s #PPShoutYourStory hashtag July 16, the week The Center for Medical Progress released its first video.

#PlannedParenthood, #PPSellsBabyParts, and #Lamborghini have been among other trending hashtags uniting and maximizing the voice of the pro-life movement since the first video was released July 14.