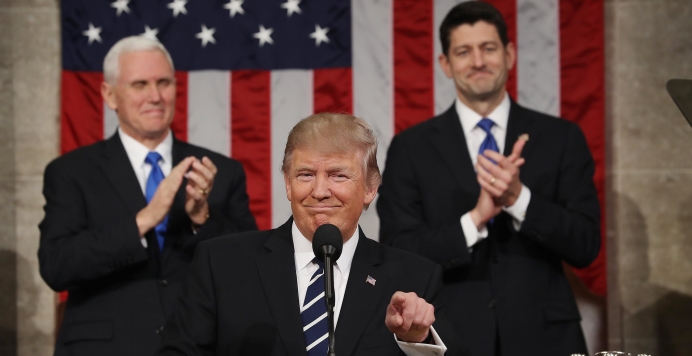 Trump's Congressional Address and the Power of Story

“Here it comes,” I told my wife while we were watching President Trump's congressional address Tuesday night. “I always hate these parts.”
To my credit, that moment when a political figure trains the attention of the nation on a “special guest” is typically the most cringe-inducing portion of any political spectacle—which are generally cringe-inducing by nature. What I expected to hear, as President Trump fixed our eyes on his first guest, Megan Crowley—a 20-year-old college student who has battled Pompe disease throughout her life—was an attempt at an uplifting story, where the real hero would end up being the American government, or “the community” or some other entity besides Megan.
Why was this moment going to be any different?
Yet, just as I have at so many twists and turns during the current political season, I found out I was wrong. And I found out in a hurry. I kept finding out just how wrong I was as the camera turned to one individual after another—each representing a controversial policy proposed by the Trump administration—and finally culminating in a moving tribute to Carryn Owens, widow of slain Navy SEAL officer William “Ryan” Owens.
It would've been very hard to watch that moment without, at the very least, being moved to tears of empathy. Here is a woman whose husband had given his very life in defense of the freedoms we take for granted every day. And here she was, without the opportunity to share this moment with her husband even while she was being honored as one of America's heroes.
Now, there's no telling the lasting significance of that moment. We live in an age where the 24-7 news cycle brings us a brand-new scandal—real or imagined—every 10 or 15 minutes, so “lasting significance” has become something of a relative term when it comes to news.

Tweet This: @realDonaldTrump address reminds us of the power of story. #prolife #pregnancyhelp @Hobbnobbin

What we do know is that, by focusing on his special guests, President Trump converted “issues” into real people. And he did it by harnessing the furious, irrefutable power of story.
One person's story has the power to set into context an entire movement, an entire issue, an entire culture.
As we champion the value of every single human life, we need to remember there's no tool more powerful than a story.
Every day, we see new examples of of politicians and public figures making bizarre statements in defense of abortion. Just last week in Utah of all places, the Democratic House Majority Leader, Brian King of Salt Lake City, lambasted fellow legislators for using the word “babies” in reference to abortion. The Salt Lake Tribune wrapped up its coverage of a bill mandating that abortion businesses make women aware of the RU-486 reversal process—which has saved over 200 babies to date—with the following quote from King:
What we are talking about are zygotes and fetuses and embryos. …. When I hear an individual refer to an unborn child as a baby, I know immediately they are not to be taken seriously.
You get that? King wants you to know that if you call—in his words—“an unborn child” a baby, he’s going to dismiss you right out of hand. Like you’re a court jester.
How do we counter insanity like this?
Let’s do it through the power of a story.
Becky Buell is a young mother of two in Northern California. When she was 17, she was pregnant for the first time, and though the father of her child initially stepped up and married her, the marriage wouldn’t last. Things were falling apart in that marriage when Becky found out she was pregnant a second time.
This time, she went to an abortion clinic, where she was given the first of two doses in the RU-486 regimen, also known as the abortion pill or a medication abortion. At first, the abortion clinic wouldn’t let her see her baby—ahem, “unborn child”—on the ultrasound screen.
Becky regretted her choice the moment she took the pill. She was actually still in the parking lot of a Sacramento Planned Parenthood when Becky found AbortionPillReversal.com. She ended up calling the number for the organization—a network of physicians trained to administer a medication that can halt the abortion—and within hours, was at a doctor’s office to begin the treatment.
Today, Becky is a burgeoning leader in the pro-life movement. But far more than that, she’s a successful single mother of two. That call to AbortionPillReversal.com saved her son’s life. His name is Zechariah—a biblical name translated, “The Lord has remembered”.

It will be easy to dismiss Becky as an anomaly, or as a subset of a larger issue, or as just one more statistic. But the fact is, Becky is not a statistic, she's a person. And so is her baby boy, Zechariah.
Just as President Trump did in his speech before congress Tuesday night, we need to train the attention of our communities, supporters, and especially those who disparage our life-saving work on the real women and real families who are rescued from abortion every single day.
Are we telling stories like Becky's in a winsome, inspiring, unifying way?
I never thought I'd be saying this, but that's one lesson we’d do well to learn from President Trump.
Tagged under
Tweet