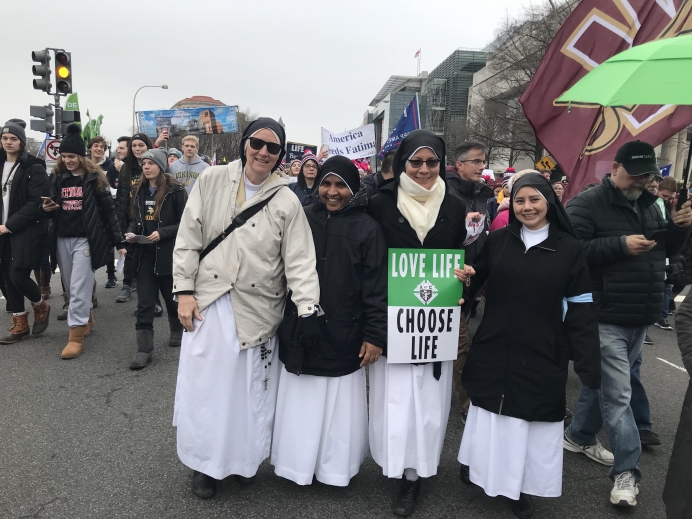 “This is my passion” - Sister Dede on defending life, Abortion Pill Rescue

What brought the religious sister who made headlines by speaking fervently in defense of life at the recent Republican National Convention agree to do so on the national stage?

Sister “Dede” Byrne, MD, is a retired US Army Colonel, board-certified family practitioner and general surgeon, founder & director of the Little Workers of the Sacred Hearts Pro Bono PT clinic, which also offers a diabetic clinic once a month, a preceptor for the Georgetown University School of Medicine, clinic director and surgeon for the Catholic Charities Medical Clinic (formerly of the Spanish Catholic Center), serving the uninsured in the Washington Diocese, and she is an active missionary and superior of the D.C. Little Workers of the Sacred Hearts house.

Because the unborn have a special place in her heart, she decided to add Abortion Pill Rescue® provider to her roster of medical roles.

The Abortion Pill Rescue Network (APRN) is a network of roughly 900 rescue providers and centers that facilitate and/or assist with the abortion pill reversal (APR) protocol.

APR has made it possible for pregnant moms who have begun the chemical abortion process but then regretted their decision to have a second chance at choosing life for their unborn children.

A new application of an FDA-approved progesterone treatment used for decades to stop miscarriages, if APR is implemented soon enough after the mom takes the first of two abortion drugs, it may be possible to save her unborn baby.

To date more than 1,000 lives have been saved thanks to APRN.

Sister Dede’s religious community, the Little Workers of the Sacred Heart of Jesus and Mary, is an Italian order more than 120 years old whose charism involves performing overseas medical missionary work, educational services and providing free medical care for the poor and uninsured. The Sisters have both teachers and health professionals in their community.

Her convent clinic in Washington D.C. has been offering APR for about five years, after a doctor who was a member of the local Catholic Medical Association chapter inquired about the possibility because more providers were needed.

Splitting her time between her varied physician roles and overseeing the Little Workers of the Sacred Hearts house, Sister Dede serves prospect APR mom whenever she can.

When a mom in need in her area comes through the APRN she will get a text message inquiring if she is available.

If she is, she will ask the APRN nurse to find a pharmacy for the mom’s initial progesterone prescription, often needing to be a 24-hour site depending on when the APR call comes in. Sister Dede then asks the nurse to send her the intake information and contacts the mom, introducing herself and asking the mom if she has questions.

APR can be successful as long as 72 hours after the first abortion pill is taken, but it is best for the treatment to begin within 24 hours.

The cost for progesterone has come down some, she said, but affording it can be a concern for some of the moms. When necessary, Sister Dede’s community has helped APR moms pay for the starting treatment.

The convent clinic is not the typical medical setting for many of the moms.

The first order of business is an exam and ultrasound. When the medical care has been handled, Sister Dede will talk with APR moms about their situation. Having concern beyond the temporal to include her patients’ eternal life, she said she strives to also be a doctor for the soul.

Very often Sister Dede will give the APR moms food and diapers, and then gets them set up with an OB-GYN for continued prenatal care.

Sister Dede gave a stirring witness to life in her RNC address, stating, “As a physician, I can say without hesitation: Life begins at conception,” noting as well how the unborn are marginalized, and calling the faithful to stand against “a legislative agenda that supports and even celebrates destroying life in the womb.”

It was one that garnered her both praise and criticism, the pro-life message being welcomed by many and considered controversial by others.

As a Catholic nun, unsurprisingly, she was raised Catholic and observant of the Church’s teaching, But the defense of life for Sister Dede isn’t simply predicated on Catholic teaching alone. She believes the Lord made it explicitly clear in the 10 Commandments that abortion is unequivocally immoral with the Commandment, “Thou shalt not kill.”

This should be a given for any person of faith, she said.

"It's a head-scratcher when I hear people say, 'I'm pro-life, but there are a lot of other issues,'" said Sister Dede.

Tweet This: "It's a head-scratcher when I hear people say, 'I'm pro-life, but there are a lot of other issues'" - Sister Dede Byrne

She understands that not everyone views things through the lens of faith, but it’s still a struggle to wrap her head around when people don’t realize the truth encompassing life in the womb.

“It’s only with the grace of God that we see what He sees,” she said regarding the humanity of the unborn.

Another of Sister Dede’s powerful statements in her address was, “While what I have to say may be difficult for some to hear, I am saying it because I’m not just pro-life, I’m pro-eternal life. I want all of us to end up in heaven together someday.”

She really believes that support for abortion puts one’s soul in jeopardy, and it causes her concern for someone to actively remove themselves from a state of grace.

“The issue of life is the solid foundation for all other issues,” said Sister Dede.

“If you don’t support the most vulnerable, who is the unborn in the womb,” she said, “how can you support others?”

She is convicted as well in that speaking out is a way in which God wants her to serve the cause of life right now.

Sister Dede had prayed, she said, asking God how to use her as an instrument for life, and later that same day she received the call asking her to address the RNC.

She considers herself and the other Sisters to be blessed in their vocation of serving others. The Sisters stay close to the Lord in prayer throughout their day, she said.

When she first meets an APR mom, Sister Dede explains, “I’m a Catholic sister, we give our lives up for others.”

She recounted how that often the APR moms had asked the abortion facility for help once they regretted taking the abortion pill, only to meet a dead-end.

“They didn’t give me a choice,” they will tell her.

“There was no pro-choice,” Sister Dede said.

“They’re in the midst of such hurt,” she added.

“These ladies come in, and I explain how we’ve devoted our lives to caring for the poor, and I show them my medal,” said Sister Dede, referencing her community’s emblem containing the Sacred Hearts of Jesus and Mary, “and let them know that we put everyone between those two hearts.”

“So, they experience the love of Jesus just by coming into our convent,” Sister Dede said.

When comforting the moms about their decision to abort, she will acknowledge that she herself is a sinner doing the best she can.

“I am the queen of mistakes,” said Sister Dede. “But it’s (important) when we’ve decided we made a mistake.”

She offers comfort to each mom as well in anticipation of the possibility that the reversal may not be successful. She assures them the Lord knows their intent in trying to save their child.

“No matter what happens, Jesus is proud of you,” Sister Dede said.

She would tell prospective APR moms that progesterone is a natural hormone, it doesn’t affect the baby, and that children are born healthy with successful reversals.

But “It’s important to get started ASAP,” she said.

With the rising prevalence of chemical abortion, and more providers needed for the APRN, Sister Dede would tell potential Abortion Pill Rescue® providers that it’s not as difficult as they might think, and you do not have to be an OB/GYN or general family practice doctor.

You only need access to ultrasound, she said, and one other thing - "a heart for the unborn."