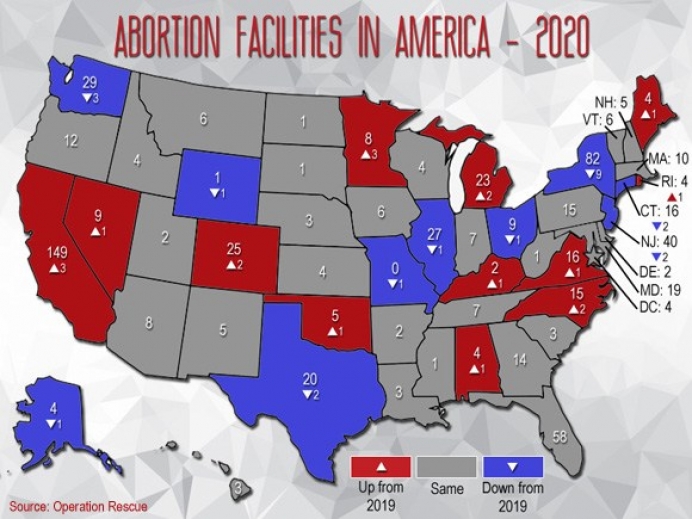 The status of American abortion facilities in 2020: The first abortion-free state

Part one of a two-part special investigative report

Missouri has become the first Abortion-Free State – at least in practice for now.  The embattled Reproductive Health Services Planned Parenthood in St. Louis was the last abortion facility in Missouri. It remains open, but Operation Rescue has confirmed that no abortion appointments have been available there for months, and none are available anytime in the foreseeable future.  All abortion appointments are now being referred to the Fairview Heights Planned Parenthood facility across the Mississippi River in Illinois.

RHS Planned Parenthood won a dramatic licensing battle with Missouri in May after an Administrative Court judge ordered the facility relicensed despite the objections of the Missouri Department of Health and Senior Services, which found the facility to be unsafe and out of compliance with state abortion regulations. The DHSS had documented several cases of life-threatening abortion injuries, but their investigation into those incidents were stone-walled by uncooperative Planned Parenthood employees.  Shortly after being relicensed, the facility voluntarily halted surgical abortions in Missouri. It had earlier voluntarily halted the distribution of abortion-inducing pills due to an unwillingness to comply with Missouri laws regulating the drugs. (Read more about this licensing battle HERE)

“While the RHS Planned Parenthood remains open and licensed for abortions, we confirmed that none are being done there.  That means this facility is currently acting only as an abortion referral center.  There is no operational abortion facility in the State of Missouri, making it the first Abortion-Free State at this time,” said Operation Rescue President Troy Newman. “It is obvious that Planned Parenthood of the St. Louis Region, which operates RHSPP, seeks to avoid having to comply with Missouri’s strong pro-life laws, and has opted to abort in Illinois where abortion facilities are essentially unaccountable. This shows a gross disrespect for the lives and safety of the women Planned Parenthood purports to serve.”

Other noteworthy facts were revealed by Operation Rescue’s survey of every U.S. abortion facility. 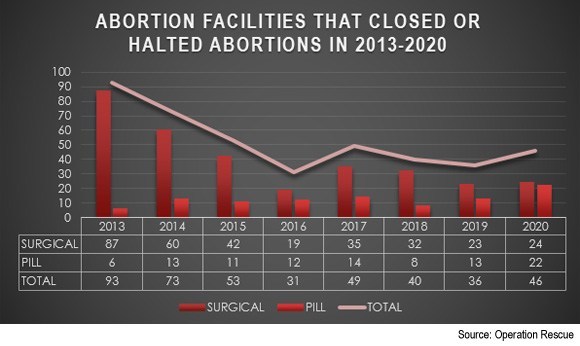 Each year, Operation Rescue conducts a nationwide survey that involves contact with each abortion business in the U.S.  The information gathered about the abortion clinics and their practices represents the most current and accurate data available.

This most recent data was compiled by Operation Rescue from November 16 through December 16, 2020.

Operation Rescue defines “abortion clinics” as those businesses that conduct abortions outside a hospital setting.  There are two categories of abortion clinics:

The number of surgical abortion clinics continues to decline with six fewer today than last year at this time.

In fact, the number of surgical abortion clinics has fallen each year for at least the past decade from 713 in 2009 to a record low of 458.

That represents a decrease of 255 surgical facilities — 36 percent – over the past ten years. 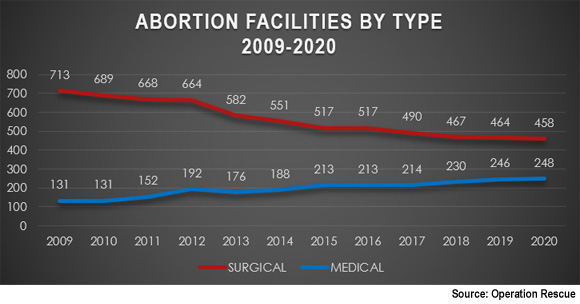 In contrast, abortion pill facility numbers have been steadily on the rise over the past decade, increasing 47.2 percent in the past eleven years.

Today, there are 248 facilities that abort only using chemical means – an increase of only three clinics nationwide in 2020 compared to 15 in 2019.  This has slowed Planned Parenthood’s push to expand abortion pill facilities nationwide.

Facilities that closed or halted abortions in 2020

Interestingly, the largest Democrat states, California and New York, had the most closures or facilities that stopped all abortions. These states were also among the hardest hit with restrictive China Virus lock-downs. There is anecdotal evidence that the restrictions contributed to the inability of some facilities to conduct abortions, but the extent of that impact is unknown at this time. 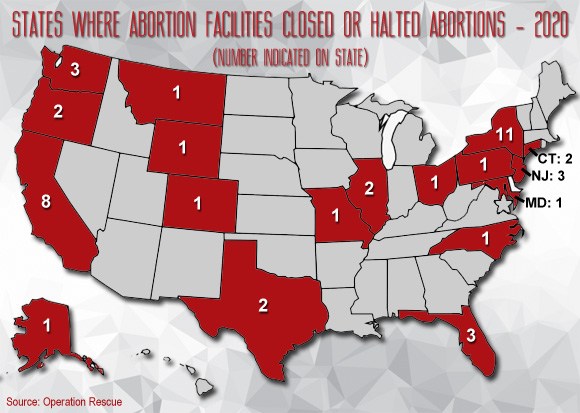 Of the 45 facilities no longer in the abortion business, at least seven indicated that they hoped to begin offering abortions again at some point in 2021.  One facility indicated they could not offer abortions until 2021 at the earliest, because they had no abortionist due to the China Virus.  There is a likelihood that at least some of those facilities will never resume abortions.

Some notable facilities that closed or stopped conducting abortions are highlighted below.

Editor's note: This article was published by Operation Rescue and is reprinted in part here with permission. Heartbeat International manages the Abortion Pill Rescue Network and Pregnancy Help News.