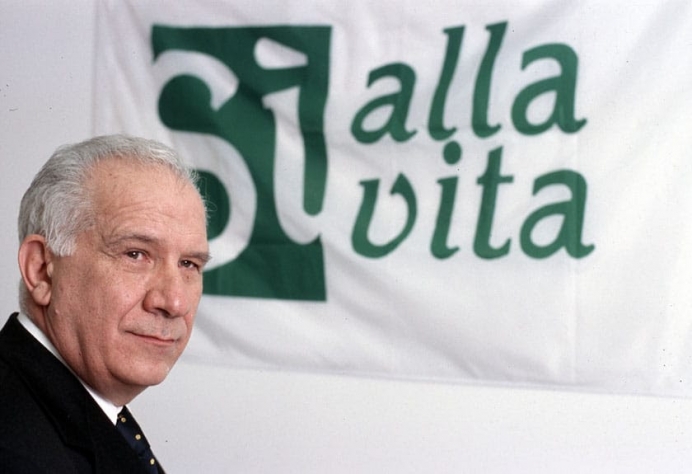 Thank you for the gift of your life - Carlo Casini, Movimento Per la Vita founder dies

He has returned to the Father's House

The founder of Italy’s Movimento Per la Vita (MPV), 85, had been seriouslly ill for some time, according to a statement from the pro-life group.

“The man who made his life a mission in defense of the life and dignity of every human being from conception to natural death, professing with passionate consistency and deep faith the Gospel of Life, entered into Eternal Life,” the translated statement said.

The pain of the loss of Casini revives the memory of his work for justice, political service devoted to the protection and acceptance of human life, and his writings, it said, all in service of the prophecy of life in a world marked by a culture of death.

The Italian Movement for Life, of which Carlo Casini had remained in a guiding role for many decades, would carry forth his legacy with faithful commitment, it continued.

Casini, who served in the Italian and European Parliaments and had relationships with Pope St. John Paul II and Saint Teresa of Calcutta, was recognized with Heartbeat International's 2015 Servant Leader award. Heartbeat partners with MPV in supporting the pregnancy help community.

Love and accept one another, even in extreme difficult situations

From Casini's biography provided for his award acceptance address (edited) -

Casini was born in Florence in 1935, to a large family (eighth of nine children), simple, close‐knit and deeply religious. His mother, Marina, was a housewife, and his father, Fiorentino, a railway laborer.

He learned from an early age what it means to accept and love one another, even in extreme difficult situations.

In July 1938 when Casini was just three and half years old, his father died in a work accident; followed by the death of his sister Anna, seven, and the death of a brother, a few months of age.

Casini said in an interview, "My family was exceptional. The name of God that I did know by them is Providence. So you do not have to worry about the future. “

Despite this hardship, poverty, hunger, serious diseases, his house hit by Germans’ grenades in WWII, Casini and his three brothers were able to study and graduate successfully while his sisters found employment.

Since his youth, he was actively involved in parish life and his Catholic faith, including Catholic Action, a lay Catholic group formed to promote the faith’s principles amidst anti-religious sentiment in government and society.

He was generous, involved in helping others, willing to sacrifice, and had a great love for the beauty of the mountains.

One of Casini’s greatest teachers in his law studies was the late Giorgio La Pira, the “holy mayor” of Florence, who is now at the Servant of God stage in the process of being proclaimed a saint. Attaining his law degree was followed by work as a judge and meeting Maria Nitti, who would become his wife. During this time his commitment in the social field grew, shared with his wife.

It was during his time as a judge that he encountered the tragedy of abortion.

While in Florence in the mid-1970s Casini began to advocate for the unborn. When abortion was promoted in Florence as the solution for unplanned pregnancy, he worked to found the first pregnancy help center.

“That pregnancy problems may be solved with help, not with abortion,” was stated on the wall of the first Italian pregnancy help center.

Casini gave total and generous commitment to MPV, serving as president for 40 years with great wisdom, consistency, dedication and goodwill.

In March 2015 he was elected the honorary president of the organization.

He entered politics in 1979 in order to write in the laws that every human being is always human.

His commitment reached deep into the field of culture, with Casini writing many books, articles and papers both in academic journals and in the press. During these years he also took part in a large number of conferences, meetings and speeches in radio and on television.

He maintained close contact with the Catholic Church in Italy for counsel in complex ethical situations.

Casini’s tireless commitment for life never prevented his participation in family life, and he was able to pass on the love for life, with his daughter Marina now one of the vice‐presidents of MPV.

In addition to Mother Teresa and Pope John Paul II, he was supported in his vocation for life by other champions of life, Catholic lay leader Chiara Lubich, and renowned pediatrician and geneticist Jerome Lejeune.

Tweet This: “That pregnancy problems may be solved with help, not with abortion”

Casini’s wife and children were with him when he died, la Repubblica reports.

A story surrounding Casini’s founding of MPV in 1975, after discovering an illegal abortion business in Florence where he was serving as a judge, has Casini promising each of 10 women in the abortion waiting room all the help they needed.

All of those 10 women had their babies, and Casini would go on to establish the brick and mortar pro-life facility - with the phrase that unplanned pregnancy should be met with help and not abortion inscribed on the building.

Cardinal Gualtiero Bassetti, president of the Italian Bishops’ Conference (CEI), said it was with deep emotion that he learned the news of the death of Casini, “promoter and historical soul of the Movement for Life, exemplary Christian and dear friend.”

Bassetti had been able to speak on the phone with his daughter Marina just before Casini passed, Avvenire reports, Casini’s daughter conveyed the cardinal’s words of comfort to her dying father.

The cardinal’s message was in part (translated): "Carlo, don't fear at this moment: your whole earthly existence has been a hymn to life in words and deeds."

Visionary work an example far beyond Italy, across Europe and around the globe

Heartbeat International staff members who’d encountered Casini, even if briefly, recalled him with fondness and respect.

Heartbeat’s President Jor-El Godsey praised the legacy and devotion of the visionary Casini.

“Carlo Casini will always be a leader of immense vision, intense conviction, and immeasurable passion for championing life,” Godsey said. “Only now, in graduating to be with the Lord and see what the Lord sees, can he truly understand the impact his life had, still has, and will have.”

“His leadership flows through the work of MPV,” he said, “not just in the capable hands of his daughter, Marina, but through the many leaders he has raised up, influenced, and inspired.”

“Moreover,” added Godsey, “his visionary work has been example far beyond his beloved home country of Italy, but across Europe and around the globe.”

“In person he was a mix of warm welcoming smile and a fire in his eyes to fight for life,” he recalled. “Carlo's eloquence flowed to many subjects and leveraged many of his talents, but never greater than when speaking of how love is our greatest weapon against the culture of death.”

"We can trust in Infinite Love"

Life is not taken away, but transformed for those living in faith, MPV’s statement on Casini’s passing said. And as life is a gift received, it is consumed in love and becomes a gift given. And finally in the transition it meets its fullness. Not the end, but the fulfillment: the fullness of the gift renewed forever.

Casini lives on in memory and in the company of holy friends, John Paul II and Mother Teresa of Calcutta, the pro-life group said. to whom he was dear and whom he held dear among the defenders of life.

“And we pray that he will cherish us too, and will still help us in keeping faithfulness to the promise that he himself inspired and nourished us, and that we hold in our hearts with greater joy than weeping.”

"Dear Carlo Casini, Warmest thanks for your kind letter, for your love and for your prayers. My prayers are with you. We recognize that God uses you as His instrument to awaken in people's hearts a deep respect for anyone, as son of God " (Mother Teresa, 1996)

"Dear Mr. Carlo Casini, Thank you for your kind letter and for the work that you are doing for the glory of God and for the good of born and unborn children, God's gift. Be assured that the "Movimento per la Vita" is the fruit of the prayers of many families. We try, everyone, to bring families to Jesus in the Blessed Sacrament, because families who pray together will always remain united. Keep the joy of loving Jesus and Mary and share this joy with everyone you meet. God Bless. “(Mother Teresa, November 22, 1989).