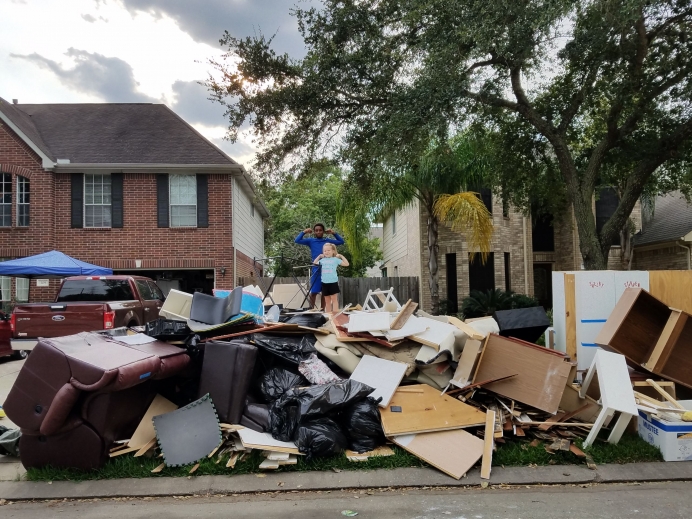 How This Texas Family was Ready When Harvey Swept Through

As she and her husband, Scott, have faced the ups and downs of life and ministry over the years, they’ve grown accustomed to relying upon each other—as well as the grace of God—to face the challenges as they come.

So, when Hurricane Harvey destroyed the first floor of their home this August, the Simmons family may have been caught by surprise, but they weren’t caught unprepared.

“When we had the flood, I didn’t have to spend all my time asking why,” Debbie Simmons said. “I told God, ‘I trust there’s a good story you’re writing.’ I keep that perspective that He wants me to keep getting better and better sooner and sooner.”

Losing Her Quadrupulets, Gaining a Calling

A major challenge that helped prepare the Simmons for whatever may come has been their own uphill battle toward parenthood.

Though they’d always wanted to have children, the Simmons’ struggled with infertility, and they eventually turned to fertility treatment. They were hoping the next chapter of their lives would be marked with newborns when Debbie became pregnant with quadruplets in 1995, but the babies were born prematurely at 26 weeks and did not survive.

In the midst of her grief, Simmons decided not to ask God why. She knew she would not understand or like the answer. Instead, she asked God how to survive her situation. Her initial request evolved into to how to thrive in her situation.

Simmons quit her engineering job and started working on a degree at Southwest Baptist Theological Seminary to prepare for full-time ministry. Through their work together with Anchor Point—which they launched in 2011—the Simmons’ have used the heartbreak of having lost their sons to minister to hundreds of women who couldn’t have children or who, like them, had lost children of their own.

In the process, the Simmons’ have also grown into a family of 11, adopting their first five children April 1, 2002—seven years to the day after they lost their quadruplets. Little by little, they’ve welcomed four more children into their family, all while serving women and young families through Anchor Point.

“It’s letting God take that woundedness, that hurt, that pain and turn it into something that he could use and make beautiful,” she said “We have a laboratory in our home where I go, ‘Oh, that really worked. That should probably work for other parents then,’ You learn by the school of hard knocks.”

The Birth and Growth of Anchor Point

With the initial goal to serve children in the foster care system, the Simmons’ started down the path of opening up a foster care ministry, but God instead opened doors for them to open a pregnancy center that included adoption help along with a broader scope of services.

Having gone through the adoption process multiple times herself, Debbie created a course called “Discover Adoption,” that aims to help prospective couples navigate the rocky terrian of adoption or foster care.

“The reality is, about half of married couples are very interested in adopting and the orphan issue but they don't know how to get through all the steps to do it,” Simmons said. “What we've created is a course that says, ‘Let us educate you and empower you so that you are basically an armed and dangerous prospective adoptive or foster parent.’”

In addition to going through the Discover Adoption material, Anchor Point encourages adoptive moms to participate in its parenting education classes geared toward their more traditional pregnancy center clients. An adoptive mom who hasn’t had biological children of her own may have as many questions as a pregnancy center client, Simmons pointed out.

Along with the pregnancy center and adoptive services, Anchor Point serves young famlies with children up to 2 years old who are struggling behaviorally, emotionally and physically. Anchor Point also comes alongside school-aged children with similar stuggles, and runs an evening family therapy class called Pathway to Hope.

Added up, Anchor Point is a prime example for how a pregnancy center can explode the slanderous myth that pro-lifers’ care for babies up to the point of birth.

“Some people ask us why we don’t just duplicate another pregnancy center, but the kids’ issues don’t stop,” Simmons said. “We like to keep our expertise wide. If we can get mentally healthy children to adulthood, that’s another way we can eliminate at-risk behavior that ultimately creates crisis pregnancy or sexually transmitted diseases.

“We want to be the place that says, ‘Hey, we're going to help you thrive.’"