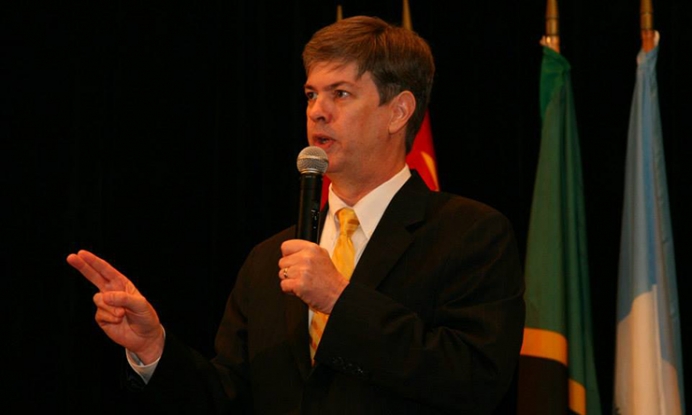 “Abortion is becoming obsolete” was a message as surprising to some as encouraging to others who braved snow, slush and black-iced roads to attend the annual Pregnancy Care Center’s Celebrate Life Banquet on Feb. 24 at Englewood Baptist Church.

“The national sentiment about abortion has changed so much that a majority of Americans now support limitations on abortion,” said the evening’s speaker, Kirk Walden, an author, professional golfer and advancement specialist for Heartbeat International.

“Once there were 2,000 abortion clinics in the country,” he said. “Now, there are about 800. Where once abortion clinics stood now sit empty buildings. One such clinic in Chattanooga, Tennessee, which had operated for 18 years before having to close, has been turned into the National Memorial for the Unborn to honor children who had died through abortions.”

Walden called for a new effort to inform young people through social media that unborn  children are indeed children.

“Another Supreme Court decision reversing Roe v. Wade is not necessary for abortion to be limited in this country. Instead, the more people know about the life of the unborn, the more they will choose to protect it,” he said. “The challenge at this point is not a legal issue as much as it is a matter of education about fetal development.”

Celebrating 25 years of ministry to residents of Rocky Mount, Nash and Edgecombe counties for the benefit of women and men facing what is to them a crisis pregnancy, the center’s Executive Director Kay F. Gurganus told the crowd of more than 400 people that in just the last year, more than 40 babies had been saved from death by abortion.

Services at the center include, on a limited basis, state-of-the-art ultrasound pictures for its clients to see the growth of their child.

“It’s not unusual to witness pregnant women considering termination of their pregnancy choose life as a result of seeing their developing baby for the first time,” Gurganus said. “In the 25 years of the center’s ministry, the Pregnant Care Center has been able to touch the lives of more than 96,000 babies, teens, women and men in our community through over 15 free life-affirming services.”

Over that span of ministry, more than 700 children have been born rather than aborted, and more than 4,000 women and men have attended classes on pregnancy related topics, spiritual growth and baby care and parenting.

“We are here to show pregnant women that though their situation appears hopeless – there is hope,” Gurganus said.

Attendees watched a video of a young PCC client who chose 16 years ago not to have an abortion, and then they watched her 16-year-old son describe the life, accomplishments and dreams that he has lived because of his mother’s choice not to abort him.

A couple described how the education, emotional and spiritual support as well as the material provisions that the center allowed them to earn, enabled them to have a child that they had considered aborting.

Pregnancy Care Center’s outreach now includes limited STD testing at N.C. Wesleyan College for both male and female students. It is the center’s hope to use this opportunity to share with students God’s plan for marriage and sexuality.

The Pregnancy Care Center seeks to promote abstinence-until-marriage and to assist individuals and their families facing the challenges of unplanned pregnancy.

Article by the Rocky Mount Telegram. Reposted with permission.