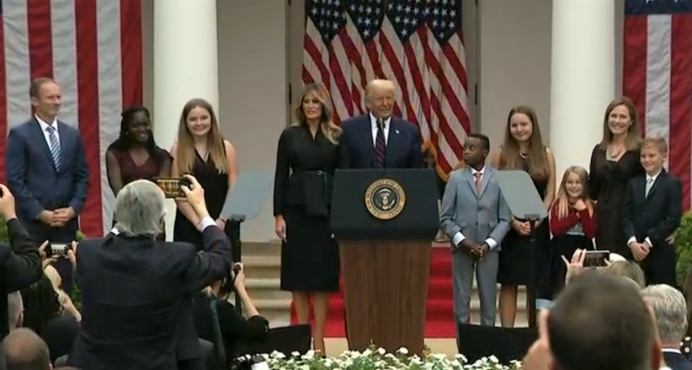 Success and motherhood: What Amy Coney Barrett's nomination means to me

I would love to say that I was watching live when Amy Coney Barrett delivered her speech accepting President Trump’s nomination for her to fill the vacant Supreme Court seat. But I was not. As a mother of three kids under the age of five, I am pretty sure I was mediating an argument over the Buzz Lightyear toy, or negotiating with my three-year-old how many bites of green beans it takes to be “done,” or maybe I was advocating on behalf of my one-year-old, who just got birthday toys that her siblings are convinced are theirs for the taking.

Anyway, I was not watching live. But I did not miss it. When my three angels were snuggled up, asleep in their beds, I tuned in to hear what Justice – er, Judge (sorry, Freudian slip) Barrett said. And I listened a couple times.

This nomination means a lot to me. It is not just momentous for the potential shift it represents in the Court, though I would be remiss to gloss over the tremendous impact that a Justice Barrett could have on our nation’s highest Court. As she emphasized in her acceptance speech, Barrett is an originalist in the mold of Justice Scalia. She believes that a judge’s job is to read the law as it is written, and not “legislate from the bench” or stretch the interpretation of the law to make it fit her own policy preferences.

Since the constitution never utters the word “abortion” or the “privacy” notion on which our abortion cases are founded, a judge with an originalist judicial philosophy is certainly a cause for hope for the only group of persons in this nation who are systematically deprived of their most basic right - simply to be alive. Judge Barrett has the potential to make a serious impact on the way cases are decided.

Yet, there is something personal about this nomination. To me, Judge Barrett represents something deeper, an affirmation of an idea around which I have, at least to some extent, built my life: that women can be both great moms and extraordinarily successful in their careers and other endeavors. That women need not choose between their children and their aspirations. That motherhood is anything but a waste of women’s talents and need not be an impediment to her success, but actually a complement.

My life as a mom of small kids and as General Counsel for Heartbeat has meant many things! Several years ago, I traveled to Washington DC to attend a Supreme Court oral argument in a case for which I was privileged to submit an amicus brief. The very next day, I was home, rocking my sweet daughter to sleep and snuggling her close. These days, especially in the era of COVID, it is not unusual for me to attend Zoom meetings with a toddler on my lap and the Five Little Ducks video on my spare screen to keep her quiet.

It is not always easy – sometimes I am up long after the kids go to bed, working to put the finishing touches on a contract or trying to get my email down to a dull roar.

But it is so worth it, and I am not alone! One does not have to look far (in the pro-life movement in particular) to see tons of rock star moms who stand alongside mothers whose situations may be challenging, offering support, encouragement, and resources. Or advocating for other babies while taking care of her own.

And we watch in bewilderment as the pro-abortion side, the group that claims to be all about women’s empowerment, proclaims that women “need” abortion so that they can be successful in life. This is the least empowering message. We watch in frustration while the media refers to abortion as “women’s rights,” ignoring the fact that the majority of pro-lifers are, in fact, women. But most of all, we watch in sadness when prominent members of our culture proclaim that they had abortions so that they could be successful.

The pregnancy help movement in particular is the mission field that works to support those in challenging pregnancy situations, because we know that women’s futures don’t end where their babies’ lives begin.

Tweet This: In the pregnancy help movement we know that women’s futures don’t end where their babies’ lives begin.

And for me, the change on our nation’s highest Court from Ruth Bader Ginsburg to Amy Coney Barrett is a tangible example of that. Barrett was not wrong when she credited the late Justice Ginsburg for her contributions to improving the lives of women in this country. But her legacy will be forever stained by her belief that women’s success depended on the right to end the lives of their unborn children. She only got it partially right: Success for women, but at the cost of motherhood.

As the first Supreme Court justice ever to serve while her children are still school-aged, ACB represents those of us who refuse to believe we must pit our children against our careers. Success and motherhood. That’s progress.

So take heart, Amy. There is a caravan of minivan moms who are inspired by your achievements and empowered to embrace the challenges that working motherhood presents – and all, as you so poignantly remarked, without any reasonable amount of sleep.