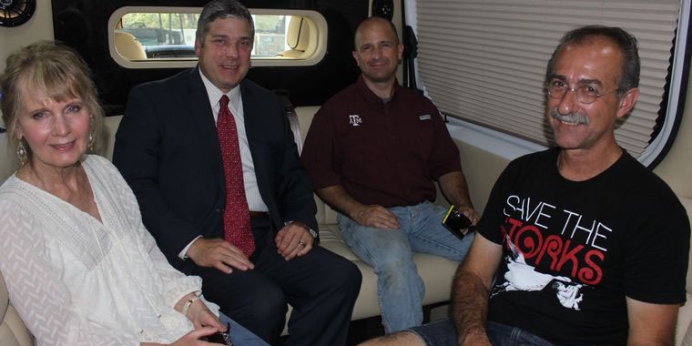 Pro-life supporters gathered Thursday night at the Meintjes Ranch on Old Annetta Road to learn about Save the Storks, an organization that offers mobile medical units to pregnancy resource centers to expand their access to women considering abortions.

Mike Brasovan, who helped organize the “Going on the Offense for Life” event, called the mobile units, known as Stork buses, new weapons in the battle to defend life.

“Three out of five ladies that enter the bus choose life for their children and get to hear the gospel and get connected to a support system that can help them,” he said.

“We have the right answers, we just need to get out there and communicate the truth in a way that can’t be ignored and that meets people where they are at.”

Tweet This: 3 of 5 ladies that enter a @SaveTheStorks bus choose life.

Pregnancy resource centers can park the buses outside abortion clinics or near colleges or other unserved areas.

Michael Schwebach, a bus driver with Save the Storks, said the playful moniker indicates “a more positive approach” to reaching abortion-minded women.

“When Jesus met the woman at the well, he read her mail, but he didn’t condemn her,” he said. “He offered compassion and understanding. We have three goals: to save the child, to share the Gospel with the mother and to connect her with a pregnancy resource center.”

The buses have exam tables, restrooms, seats for counseling, a work area for a sonogram machine and technician, multiple monitors and media inputs, as well as a space for an iPad, Internet connection and refrigerator.

They are designed to be staffed by two people, a sonographer and a counselor, Schwebach said.

“It allows [centers] to reach out to mothers-to-be who wouldn’t necessarily reach out to a pregnancy resource center or have the means to get there,” he said. “Their clientele increases when they go mobile.”

The organization sets up events with pregnancy resource centers to show what the buses can do and lines up fundraisers, Schwebach said. Big donors get to name the buses.

Whitney Meintjes, the event host, said she learned about the organization through her teenage daughter, who discovered Save the Storks while attending a Summit Ministries event in Colorado.

She got excited about getting the word out, Meintjes said, and planned to schedule an event later in the month with Lee Weaver, a founding board member of Pregnancy Help Center in Fort Worth, but the wheels were already in motion.

“Yesterday, I found out they were coming today,” Meintjes said. “This is my first time to see it.”

Weaver said he supports the idea of purchasing a Stork Bus for Pregnancy Help Center — which offers free pregnancy tests, sonograms and counseling services to some 200 women a month — but couldn’t speak for the organization’s board.

“I see it as an expansion of our ministry,” he said. “There are unserved areas, like north Fort Worth, where we could make inroads.