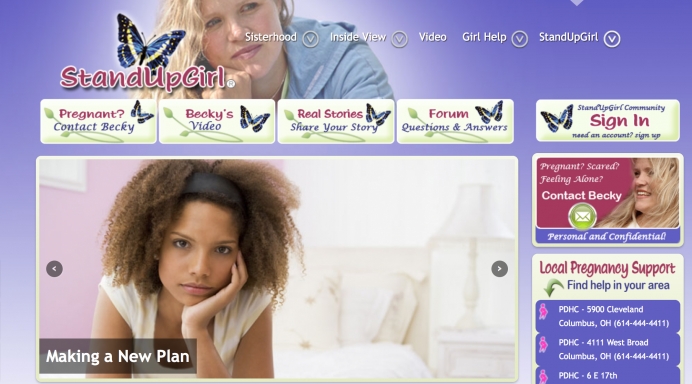 Josia was 19 and just starting college. Her future looked bright. Then, she discovered she was pregnant.

With the father’s family pushing for an abortion, she turned to the internet to look for abortion stories, and even for pictures of babies that had been aborted.

“My boyfriend was still trying to push me, and at one point, it seemed like I would choose an abortion, until the day I found StandUpGirl,” Josia wrote. “I read the stories. All of them. And drew strength from knowing that I wasn't alone and that there were other girls like me, who still found the strength and belief in themselves as women, as young as they were, to choose to keep their babies.”

Tweet This: @Stand_Up_Girl and @HeartbeatIntl's Option Line working together to support moms.

Utilizing first-hand accounts from women like Josia who have gone through the fire of an unexpected pregnancy, StandUpGirl.com is a thriving online community that stretches across the United States.

The site also serves as a conduit, connecting women in unexpected pregnancies with local pregnancy centers all over the world in cooperation with Heartbeat International’s 24-7 pregnancy helpline, Option Line.

With its woman-centered, relatable web presence, StandUpGirl.com attracts 400,000 visitors a month. Working together with Option Line, these two international online resources are able to help hundreds of thousands of women who find themselves in unplanned pregnancies.

The search-engine friendly site includes forums, videos and tools, including fetal development images, 3D ultrasound pictures, month-by-month growth charts and pregnancy calendars, all geared to equip a woman facing an unexpected pregnancy with all the tools she needs to make the healthiest decision for all involved.

“We want StandUpGirl.com to be a resource for women who are pregnant and don’t know what to do,” StandUpGirl.com’s Executive Director Dawn Marie Perez said. “It’s filled with women’s stories, and life-affirming options for themselves and their babies. We want them to make a personal connection with the women on the site. We’ve become a channel to get the girls into the pregnancy resource centers.”

Started in 2001 by an offshoot of Oregon Right to Life, StandUpGirl.com has reached more than 30 million women in its 14-year history. The site currently features more than 30,000 archived stories, submitted by women who have gone through an unexpected pregnancy to encourage younger women in similar circumstances.

Josia, who now has a 6-year-old son, said her baby’s father left her while she was pregnant, and her early years as a single mom had been especially challenging. She has since used StandUpGirl.com as a venue to share her story—including the difficulties that have accompanied her courageous decision for life.

“My ex’s parents thought I was trash, that I would never make anything of myself and that my baby would not have a good life,” she wrote. “I looked at my beautiful little boy and although he makes me want to pull my hair out at times if I had to go back and choose again, I would choose to keep him. He made me want to be a better person. He made me embrace life and looking at him made me want to prove them all wrong.”

While she wrote that she struggled with being “unbearably lonely,” Josia also said she strived to make herself better.

“I kept visiting StandUpGirl when I was at my lowest. It reminded me I wasn't alone and gave me the motivation and strength to keep going,” she wrote.

Three full-time staff members and 14 volunteers staff the organization—including Option Line director Bri Laycock—who moderates chat rooms and forums and answers e-mails. The volunteers are from around the world and of different backgrounds, but Pérez said they all want to help for the same reason.

“A lot of the women StandUpGirl.com reaches are looking for stories about abortion and a personal connection,” Laycock said. “StandUpGirl.com reaches a unique group of women with its approach, and their heart truly is to connect each site visitor with help and resources they need to make the healthiest decision for everyone involved in an unexpected pregnancy. The work they are doing is awesome.”

Tweet This: "I was at my lowest. @Stand_Up_Girl reminding me I wasn't alone."

The website’s look is designed around the dominant image of young woman identified by the original web designer. When he was developing the site, the Canadian-based designer approached a young mom in his church and asked if she’d be willing to be featured on the site.

“She said that’s actually her story: ‘I was 20 in college and had found out that I was pregnant and had to tell my family.’ From that point on, Becky has become the face of our site,” Pérez said.

Funded by a combination of grants from private foundations and a half dozen fundraising events held primarily in Oregon each year, StandUpGirl.com is a strong example of a local organization carving out an international footprint.

The organization, which relies on a marketing budget of just $150,000 to reach over 4 million visitors, also demonstrates the value of collaborative efforts within the pro-life—and specifically pregnancy help—community.

“We are here to help get women to a pregnancy help center,” Pérez  said. “We get them the help we can online, but our No. 1 goal is to get the women into a local life affirming center. If we work together, we will be able to fight the battle better.”