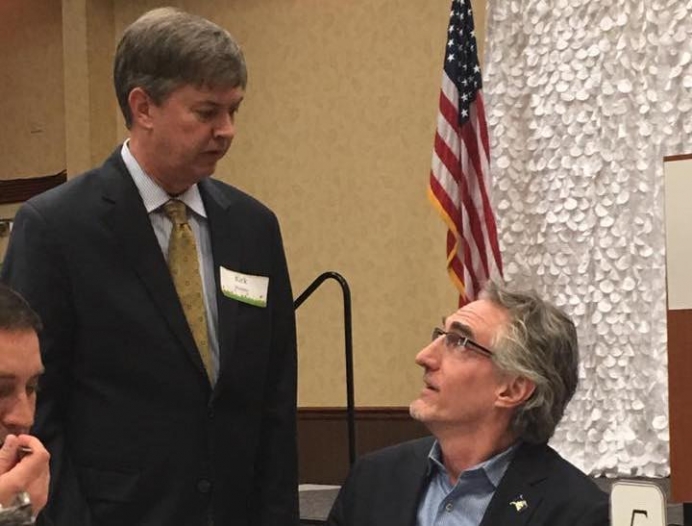 Reaching the Public Square with a Pro-Life Message

Ramblings from the Road:

North Dakota can be cold this time of year (a surprise, I know). Arriving Sunday night—nearly Monday morning—for events in Fargo and Bismarck, the temperature was less than 20 degrees and dropping. I would wake up with the mercury at 2 below.

But North Dakota is quickly becoming one of my favorite states. For a guy who lives in Tennessee, this is quite a statement. The reason of course, is its people. Count me as a fan.

Everywhere I go, I learn something valuable. I don’t know that I provide pearls of wisdom when I speak at events, but I rarely walk away without picking up something which makes me a better person. I pray I hold on to those learning moments. So it was in North Dakota.

At our event for First Choice Clinic in Bismarck Tuesday night, I had the joy of visiting with many in the political realm, such as Governor Doug Burgum and Lt. Gov. Brent Sanford, and spent time with state senators Janne Myrdal and Tom Campbell.

It is easy for us to become frustrated with “politicians;” we see what we believe needs to be done and nothing happen, so we get upset. Angry. Ticked off. Mad. I get it.

Sometimes, we have every reason to be angry. For instance, how difficult is it for those in Washington to simply say to Planned Parenthood, “Go find your own funding like almost every other non-profit. We’re giving taxpayers your $554 million”? This is supposedly difficult.

Yet, sitting down with those who make laws in North Dakota (where only one abortion center remains), I found good people, trying their best to do the right thing.

Those I talked to didn’t need to be at a banquet for a pregnancy help medical clinic; they just got elected. Few would remember if they missed this event; why not come in a couple of years when the election cycle heats up again?

That’s why I took a few moments to pull Gov. Burgum and Lt. Gov. Sanford aside at different times to say, “I know you didn’t have to be here; but you took the time and it means more than you think.”

Gov. Burgum’s daughter is on spring break; he mentioned wanting to spend extra time with her. It’s easy to forget these in the public square have private lives.

Tweet This: Lessons from the road in #NorthDakota from @KirkWalden #prolife

What did I learn? Many, many in the public square are in the political world because they care. I knew this, but I need to keep it in mind. Amidst challenges (and the many who oppose them), the good people in politics (of which there are a lot) simply want to make our world a better place.

Spending dinner chatting with Janne Myrdal, we found a number of connections. She is close friends with members of the 80s Christian group The Second Chapter of Acts, and I was a big fan. As a leader for Concerned Women for America, she worked with virtually every pro-life bill which passed in North Dakota, and today she continues to move the ball forward for life and family values.

Sen. Tom Campbell is one of those guys you want to hang out with, whether it is to talk politics or the daily challenges of life. His heart for life is apparent—and strong.

Lt. Gov. Brent Sanford and his wife, Sandi, are as down-to-earth as one can find.

And Gov. Burgum doesn’t come across as the software giant who sold his company to Microsoft for more than a billion dollars. He’s a regular guy who took a few hours from his daughter’s spring break to learn more about a pro-life ministry. While I want all in the political realm to spend as much time with family as possible, I’d like to see more take their extra time to see what life-affirming ministries are doing.

Yep, I learned something this week—and that’s a good thing because I always need it. Here it is:

Many in the public square support us wholeheartedly, and we get to meet a lot of them at these events. Some of course, are opposed to us and won’t be caught within miles of our events.

Because so many in the political world are still trying to figure out who we are (and who we are not), let’s do all we can to open our doors to those in the public square. Let’s be transparent and open, sharing our aspirations and our victories; our mission and our stories.

When we do this, walls can come down and misconceptions fall away.

And before we know it, we’ve made new friends and the culture of life takes another step in the right direction.