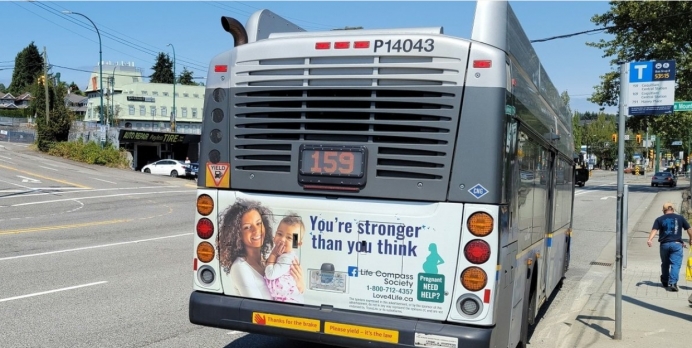 Pro-life ads have been appearing on TransLink buses in the Coquitlam and Maple Ridge areas of British Columbia, with plans for more ads Photo courtesy of the B.C. Catholic, contributed by Life Compass

(The B.C. Catholic) If you’re driving behind TransLink buses in the Coquitlam to Maple Ridge (British Columbia) area, you might see some life-affirming advertisements thanks to Life Compass, the north-of-Fraser Catholic pro-life group.

Whalen said the uplifting, positive ads “can save lives.”

The bus ad shows a smiling woman holding a happy baby. The primary message reads, “You’re stronger than you think.” A helpline number, 1-800-712-4357, and website address, Love4Life.ca, are also shown.

That messaging is important, he said, “because everybody from womb to tomb should have the right to life. It’s a fundamental freedom that we should all enjoy. And in Canada now, if you’re not born yet, you don’t have that freedom.”

Life Compass spent almost $7,000 on the ad campaign. “It drained our coffers, but it’s worth it,” Whalen said, adding he hoped the group’s annual bikeathon, to be held Sept. 11, will help replenish its bank account.

Tweet This: Everyone womb 2tomb should have the right 2life-It’s a fundamental freedom & in Canada now if you’re not born yet U don’t have that freedom

Content for several such ads, as well as lawn signs and postcards, was produced by national pro-life organization LifeCanada and provided to member pro-life groups such as Life Compass, said LifeCanada executive director Natalie Sonnen.

“In coming up with this campaign, we asked ourselves and our members whether we should launch a campaign centered on the millions or billions of dollars sent overseas for abortion,” Sonnen said. “We also looked at [the abortifacient] RU486. Another possibility was the abortion rate of Down syndrome babies.

“All these things are very serious, but also heavy and negative.  So considering all we’ve been though with COVID, we thought we’d go produce something very positive and life-affirming. And that seemed to go well with our groups.”

She said at least eight groups throughout Canada will be launching campaigns this year. Life Compass was the first off the starting line, and the Vancouver Life Community will follow within the next few weeks. Campaigns are also slated to begin in the Shuswap area of B.C.; Fort McMurray, Alta.; and Ottawa, where Action Life Ottawa has contracted for space on seven billboards in the city’s downtown area.

“It will grow, too,” Sonnen said. “I expect that as we get into the fall months, more groups will jump on board.”

Editor's note: This report was published by the B.C. Catholic and is reprinted with permission.