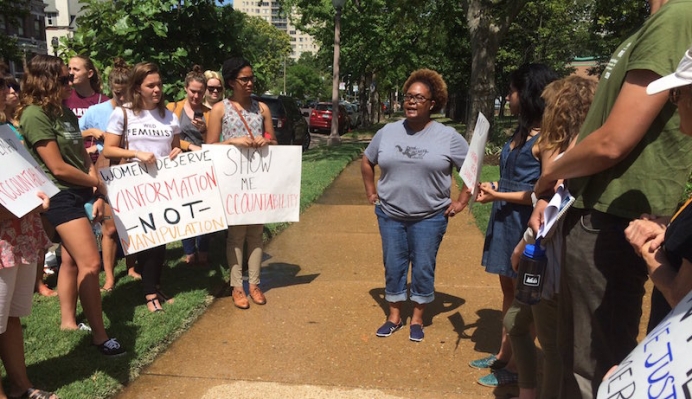 St. Louis Center 'Honored' to be Targeted for Pro-Abortion Protest

Riding a wave of victory following its favored policy victory at the Supreme Court, a small group of abortion activists staged a demonstration Wednesday at Thrive St. Louis, a pro-life pregnancy help organization.

The rally drew 23 campaigners—predominantly paid staff or summer interns for NARAL Pro-Choice Missouri, the ACLU and the gathering's organizer, Reproaction—to the front lawn of the life-affirming nonprofit, according to Thrive president Bridget VanMeans.

Calling for changes in everything from racial injustice in policing to equal rights for transgendered individuals, the protesters’ choice of Thrive was an evident tip-off to their primary agenda of promoting abortion.

“It’s actually quite an honor that they would select a pregnancy resource center to launch a statewide political attack,” VanMeans said. “They know we are worthy and significant enough to be the launch for that—that is huge. Up until now, they’ve basically seen PRCs as just ridiculous old ladies with Bibles, but they chose Thrive because they know the spiritual epicenter is right here.”

Recent recipients of an ultrasound machine through the Southern Baptist Convention’s Ethics and Religious Liberties Committee that now bumps its fleet of mobile ultrasound units to four, plus three brick-and-mortar locations, Thrive provided 8,445 points of free service for community members in 2015.

The one “service” Thrive does not offer is abortion, which is what drew protesters like Cicely Paine, a “sexuality educator and abortion doula” who sits on the board for Community Birth and Wellness Center in St. Louis, according to her profile at CoreAlign.org.

Paine, who chronicled her demonstration on social media, at one point mocked Thrive’s staff via Instagram for bringing her and other campaigners cookies.

It turns out it wasn’t Thrive’s staff, but volunteers with Coalition for Life St. Louis who had heard about the protest and showed up—cookies and cool water in hand—in two carloads to dialogue with Paine and her fellow abortion advocates.

“That says a lot about our statewide unity,” VanMeans said. “We have a totally unified effort. Our mobile units work with their sidewalk counselors. We couldn’t do what we do without them and they couldn’t do what they do without us. They just called and they said, ‘We’re coming down.’”

The unity of the pro-life movement in Missouri—which NARAL gives an “F” on its nationwide “2016 Report Card on Women’s Reproductive Rights”—was showcased last August during the rallies stemming from the Center for Medical Progress’ release of videos chronicling Planned Parenthood’s systemic involvement in the illegal trafficking of body parts harvested from aborted babies.

At one protest Aug. 22, 2015 at a Planned Parenthood in St. Louis that commits 7,000 abortions per year, one mother who had gone in for an abortion eventually changed her mind and left instead, intent on keeping the baby she had gone in to abort.

Following the exchange in front of her center Wednesday, VanMeans said she is expecting the Supreme Court’s decision to strike down commonsense abortion regulations in Whole Woman’s Health v. Hellerstedt to be the opening salvo in an aggressive campaign to push for more abortions in Missouri, as well as other states targeted by NARAL.

“We work in complete lockstep with our lawmakers, every pro-life lobbyist in the state of Missouri, with 40 Days for Life across the state, and as many PRCs as will catch the vision,” VanMeans said. “We have hair’s breadth, intimate personal relationships working together, and that’s why we are NARAL ‘F’-rated.

“[NARAL] is identifying all of their ‘D’ and ‘F’ states, and that means all of the PRCs are going to be likely under attack. If you’re in a ‘D’ or an ‘F,’ you’re in the crosshairs.”

After Whole Women’s, a Gathering Storm

According to NARAL’s report, only 21 states in the Union receive a passing grade—with even Pennsylvania, whose lack of oversight allowed Kermit Gosnell to operate his “House of Horrors” clinic for decades—flunking the test.

In the past year, NARAL has backed recent legislation in California and Illinois that would force pro-life organizations and—in the case of Illinois, all medical personnel—to refer for abortions in violation of their deeply held religious convictions.

At Wednesday’s gathering, protesters aimed their fire at the Missouri Senate’s Committee on the Sanctity of Life, criticizing the committee for a wide-ranging sweep of issues that includes its committed pro-life stand.

One of 10 states to re-route funding away from Planned Parenthood in the past year, Missouri’s legislators are also responsible for passing laws regulating health and safety for abortion. Missouri lawmakers have also established and expanded the Alternatives to Abortion Program while providing a tax credit for donors who support qualifying pregnancy centers throughout the state.

Protesting outside of Thrive’s main location Wednesday, Reproaction founder Pamela Merritt lamented in a NARAL tweet that “Black babies & mothers in #STL die at 4x rate but aren’t being addressed in” the Missouri Legislature.

Even as Merritt and her fellow congregants prepared to assemble at Thrive, Walter B. Hoye II, president of the Issues4LifeFoundation, sent out a press release announcing that abortions in the Black community outnumber homicides by a 69 to 1 margin.

“They’re really mad about this pro-life legislation,” VanMeans said. “The Supreme Court decision on Monday gave them motivation to go after it hard here in Missouri. The timing is, ‘Oh, we’ve got them now.’”

Deeper than an Industry

One opponent to Missouri’s pro-life legislation requiring informed consent and a 72-hour waiting period to obtain an abortion that may seem like an outlier, the St. Louis chapter of the Satanic Temple, hailed Monday’s Supreme Court decision on its website and straightforwardly claimed abortion as a sacrament in a recent lawsuit fighting the legislation.

VanMeans said she and her organization have been a target of the Temple—300 members strong in St. Louis—since announcing their vision to drive abortion out of existence back in 2011.

For VanMeans, the root of abortion runs much deeper than the problematic billion-dollar industry that claims over a million preborn lives each year in the U.S. alone.

“It's important for a variety of reasons that we understand the nature of the enemy that has all of us in its crosshairs. The heightened satanic warfare is very real and will require new levels of spiritual intensity, understanding and maturity from our movement.”