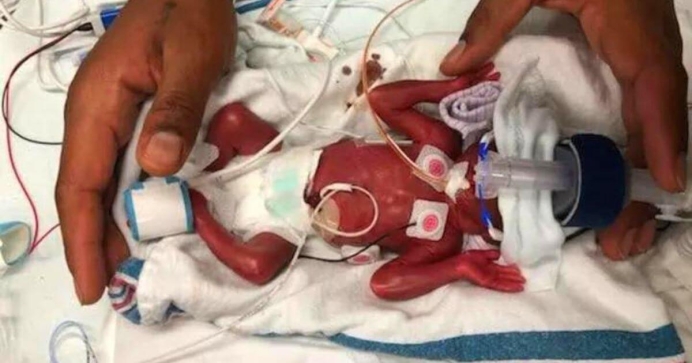 (Right to Life UK) A micro-preemie born at just 23 weeks gestation has just celebrated his first birthday after spending 155 days in hospital and defying all the odds.

Baby Amandi was born on 10 January 2022, weighing only 1lb 5oz in Austin, Texas. He was born a week before the abortion limit in the UK and doctors thought that he only had about a 10% chance of survival.

His parents, Tolulope Omokore and Patrick Allen, were expecting twins but sadly, in January 2022, when Tolulope was a little over 22 weeks pregnant, she started to bleed. She went into hospital and discovered that one of her twins, who she named Asaiah had died in utero. Tolulope had experienced a rupture of her amniotic sac.

Her doctors were very concerned for her and her other baby. They told her that she would have to stay in hospital until she gave birth in May. Doctors did everything they could to delay labour as long as possible because each week in the womb improved her son’s chances of survival outside the womb.

But baby Amandi had other plans and was born at just 23 weeks weighing as much as a bag of sugar.

“I’m thinking, I’ve just lost one – am I going to lose both of them?” his mother said.

“I was able to hold Asaiah, but they took Amandi straight from me to the incubator because, of course, every second counts. And I’m thinking, I’ve just lost one — am I going to lose both of them?”

“It was a very bittersweet moment”, Tolulope said.

Because Amandi was so premature, he had to be put on a ventilator and his lung collapsed. He also had to have a feeding tube put in, he developed pneumonia and had a pulmonary haemorrhage.

Samantha Smith, the neonatal nurse practitioner at Pediatrix Neonatology of Texas and Ascension Seton Medical Center said “He was relatively stable for a baby that age and size”.

“But we use the words ‘critically stable’ because they are such premature infants. He’s quite the survivor”.

Tweet This: A micro-preemie born @23 weeks gestation just celebrated his 1st birthday after doctors thought he only had about a 10% chance of survival.

“Everyone was clapping and crying. I was hugging everyone”.

Amandi’s mum, Tolulope, did everything she could to learn about her son’s medical conditions and what she could do to help, and she was finally able to hold her son for the first time when he was two weeks old.

“That was amazing”, she said.

“But it was also nerve-wracking because he was intubated. They were so careful. And he loved it. I was warm and he was warm. They said skin-to-skin is so good. And I was like, ‘Wow.’”

Because baby Amandi was in hospital for so long, his mother had to go back to work. She worked from home from 8am to 5pm but would leave as soon as she could and even take calls from customers in the hospital lobby.

Amandi kept getting stronger though and after five months in intensive care, he was able to ‘graduate’. The staff lined up in the hallway and clapped and cheered for Amandi and his parents as they were able to go home.

“Everyone was clapping and crying. I was hugging everyone. And I was thinking about Asaiah as well”.

Almost four out of five babies born prematurely between 22 and 28 weeks gestation survive to discharge from the hospital according to recent research.

A study, ‘Mortality, In-Hospital Morbidity, Care Practices, and 2-Year Outcomes for Extremely Preterm Infants in the US, 2013-2018’, by Dr Edward F Bell of the University of Iowa, found that from 2013 to 2018, with infants born between 22 and 28 weeks gestation, “survival to discharge occurred in 78.3% and was significantly improved compared with a historical rate of 76.0% among infants born in 2008-2012”.

This means that almost four out of five extremely prematurely born babies survived and were able to be assessed at 22-26 months corrected age (22-26 months from their due date) for a number of health and functional outcomes.