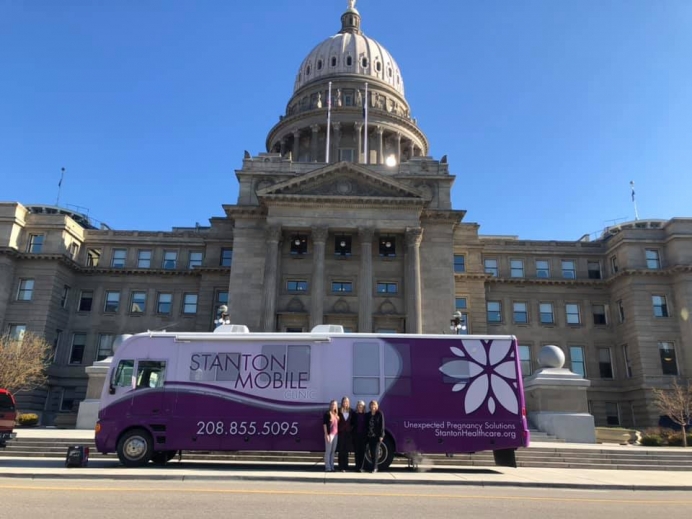 Update: The Idaho heartbeat bill passed in the state's house on Friday. It will now head to the senate where pro-life advocates pray it will receive a floor vote.

Stanton Healthcare was founded in Idaho in 2006 by human rights advocate, Brandi Swindell. This organization has remained persistent in championing pro-life issues in the public arena.

Stanton staff members themselves testified before the Senate State Affairs Committee recently and also set up Stanton’s mobile clinic unit to conduct ultrasounds in front of the Capital. State legislators and members of the press were invited to attend the ultrasounds and tour the Stanton Mobile clinic after the Senate Committee vote.

In a press release Swindell stated, “Stanton is honored to have legislators and the press see and hear what we do every day at our clinics. That is, the precious heartbeats of these beautiful children in their mother’s womb. We believe this ‘Heartbeat Bill’ will be a powerful step in bringing an end to abortion violence by giving women medically accurate information and ensuring every child in Idaho is protected and treated with equality."

The Idaho bill would stop those who currently stop beating hearts for a living. It would also allow women who receive abortions to sue the abortion provider.

The bill has yet to return to the full senate for a vote but Linda Thomas, director of community outreach for Stanton stated, “If it simply can get through the house and return to the senate before the end of the session, which will be soon, then it will pass. The struggle is getting it to the floor for a vote.”

Thomas is hopeful pro-life supporters in Idaho will contact their senators and representatives asking them to support these bills (in the senate, SB 1085 and house, HB 366).

Nationwide heartbeat laws have passed in Missouri, Texas, Georgia, South Carolina, Ohio, Mississippi and Kentucky within the last several months. In 2013 North Dakota was the first to pass one which was struck down in court two years later.

Iowa was second in 2018 but in January of this year it was blocked by a judge. Florida’s bill presented in 2019 died in committee. Alabama has been successful in instituting the law. Louisiana is in process with a Heartbeat bill.

Most of these states are facing court challenges or have already experienced a block or a temporary block by a judge. This has supporters of the bill in Idaho working with staunch diligence toward wording the proposed law so that it withstands legal opposition.

A reading of the Idaho legislation demonstrates it is meticulous in defining the parameters of abortion, fetal heartbeat, fetus, preborn child, gestational age and medical emergency. It also links the definition of death as it already stands from a cardiopulmonary model to the legal standard for life when a heartbeat is present.

Having set the parameters for life, then the measure goes on to specifically state the illegality of abortions performed when a heartbeat has been detected citing exceptions of a medical emergency, rape and incest. The penalty for the doctor performing or medical staff assisting in an abortion is two to five years in prison and the suspension of the medical license of the offender with it being revoked with a second offense.

Several witnesses testified before the senate committee in support of the legislation on March 17, including Stanton Healthcare representatives.

“At Stanton, we want every woman to be educated about what is happening in her body before she makes a very weighty decision that will follow her for the rest of her life,” said McKinzy Troudt, Registered Diagnostic Medical Sonographer (RDMS) with Stanton Healthcare.

Samantha Doty, PA, director of clinical services at Stanton, testified to the scientific details of the developing heart of the fetus.

“The importance of a beating heart is as important at the end of life as it is at the beginning,” Doty said. “When an abortion is performed, a heart that once was beating is forever stopped and a life is ended.”

Doty further cited an Idaho statute where an embryo or fetus is included in charges of murder, querying, “How is it that the courts recognize the unborn baby as an individual human being in the case of homicide, but ignore the same fact in the setting of abortions?”

Doty continued, “Abortion is not women’s health care. Medical professionals take an oath to ‘do no harm.’ If ending the heartbeat of a tiny baby is not the epitome of ‘harm,’ then I don’t know what is.”

The Stanton Mobile is outside the Idaho State Capitol where tours are taking place! The rest of our Stanton Team is...

As director of Community Outreach with Stanton, Thomas stated to the committee, “On January 15, 1993, I had an abortion. I believed I had no choice. And 28 years later, it remains the biggest regret of my life and a pain that will never truly go away—because my child is missing from this world.”

Thomas described the facts of development which would have been true of her 8-week fetus and added, “He was a perfect human life that no one in the abortion clinic gave me the opportunity to see. No one offered information about his development, or other options I could consider. No one shared anything about the trauma and grief that may follow.”

Thomas detailed the services offered at Stanton and then linked meeting women’s needs to offsetting the negative consequences of abortion.

She stated, “We know countless women who wish abortion had been illegal at the time of their abortion, myself included. If a Heartbeat Bill had existed, my child and so many others would be here.”

Tweet This: We believe this heartbeat bill will be a powerful step to bring an end to abortion violence by giving women medically accurate information

Expanding the human rights outreach for life beyond the U.S., Stanton International seeks to replace abortion businesses around the world because they believe that women and their families are entitled to quality, coercion-free care, and compassionate alternatives to abortion.

Stanton is named after Elizabeth Cady Stanton who spoke staunchly against the abuse of women, children, and African Americans. She opposed exploitation in all its brutal forms.

In an 1872 letter to Julia Ward Howe, Stanton was quick to note a remarkable double standard: “When we consider that women have been treated as property, it is degrading to women that we should treat our children as property to dispose of as we see fit.”

Stanton is asking for support of this effort with Idaho’s Fetal Heartbeat Preborn Child Protection Act with prayers, and for Idaho residents to reach out to their representative immediately, asking both senators and house representatives to bring the Act to a vote and support the legislation.