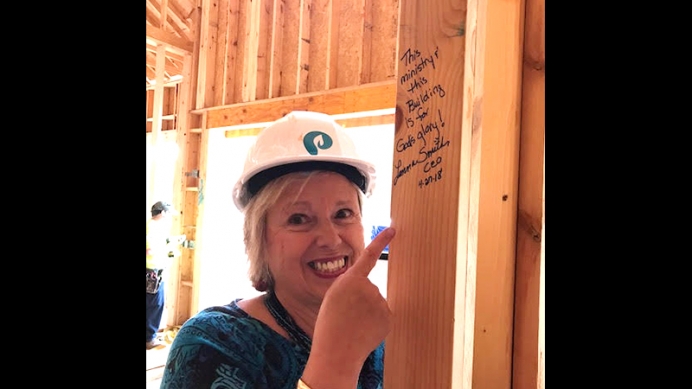 Lenna Smith, CEO of Piedmont Women's Center in Greenville, South Carolina, points to the first words written on the building's walls: "This ministry and this building are for God’s glory." Photo Courtesy: Lenna Smith

Twenty-six years ago, when Lenna Fox Smith volunteered to make curtains for Piedmont Women’s Center in Greenville, South Carolina, she had no idea that God was calling her to something much bigger. The center was only about a year old, and what started out as volunteer work one day a week, quickly turned into a job as the center’s CEO.

Now, as Smith gets set to retire at the end of December, the center will say goodbye to their 1,200 square foot house next to an abortion clinic and move into a nearly 8,000 square foot brand-new building across the street that is literally covered in scripture.

The first client that ever came into Piedmont Women’s Center back in 1991 was heading to the abortion clinic next door and ended up on the front porch of the pro-life center by mistake. But that first client decided to stay and wait for the counselors to arrive for the day, and that baby was saved from abortion.

Smith says that they are always experiencing “divine appointments” like that first one. In fact, according to Brenda Bagwell, RN and Director of Medical Services, 177 women came to Piedmont Women’s Center from the neighboring abortion facility in 2017 alone. While there is the occasional woman who decides to continue to the abortion facility, Bagwell says that many women choose to stay once they learn of the free services that Piedmont Women’s Center offers.

The center was originally opened by a small group of Christians who came together to purchase a house located next to an abortion facility. They took a mortgage out on the 85-year-old home and then asked the community for help. And help they did.

“They can’t write a check but they can help us with our needs,” said Smith. “Air conditioning, plumbing, concrete companies. Six or seven concrete companies came. We’ve got these big lights shining on our property at 6 a.m. with trucks full of laborers. They dumped concrete and all got out and spread it together. Other companies and people in churches who couldn’t take on a whole project but come together to do heating and air. We put out the call with work days and men showed up like an old barn raising.” 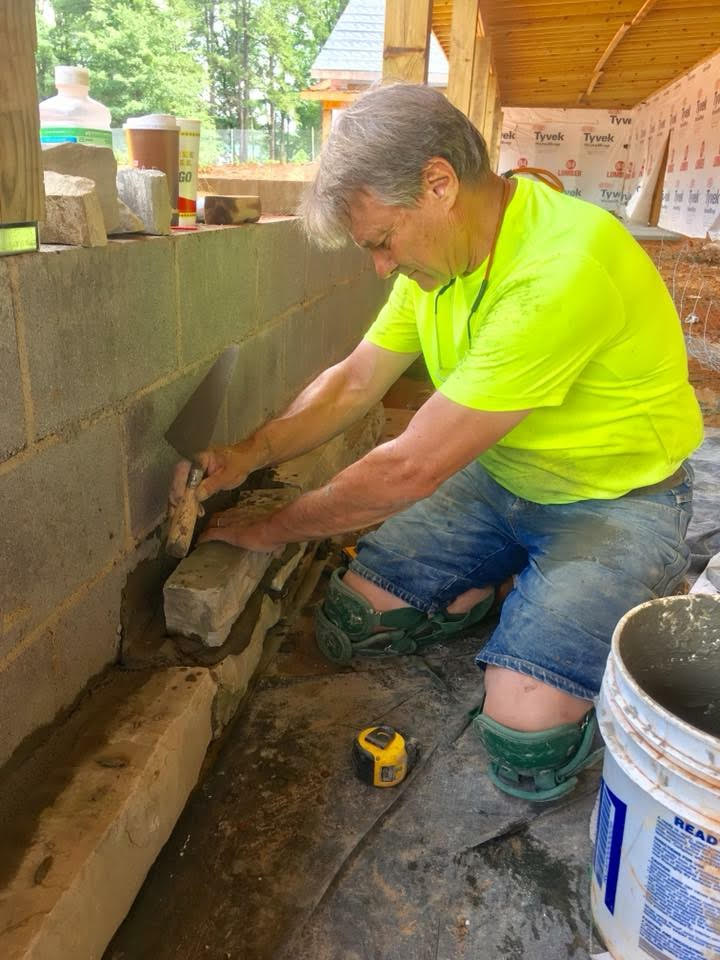 After purchasing the plot of land across the street with money from a generous donor, Piedmont Women’s Center cleared the land and began building with the help of local companies. Smith wanted the people who were involved to be able to express their feelings and thoughts about the new building and the pro-life work being done there.

“We wanted to give everybody a way to express how grateful they are for what God’s doing to protect the lives of the unborn,” she explained. “We put the word out to come write scriptures on the frames. Nobody comes and just writes a scripture. They stay and pray. My first words on the wall were, ‘This ministry and this building are for God’s glory.’”

People of all ages have come a to write scripture on the framing of the new building. Smith says that they come into the center knowing exactly what they are going to write. There was a two-year-old with a sharpie marker in his hand scribbling on the wall wanting to write that Jesus loves them. There was a woman with an oxygen tank who wanted to write a scripture passage that God had given specifically to her for the center. Then there was a woman with a long piece of scripture who walked the building with Smith reading it aloud as Smith prayed.

Tweet This: From a 2-year-old with a sharpie to a woman with an oxygen tank, supporters are showing up to shroud this center in scripture. #prolife

“It was very meaningful,” said Smith. “If you just go back to Deuteronomy where we are told to write on the door frame of our house, we are living that out. They tell us to be strong and courageous. God is intentionally giving them the words to write on the door frames. It’s a beautiful thing to walk in and see on the beams. It moves your heart to know that this is God’s plan and He’s doing it in His way and He’s doing it quickly.” 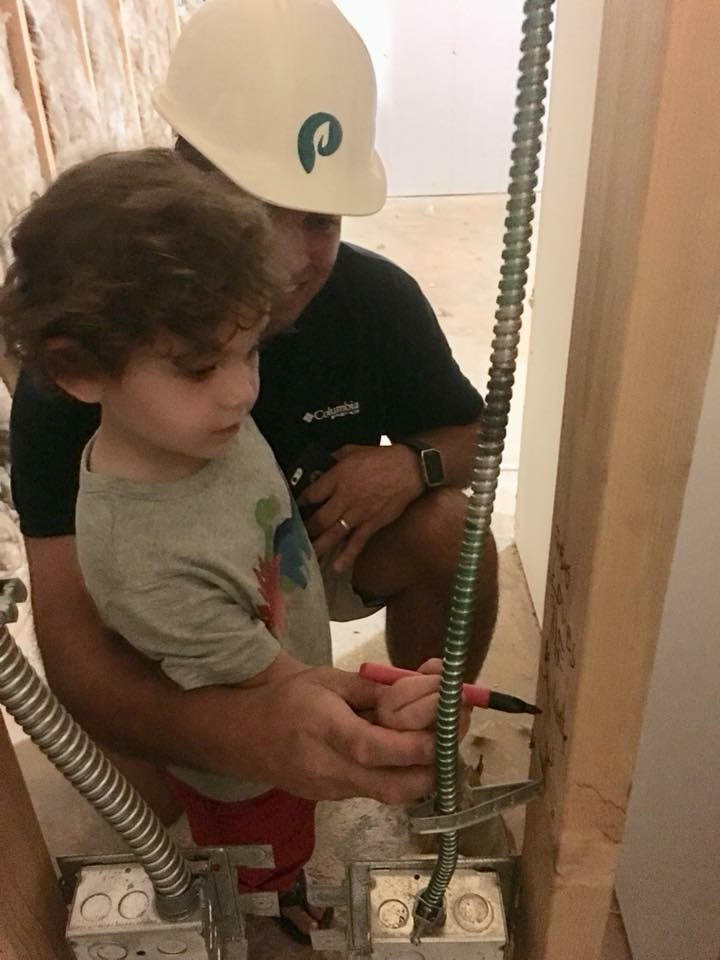 With an appointment book and space that are both filled to capacity, the new facility can’t be finished soon enough for Smith and her team. They will be able to serve more women and babies than before with three times the counseling space, two ultrasound machines, space for their 150 volunteers to do their work, a larger training room for volunteers and staff, and plenty of room for their medical team to work. Piedmont Women’s Center became a medical clinic under the supervision of a doctor back in 2000.

That medical staff is well trained with over 15 nurses prepared to perform ultrasounds and four doctors to read those ultrasounds. Bagwell says that she first joined Piedmont Women’s Center as a volunteer in 1999, but as with Smith, it became her full-time work. Today, she works hard to ensure that the center’s medical license and the licenses of the doctors and nurses who volunteer are protected and that the center staff and volunteers are held to high standards.

“I volunteered for four hours per week doing the free ultrasounds once I was trained for eight years,” she said. “Then I came on staff as full-time director of medical services nine and a half years ago in 2009 and I’ve always loved pregnancy center work and wanted to be a part of it.”

Piedmont Women’s Center offers free pregnancy tests and ultrasounds, and clients are referred for medical care, Medicaid, parenting classes, and birthing classes. The center also helps women who are dealing with post-abortion grief. Each pregnant client receives vouchers to another local ministry that provides maternity clothes and baby clothes. They also receive a baby bundle worth about $150 in baby gear that has been donated from baby showers run by churches. The bundles include everything from diapers to onesies to bottles.

“It’s a baby shower in a bag,” said Smith. “We have a couple of women who take home every stuffed animal that we get and wash them and coordinate a baby blanket that matches and they put them on top of the bundle. It just makes you smile that somebody really cares enough to do this.”

When they are ready to open the doors to their new center in the first days of 2019, Smith plans on it being a “beacon of hope” for women and couples facing unplanned pregnancies. According to Bagwell, the new facility will allow them to provide free STI testing and eventually gynecological services in addition to all of the other services they already provide.

“The warfare is intense and you’re going to see and hear things you wish you never did,” said Smith. “But God is winning this battle for us. He has the victory.”

Since 1991, Piedmont Women’s Center has saved 7,500 babies from abortion. With their new building, the support of the community, and God’s grace they are ready to save thousands more. The writing is on the wall. 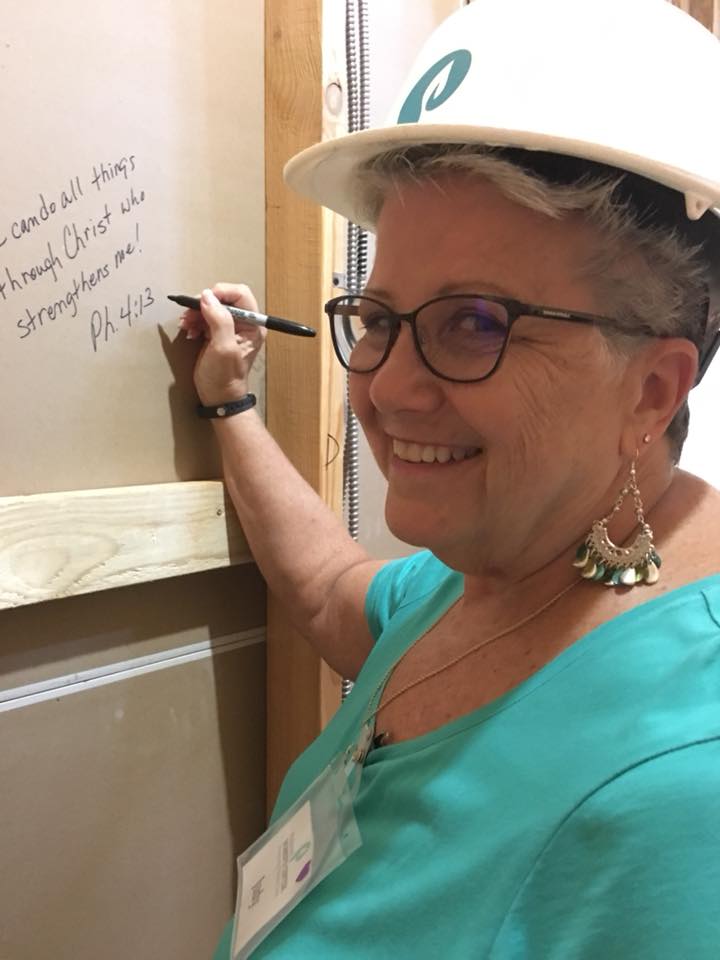 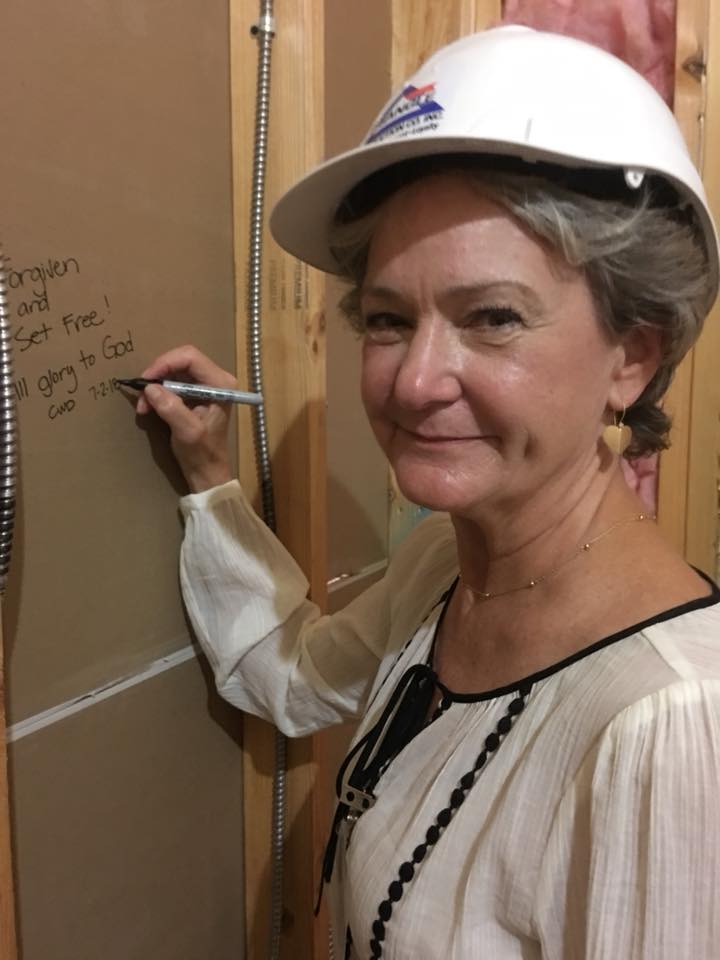 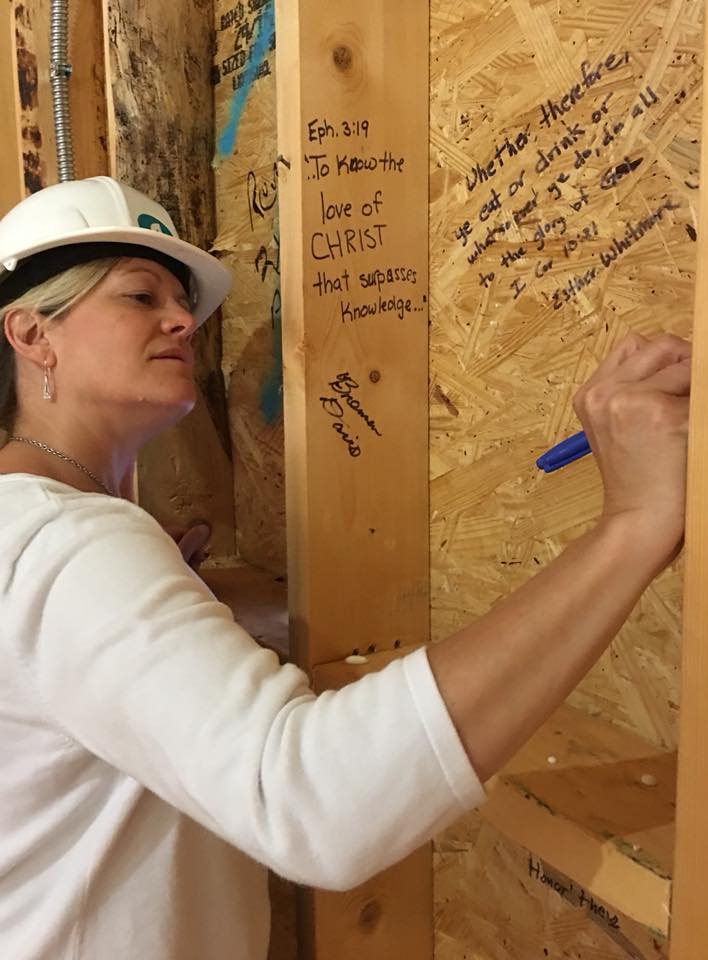 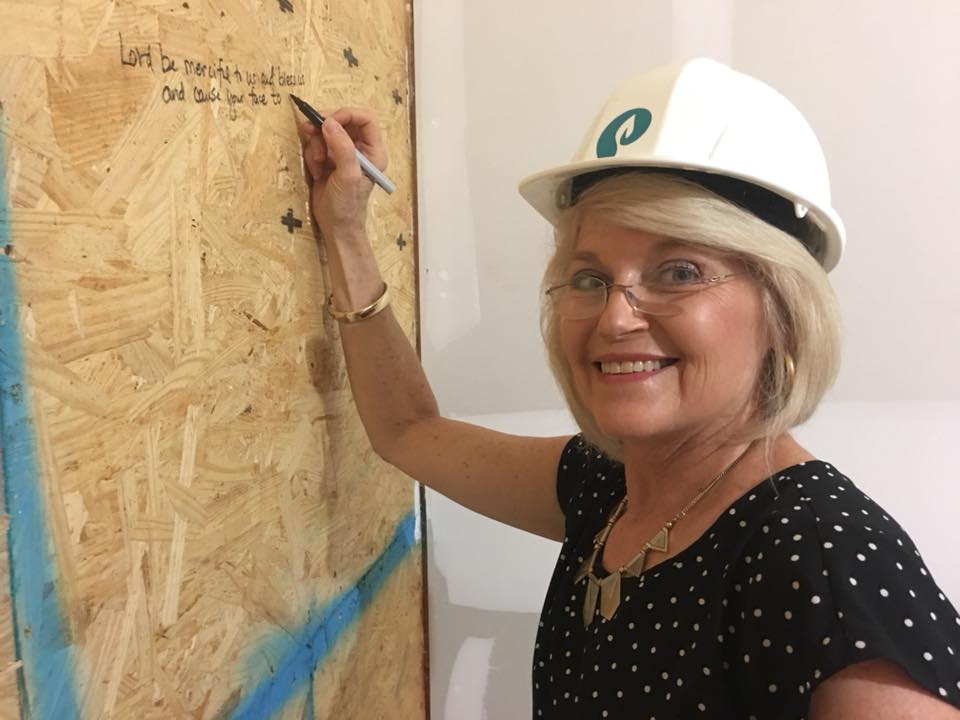 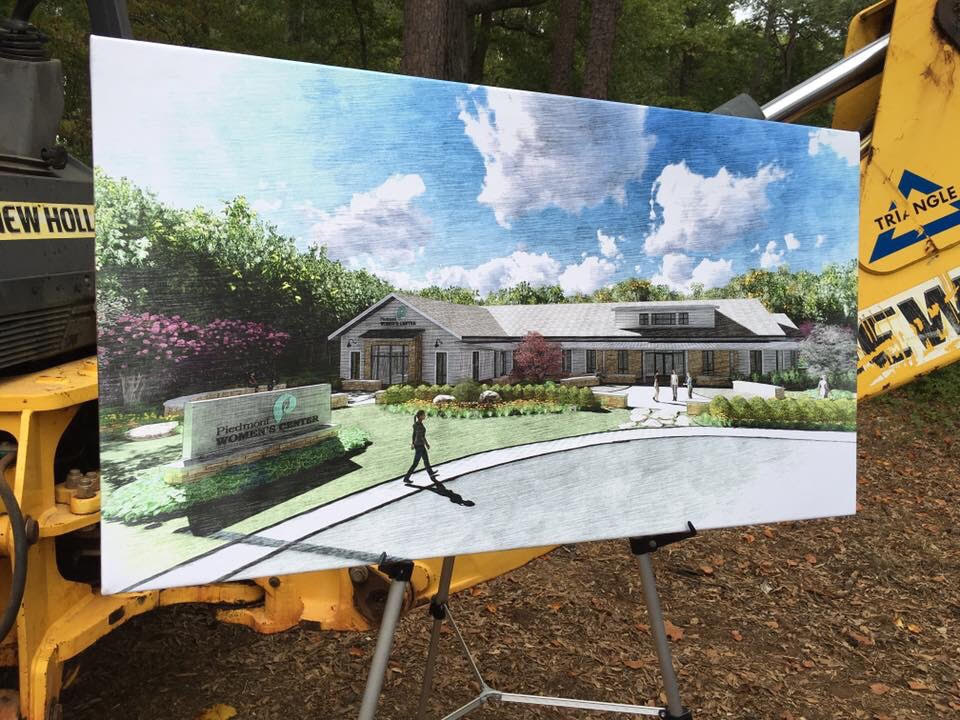