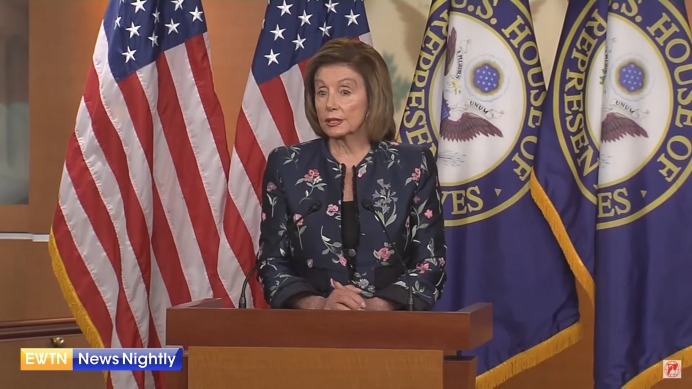 In remarks at her weekly press conference in the U.S. Capitol on Thursday, Pelosi said she supports a repeal of Hyde because it is “an issue of health, of many women in America, especially those in lower-income situations and in different states.”

“And it is something that has been a priority for many of us for a long time,” Pelosi said.

She cited her faith, noting that as “a devout Catholic and mother of five in six years, I feel that God blessed my husband and me with our beautiful family, five children in six years almost to the day.”

She added that she would not presume to make decisions for other women, regarding their families and abortion.

Pelosi said that “it’s not up to me to dictate that that’s what other people should do, and it [funding of abortion in Medicaid] is an issue of fairness and justice for poorer women in our country.”

President Joe Biden did not include the Hyde Amendment in his budget request to Congress for the 2022 fiscal year; leading Democrats have pushed for an end to the policy in recent years. The Labor, Health and Human Services, Education, and Related Agencies appropriations bill recently advanced out of the House Appropriations Committee without the amendment language.

The Hyde Amendment, named for the late Rep. Henry Hyde of Illinois, was first enacted in 1976, three years after the U.S. Supreme Court’s 1973 Roe v. Wade decision that legalized abortion nationwide. Exceptions were later added to the policy for cases involving rape, incest or a maternal mortality risk.

Since the amendment is not permanent law, it must be attached to individual appropriations bills, or it will not take effect.

The U.S. bishops’ conference has called on lawmakers to preserve the Hyde Amendment, and is currently circulating a petition in support of the pro-life policy which currently has more than 130,000 signatures.

In January, Pelosi said pro-lifers who voted for former President Donald Trump because of the abortion issue gave her “great grief as a Catholic,” and also defended use of contraception. In response, her local ordinary - Archbishop Salvatore Cordileone of San Francisco - said that she “does not speak for the Catholic Church."

During a podcast with former senator and 2016 Democratic presidential nominee Hillary Clinton, Pelosi said that pro-lifers who chose to vote for Trump “were willing to sell the whole democracy down the river for that one issue.”

In a subsequent statement, Archbishop Salvatore Cordileone of San Francisco, said that “No Catholic in good conscience can favor abortion.”

“Our land is soaked with the blood of the innocent, and it must stop,” Cordileone said.

Tweet This: “Our land is soaked with the blood of the innocent & it must stop/No Catholic in good conscience can favor abortion"- Archbishop Cordileone

Pelosi has long supported legal abortion. In June, she told a reporter that “I am a big supporter of Roe v. Wade. I am a mother of five children in six years. I think I have some standing on this issue, as to respecting a woman’s right to choose.”

In May, Pelosi said she was “pleased” with a Vatican letter to the U.S. bishops which addressed Communion for pro-abortion politicians. She claimed the Vatican instructed the bishops not to be “divisive” on the issue.

In response, Archbishop Cordileone said the Vatican actually promoted “dialogue” between bishops and pro-abortion politicians, “to help them understand the grave evil they are helping to perpetrate and accompany them to a change of heart.”

“I’m happy to know that Speaker Pelosi said she is pleased with the letter,” Archbishop Cordileone said. “Speaker Pelosi’s positive reaction” to the letter, he noted, “raises hope that progress can be made in this most serious matter.”