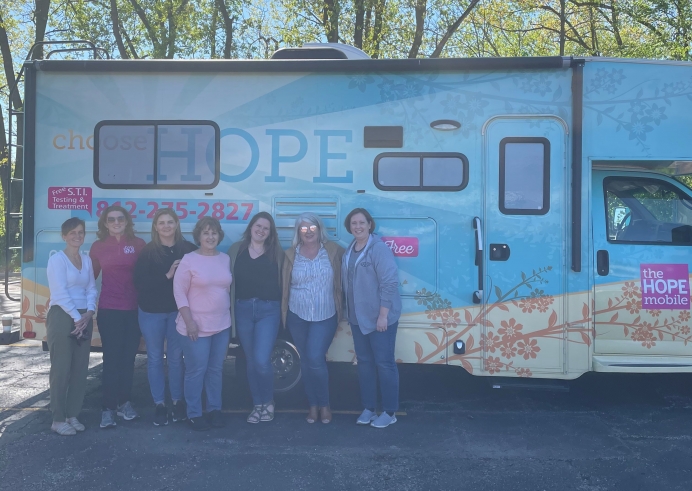 The Women’s Care Center in Peoria, Ill, was lost overnight in the early hours of Monday in a fire authorities are calling arson. But the center’s director said her organization is not ceased services and remains focused on clients.

“We’ve been keeping close contact with our clients,” Connie McClure told Pregnancy Help News. “Our doors are open, and our services will not stop.”

According to reports, firefighters answered a call for 7319 N. University St. around 2:40 a.m. Monday, to find heavy fire coming from the windows in the front of the building.

McClure got the phone call around 2:30 a.m. from the center’s security company, she said, and by the time she got there the center was up in flames. Police and fire crews, whom she said have been phenomenal to deal with, were on scene.

The fire destroyed one large room, and the whole building had extensive damage from heat and smoke. Officials put the damage cost at $250,000. They say the fire was intentionally set.

The investigation is ongoing, McClure said, they are trying to honor that, “and stay really focused on our clients.”

They lost everything in the fire, she said.

“There was not a diaper available,” said McClure.

“Fire destroyed our building but not our spirit,” McClure had posted on the center’s Facebook page.

“It was really hard to see,” she told Pregnancy Help News of coming upon the scene with the fire in progress, but the center has continued to serve clients.

The next morning WCC counselors from the center were on the phone contacting clients to reschedule appointments. They even saw two clients in the parking lot.

“My staff has really rallied, and the community has been amazing,” McClure said.

She said the hope to be back in a brick-and-mortar center within weeks, but clients will be served in the meantime no matter what.

This is being made possible in part through the temporary donation of a mobile unit from Hope Resource Center in Bedford, Indiana.

Another pregnancy help center, Pregnancy Resources in Davenport, IA, also offered the use of a mobile unit.

“It was a very kind offer,” said McClure.

A truck also came from the center’s corporate office in South Bend, bringing all sorts of items, such as diapers and prenatal vitamins, she said, “everything we need to operate.”

WCC is part of a group of 32 centers in 11 states. The Peoria location serves roughly 500 women in the area.

“When that van pulled up, we were all in tears,” McClure said.

The truck’s presence at the site drew other donations, as a woman passing by saw the truck at the center and stopped, asking whether they were taking donations. She then dropped the materials she had to donate.

“We are just feeling so grateful,” said McClure.

They continue to find their way amidst the very fluid situation.

“It’s been quite a week,” McClure said. “We’re just trying to figure out how to regroup and take our next steps.”

Parenting classes are conducted on Zoom and are carrying on as normal. McClure said the next one celebrates moms with Mother’s Day upon us.

Celebrating moms is important, said McClure, “that’s what we do.”

One in five babies born in Peoria County get their start with Women’s Care Center, she said.

Reiterating that the focus is on clients, she stated, “It’s just going to look a little different for a while.”

McClure emphasizes the center’s mission and the corresponding community response to their moment of need from in and outside of the pregnancy help movement.

“Women’s Care Center isn’t a building, it’s so much more than that,” she said. “It’s about people, it’s not about four walls.”

Tweet This: “Women’s Care Center isn’t a building, it’s so much more than that. It’s about people, it’s not about four walls.”

“It isn’t about the building,” she added. “It is about the fact that our community gets really big when good things like this (response) happen.”

The Women’s Care Center is accepting donations, and McClure said the need is great.

Donations can be made on the center website HERE. Note: Look for the "Pick your Location" button and then choose Illinois for the state and Peoria for the city. 100% of these gifts will go to the Women's Care Center in Peoria.

Donation inquiries can also be made to Christine Dennis at This email address is being protected from spambots. You need JavaScript enabled to view it. or mailed to 7319 North University, Peoria, Illinois 61614.