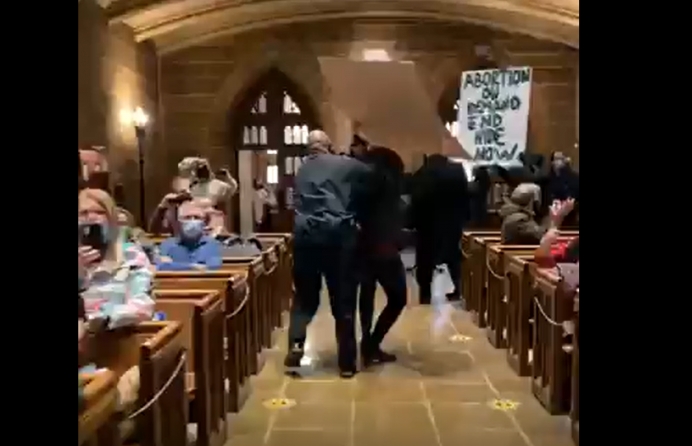 As four abortion activists face charges for the invasion of a Catholic Mass celebrated recently in remembrance of the millions of lives lost to abortion, Peggy Hartshorn reflected on the chilling and hate-filled protest she and many others endured.

A Respect Life Mass was held on January 22 at St. Joseph Cathedral in Columbus, Ohio, to honor the 62 million U.S. lives snuffed out from abortion since Roe v. Wade legalized the practice throughout pregnancy nationwide in 1973.

Hartshorn, veteran pro-life advocate and longtime Heartbeat International President and Board Chair, attended that day with her husband because she is convicted in the fact that the Roe v. Wade anniversary should not pass without proper observance for those lives lost to abortion.

Due to COVID space restrictions, the Mass was being live-streamed, but every Catholic school in the diocese had been invited to send one family representing their school to the Mass, and many students were watching the live-stream from their classrooms. Social distancing and other COVID-related precautions were in practice inside the church.

“The pews were filled with fathers, mothers, grandparents and many children,” she recalled. “Everyone was looking straight ahead, listening attentively to the bishop’s words. It was very quiet and reverent; the bishop was positive and encouraging.”

And that’s when everyone heard the loud bang — followed by further awful noise.

“Protesters were coming down the center aisle and two side aisles screaming and carrying signs,” she said. “They converged in front of the church between the pews and the altar area, still screaming and chanting.”

In a state of detached shock, Hartshorn slowly began to understand the chants.

She said her husband heard the “F-word” peppered throughout the church by the protestors.

Hartshorn watched as one of the priests, who she described as “very tall and imposing,” made his way to the entrance of the sanctuary in an effort to block additional protestors from coming directly into the sacred main altar space — where only the priest and other ministers go. It’s also where the tabernacle is, which contains the Blessed Sacrament, or Eucharist. This is the most sacred part of the church.

Simultaneously, two male staff members of the Columbus diocese who had been standing in the back of the church were joined by a couple of Knights of Columbus and a security guard to surround the protestors.

Now encircled, the intruders were walked to the back of the Cathedral and out the doors. Within five minutes, things began to calm inside the church.

“The bishop got up again the apologized to all the families there, and especially to the children, for what had happened,” Hartshorn said. “He kept saying he was so sorry for what they had to see and hear.”

Some of those children were sobbing — with one declaring he never wanted to go to church again.

As the protestors were forced out of the building, she turned to look at the congregation and saw many of the families were on their knees praying.

The bishop resumed the Mass, but the ousted invaders weren’t done.

“They stayed there, filming themselves, using profanity, and berating the police who had arrived at the Cathedral,” she said.

The pro-abortion assailants carried signs with slogans such as, “Fund abortion, not cops,” and “Abortion on Demand. End Hyde Now,” an apparent reference to the Hyde Amendment, which had prohibited most federal funding for abortion. At few of the aggressors were wearing vests that said “clinic escort” on the back.

Seeing those vests caused a lightbulb to go off in Hartshorn’s head.

She had the sudden sense that the women attacking the cathedral — like nearly all pro-abortion protestors she had encountered before — had likely experienced abortions themselves.

“They were defending their past actions to keep themselves in denial about the reality of what they had done so they didn’t have to face their pain,” she said.  “What they really needed was to know that they can be forgiven and find peace.”

Tweet This: Abortion activists are often themselves post-abortive, and need to know that they can be forgiven and find peace.

Witnessing women display such anger and pain only served to further dial up Hartshorn’s passion for the mission of Heartbeat International: reaching vulnerable women before they decide to end the lives of their unborn children.

Once they go down that path, the inevitable result is often a horrific tailspin.

“We are here to rescue them from despair and hopelessness — and even from the evil one himself — and give them hope and a future,” she said.

Once outside the protestors screamed that police had shown up at the cathedral but had never taken such action when pro-lifers had been present at the local abortion clinic, which they falsely denounced as “violence from 40 Days for Life.”

“I thought how ignorant, confused, and filled with anger they were,” Hartshorn recalled.

Shawn Carney, president and CEO of 40 Days for Life, agreed with Hartshorn.

“It’s ridiculous,” he said. “We have a track record of 14 years of no violence at any abortion facility. Our members sign statements of peace. There have never been any violent incidents. There’s no evidence of any at all.”

When violence has erupted at abortion facilities, 40 Days for Life has never been involved. Even the secular media has confirmed it, Carney said.

Still not done with spreading malice, the protestors transferred their bedlam a few blocks to the Ohio State House, where a Roe Remembrance rally had been scheduled following the Mass.

Hartshorn had been asked to speak at that rally about Heartbeat International’s Abortion Pill Rescue Network. The pro-abortion group continued there with its loud and vulgar disruption.

“It was very hard to concentrate as I spoke,” she said, “but I felt the Holy Spirit helping me and I could see in the faces of those present that they were touched and encouraged by the stories and also by the words of the other speakers, including the Bishop of Cleveland, despite the hateful words from the protesters yelling into the bullhorns behind them.”

Despite living in Texas, Carney is well aware of the events in Columbus and admonished the protestors.

“The left has evolved into a mob of violence,” he said. “Every cause, whether reasonable or not, has led to their response being to push and scream and storm private property.”

“There’s no reason or logic.” Carney said. “There’s just screaming. This is a huge problem for the abortion industry and their supporters.”

If he could speak with the protestors, he would tell them their action matches what they support.

“Abortion is chaotic and violent,” said Carney. “It ignores reason, science, and God. That’s what abortion's supporters also do in order to justify it.”

Tweet This: “Abortion is chaotic and violent. It ignores reason, science, and God. That’s what abortion's supporters also do in order to justify it.”

And if he could address the cathedral’s congregation, Carney said he’d affirm that this is why pro-life supporters peacefully pray.

“This is why we depend on God,” he said. “We’re not a mob; we bow our head in prayer and we peacefully exercise our freedom in the streets.”

“We’re approachable no matter who you are or where you come from,” Carney continued. “Abortion activists don’t have that and that’s why more people over the years become more pro-life after earlier supporting abortion. The conversation only swings to the side of life.”

Beth Vanderkooi, executive director of Greater Columbus Right to Life (GCTRL), was equally horrified at the cathedral attack. She released a statement, which read in part:

“There is no justification to engage in Disorderly Conduct, Criminal Trespass and Criminal Damaging because another has expressed pro-life beliefs and action. Such an attempt to chill free speech is shameful and manipulative,” she stated.

“For a group of self-described ‘militant abortion extremists’ to enter into private property with the intended purpose of disrupting and blaspheming a religious observance and disrupting a private event cannot and should not be justified by pointing to the actions of law-abiding persons exercising their First Amendment rights by peacefully protesting abortion,” the statement further read.

Like Carney and 40 Days for Life, GCRTL has high standards for those involved with the organization.

“GCRTL volunteers are held to extremely high standards of behavior, and any volunteer who does not abide by those standards is invited to either change his or her behavior or withdraw from our program,” Vanderkooi stated.

Evil is the absence of good

“This is the best time to be part of your local pregnancy resource center or local 40 Days for Life,” he said. “This is the most pro-abortion government in the history of the United States.”

Tweet This: “This is the best time to be part of your local pregnancy resource center or local 40 Days for Life”

“But the United States is not in Washington, D.C.,” he added. “It’s in neighborhoods across the nation. And our movement gets larger by the day. Today is more important than it has ever been.”

Passion for this movement has been with Hartshorn for many years.

When she’d heard the Roe v. Wade decision announced on January 22, 1973, on the radio in Columbus, she said she felt both shocked and called to “do something to fight the pro-abortion tide that was engulfing American culture.”

“That day changed the course of my life, and the lives of my husband and our two children, whose birth mothers later chose adoption over abortion,” Hartshorn said. “So, on that anniversary it is important for me to pray for those who have been affected by abortion and pray for our country and the pro-life movement.”

And now in 2021, the attack has left Hartshorn saddled with a feeling of sadness for our country and this generation.

“I feel sad that attacks on the sanctity of human life are so blatant, as are attacks on our freedom of religion, and that this has escalated to the point that the sacred spaces of our churches are being violated,” she said.

Disrespect for God Himself is increasing, she warned, adding that she knows hatred and anger are all around us.

“Evil is the absence of good, so we must bring good wherever we can,” she said. “Our mission for LIFE — centered in the Creator of life and focused on forgiveness and hope — is more vital than ever.”

Tweet This: “Our mission for LIFE — centered in the Creator of life and focused on forgiveness and hope — is more vital than ever”