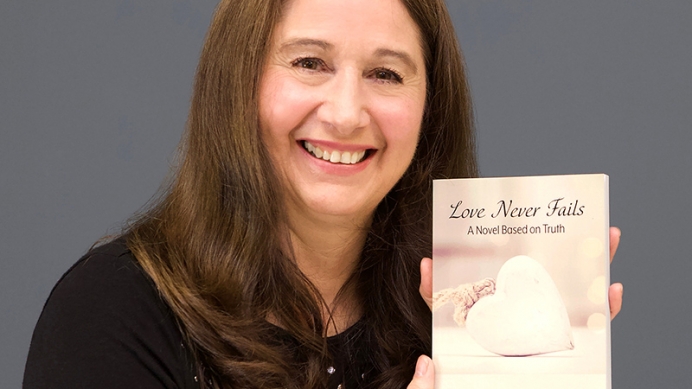 When Tesa Strasser took a creative writing class more than a decade ago, little did she know what doors one story would open.

Love Never Fails: A Novel Based on Truth has already touched many lives. Prior to its publication last December, Strasser led three “pilot classes” at a pregnancy center mom’s group and at her church. The feedback she received from both provided her encouragement.

“Some women (at the pregnancy center) were totally un-churched, others had a little church background—they were very receptive,” she said. “It was so fun!”

The novel follows school teacher Jen Clark, whose chance encounter with a former neighbor triggers a series of events that shakes her world and causes her to evaluate various aspects of her life. As she and other book characters face betrayal, grief, and other struggles, they also face opportunities of forgiveness and redemption.

Strasser envisions many uses for the book, including in women’s Bible study groups, book clubs, and at pregnancy centers.

“I want it to be a tool that gives women hope and leads them to Christ and to teach them to deal with things in a way God deals with things,” she said. “I would love to see the book used in parenting programs and one-on-one with their clients.”

Tweet This: "I want it to be a tool that gives women hope and leads them to Christ." #prolife

Strasser began volunteering at Pregnancy Choices in Canton, Ohio nearly 13 years ago. The center has four campuses, including one located near a Planned Parenthood. The work she and others do at these centers is critical, Strasser said.

“Women choose abortion because they believe they have no support, no choice,” she said. “We provide that support, through resources, services, etc. They leave knowing they do have a choice.”

Relevant to her volunteer work at Pregnancy Choices, Strasser’s book also explores the life of one main character who is post-abortive, an aspect which she believes presents an opportunity for healing from past abortion experiences. To help women access that opportunity, she shared her book at a local conference for women who have had abortions, selling many copies.

While many women might not attend a conference or an abortion recovery program, Strasser says, they might pick up this book and read it.

“They will read novels,” Strasser said. “It is helpful for a woman who needs the healing but doesn’t know she needs the healing. Also, I think it can help others become more sensitive to women who are post-abortive.”

Strasser had no inkling that the story idea, which sprouted during a class she took more than 10 years ago, would become a book used to help women today.

So she did—as a movie script. She spent six years trying to sell it; she even traveled to California, spending four days pitching the film idea—to no avail.

“I ended up having a temper-tantrum with God,” Strasser said.

Eventually, friends questioned the direction she was pursuing.

“I had three different friends ask me, ‘Are you sure this isn’t a book?,’” Strasser said. “I had never considered that. It all went very fast after that—it was very exciting!”

Even after finishing the book, Strasser said she “didn’t feel a sense of completion.” After more prayer and discussion with others, she decided to create a leader’s guide.

“I wrote lessons and made a Bible study, creating two lessons for each chapter,” she said.

Within each lesson readers find a Biblical insight into the topic of the chapter, such as betrayal. For that particular topic, Strasser uses the example of Joseph in the Old Testament, betrayed by his jealous brothers. After the Biblical application comes “Tesa’s Two Cents” (Strasser’s thoughts about that topic), a “Challenge” to the reader, and lastly a section called Dig Deeper, in which she provides additional Bible verses regarding the chapter’s topic. Each section of the lessons allows a reader to understand Biblical truths about issues relevant to them and to today’s culture.

One reviewer wrote, “I don’t like to read, but I couldn’t put this book down. I read the whole thing because I could relate so much to what was going on with the characters.”

Elaine Oliver, director of one of the Pregnancy Choices branches, also reviewed the book.

"The characters are very 'real,' and it is easy to relate to their story,” she said. “The Gospel is clearly presented."

Although her story idea didn’t see fulfillment for more than a decade, Strasser believes in God’s timing.

“I’m thankful for the opportunity to be used by God to bring forth a message of hope and encouragement that has such drastically-varied ways of being used,” Strasser said.