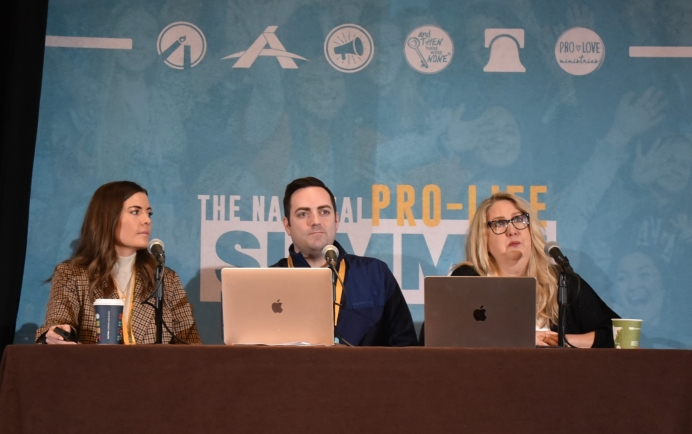 Students for Life of America panel discussion, What’s in the Water? Is Chemical Abortion Poisoning the Environment? Lisa Bourne

Chemical abortion pills account for more than half of all the abortions in the U.S., taking and negatively impacting lives in untold numbers. And while their use is on the rise thanks to ongoing push by the federal government and abortion activists for unfettered access, the danger they pose extends beyond the innocent lives they take in utero and the negative effects on the mothers who take them.

The U.S. government has been part of the push for abortion drug access since their advent on the market 30 years ago, a pro-life panel discussion said, and now the U.S. population at large is at risk because the dangerous chemicals and biowaste from abortions are being flushed into the groundwater.

“I think what people didn't understand was that chemical abortion pills would be a small cell that is now metastasized into a cancer that is going throughout our culture,” said Kristi Hamrick, vice president of Media & Policy for Students for Life Action.

Hamrick was part of a panel discussion at Students for Life of America’s (SFLA) 2023 National Pro-Life Summit titled, “What’s in the Water? Is Chemical Abortion Poisoning the Environment?”

Hamrick said she has closely followed the dawn of chemical abortion in the U.S., and laid out its basics, history, and current status, to set the stage in the discussion for how it is posing danger beyond those who willingly take the pills.

Hamrick told the panel audience that the future of abortion America is chemical abortion pills, even though the U.S. has no national abortion reporting law, which makes complications difficult to track.

She explained the two-drug process of chemical abortion, consisting of mifepristone, which starves the unborn child of nutrients to take his or her life, and misoprostol, which causes the mother to deliver her presumably deceased child.

“And they'll tell you that it's like having a strong period, but it isn't,” Hamrick said.

“Women who have them tell us; you might have one of these abortions but never had two. It's incredibly painful, and you are bleeding out sometimes for weeks and months. It's very significant.”

The percentage of U.S. abortions by abortion drugs is expected to increase to up to 94% in the next few years, she said

She detailed how, while FDA regulations say to not use the pills past 10 weeks in pregnancy, Planned Parenthood says it will sell the pills to 11 weeks, and the World Health Organization says they should be available to 12 weeks. Chemical abortion numbers are much higher in Europe, she said.

“Chemical abortion pills are dangerous if you use them properly,” Hamrick said, with four times the health risk of surgical abortions and 10 times the death rate.

Chemical abortions, also known as medical, of medication abortions, entail significant bleeding for the woman at home after she has taken the pills, as well as the specter of her seeing her child, even at times still alive, after she has delivered.

With the ongoing loosening of safety standards by the FDA, including removal of the in-person medical exam, and now pills available via mail and retail pharmacies, the drugs pose increased risk. Many women don't know how far along they are in pregnancy, ectopic pregnancy could go undiagnosed, which is likewise the case with the Rh-negative condition, and all add significant risk for the mother.

“It used to be that when they were selling these pills, you had to have an ultrasound to determine location and age, pregnancy, and you had to have a blood test to see if you were Rh negative for treatment,” Hamrick said. “Now, what they are saying is that they don't need to do that anymore, that's too much trouble.”

Additionally, she said, human traffickers and other abusers are using them as tools to use and exploit their victims. Further, international chemical drug traffickers are pushing one-pill regimens, which has around a 38% failure rate for starving the baby, again putting the mother at great risk and creating the need for surgical intervention.

Support for abortion is not an argument for online no-test distribution of chemical abortion pills, Hamrick stated, but that is what the Biden administration has deliberately set up.

“It is outrageous that the FDA is saying - we are willing to risk women's lives as long as the baby also dies,” she said. “Because that is exactly what they're saying by saying that you don't need to do an ultrasound or a blood test, that you don't need to ensure that a woman has full informed consent and is not being abused.

“I mean, there's no such thing about as DIY abortion unless you're also a DIY surgeon,” said Hamrick. “Let's be clear; I mean, what are you going to do, do a D&C in your bathroom? It's ridiculous. But when it comes to abortion, it's okay to kill women.”

Tweet This: There's no such thing about as DIY abortion unless you're also a DIY surgeon

This should have been enough to stop no-test online distribution of these pills, she said, because they expose women to injury, infertility, death, and abusers. But that hasn't been enough for the abortion industry and Biden administration.

And Hamrick said it raises questions: Where do all the aborted babies go? What happens next?

It was then, she said, that she really started to think about chemical abortion in terms of being the generator of medical waste.

Indiana and other states have infant dignity laws that deal with babies who are killed by abortion so that they are properly handled, Hamrick said, “But when it comes to chemical abortion, they tell you to go home and flush.”

Tweet This: But when it comes to chemical abortion, they tell you to go home and flush - Panel discussion on the environmental dangers of abortion pills

Zac Kester, general counsel with legal non-profit Charitable Allies, walked through the water cycle, and water treatment processes, and how drinking water, the water used for agriculture animals, and the water table are all interconnected.

It is more complicated than most might think, he said, and in fact, there is a lot of regulation about how the byproducts of wastewater treatment are utilized in our society and culture.

But this does not stop the disposal of chemical abortion drugs and the babies they kill into the water system.

With all the wastewater treatment steps; the filtering, the moving of different elements from one stream to another, bacteria and pathogens removed, metals tested for, disinfection steps taken, solids composted for agricultural use, and so forth, chemical abortion and its effects are allowed to be flushed.

There are two primary categories of biohazard waste, said Kester, and they are classified according to their level of risk to people and the environment.

Our organs are supposed to be disposed of in a certain way pursuant to regulation, he said. Placenta is on the list for infected wasted, so, it ultimately should be put through a high-pressure treatment process and buried two miles deep in the bedrock.

“Except when we flush them down the toilet,” Kester said. “Then we spread it on the field, and we eat it, and we drink it. This is chemical abortion.”

He noted that the 54% rate for chemical abortion in the U.S. is probably higher because California and New York do not report their statistics.

“And you and I are eating and drinking food fertilized with placenta and other substances from the uterus,” Kester said.

“And we are drinking water that has these chemicals,” he said further.

Aside from the biowaste aspect, chemical abortion drugs themselves pose risk after they enter the water system.

There are three active metabolites from misoprostol, said Kester, which means when they are discharged from the human body, they still perform the action that they were intended to perform when they were ingested.

“Folks, we are seeing skyrocketing rates of stillbirth of animals and livestock, cows, sheep, pigs, etc.,” Kester said. “We are seeing all kinds of farms in terms of ag yields going down. And there are many other types of environmental harms that we're seeing as well that we believe we can trace back to abortion.”

Students for Life's Director of Marketing Elise Neff stressed the importance of getting the word out about this additional abortion drug danger, detailing how the abortion industry has made chemical abortion confusing to downplay its danger and enable easier marketing of the abortion pill.

“Obviously, good marketing is deceptive and that's exactly what the abortion industry has done,” Neff said. “They deceive women into thinking these pills are safe, easy, quick solutions to unwanted pregnancy. And as you have heard, that is not the case.”

Attendees were invited to the SFLA website ThisIsChemicalAbortion.com for information and tools to raise awareness.