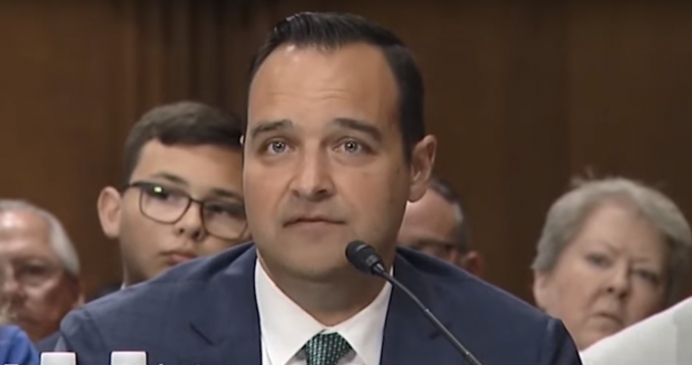 Andrew Bremberg, US ambassador to the UN in Geneva, testifies before the Senate Foreign Relations Committee on June 20, 2019. YouTube screen capture

(Catholic News Agency) The Senate’s confirmation Tuesday of Andrew Bremberg as U.S. Representative to the UN in Geneva drew praise from a pro-life leader, and condemnation from Planned Parenthood.

On Oct. 22 the Senate voted 50-44 to confirm Bremberg, assistant to the president and senior advisor for domestic policy at the White House, as the U.S. Representative to the Office of the United Nations and Other International Organizations in Geneva. Bremberg was nominated for the position by President Trump Sept. 28, 2018.

Marjorie Dannenfelser, president of the pro-life Susan B. Anthony List, said in a statement that Bremberg “will be a strong advocate for the cornerstone of all human rights, the right to life, and will stand up to the international abortion lobby at the United Nations.”

The position is an important diplomatic post, representing the U.S. in front of more than 100 international organizations on issues ranging from refugee resettlement to human rights, arms control, and the environment.

As a key advisor to the White House domestic policy, Bremberg had a role in crafting and implementing the administration’s expansion of the Mexico City Policy.

The Mexico City Policy, originally begun under President Reagan and reinstated by the Trump administration, bans U.S. family planning funds from going to foreign non-governmental organizations that promote or perform abortions as a method of family planning.

The administration’s expansion of that policy, Protecting Life in Global Health Assistance, applied the same funding prohibitions to $8.8 billion in global health assistance.

Bremberg was also the policy director for the 2016 Republican Party platform, which called for stronger refugee resettlement and immigration restrictions, said pornography was a “public health crisis,” and which was hailed by some pro-life leaders for its proposals to ban late-term, disability, and sex-selective abortions.

The confirmation was also opposed by 38 organizations in a letter to Senate Foreign Relations Committee Ranking Member Bob Menendez (D-N.J.) and Chairman James Risch (R-Idaho); the organizations included pro-abortion groups such as Planned Parenthood, Marie Stopes International, the National Abortion Federation, the National Institute for Reproductive Health, and the National Organization for Women.

“Mr. Bremberg’s record and confirmation hearing leave no doubt he will use the post of U.S. Ambassador to the United Nations in Geneva to strip away reproductive rights and LGBTQI rights around the world,” the letter stated.

At his confirmation hearing June 20 in front of the Senate Foreign Relations Committee, Bremberg faced tough questions on his views on abortion, LGBT rights, and refugee resettlement policy, among other problems.

Menendez asked Bremberg if he thought rape victims should be able to access abortions where it is legal to do so. “I don’t believe abortion is a moral solution to any problem,” Bremberg responded.

Tweet This: “I don’t believe abortion is a moral solution to any problem”

Bremberg told Sen. Jeanne Shaheen (D-N.H.) that he accepted “reproductive rights” as outlined in two international documents—the 1995 Beijing Conference Strategic Objective, and the Programme of Action of the International Conference on Population and Development—as “important rights.”

However, he added that the language in those international documents does not include promotion of abortion as a method of family planning.