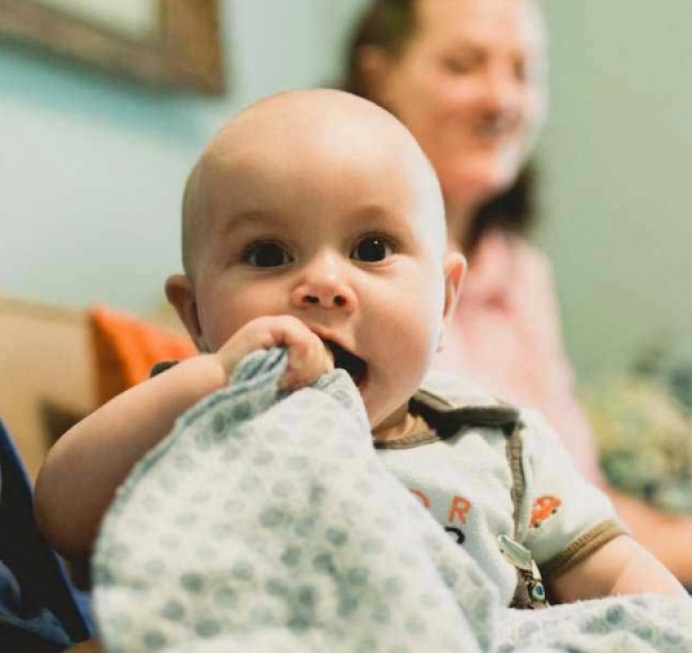 Beverly Kline founded Living Alternatives in 1982 in Tyler, TX, because a teenage girl who believed she was pregnant needed help.

The longtime pregnancy help ministry director recently stepped aside, ushering in a new era of leadership that will be augmented by her ongoing involvement and support.

Kline had discovered back then that the available resources for free pregnancy tests in that part of Texas led women to an abortion clinic.

With a vision to rescue women from the abortion clinic and help young women facing pregnancy with needed support, Kline began offering free pregnancy tests from her own apartment, advertising her own phone number.

Within months the demand was so great, Kline recruited volunteer help and upgraded the pregnancy help center into an office in Tyler, TX.

In 1983, Living Alternatives’ first maternity home came about through the purchase of a $15k fire-damaged home requiring $40k in repairs. Donations of money, labor and supplies made it possible to open the home which served 106 women over the next seven years.

The vision continued to move forward with adoption agency licensing being added in 1987 to serve maternity home residents who were asking for the ministry to help with finding Christian adoptive parents for their unborn children.

In 1993 Fatherheart Maternity Home was purchased. The home is located on 40 acres in rural East Texas, a 10,000 square-foot home, 10 bedrooms, 7 bathrooms and 2 houseparent quarters. Prior to this purchase, blueprints for a $500k large maternity home were made ready. Just before breaking ground, a door was opened to purchase the home with 40 acres for $300k. It was purchased on a five-year note but was paid off in just three years.

Fatherheart Maternity Home typically houses 12 young moms for effective ministry but has capacity for 20. The future vision includes plans for an additional home for women with multiple children as well as aftercare for their newborns. Another large home for minors is also on the horizon for the 40-acre property.

In 2010 the judge of the family court in Smith County asked Living Alternatives to help find adoptive homes for children who were free for adoption but languishing in foster homes. Utilizing their adoption license and working closely with the judge, 112 children, ages 4-16, found their forever homes through the ministry.

The year 2010 also brought the launching of KEEPS ministry based on Genesis 28:15 which provides a uniquely designed boutique and shopping experience for teen girls who reside in foster home or foster facilities.  Much like the pregnancy test, the Boutique provides an initial encounter to meet the felt need of lonely, confused teen girls who need to know their value and worth.

The Pregnancy Resource Center (PRC) is the initial contact with the majority of clients. Located across the street from the Tyler Junior College, the now 38-year-old ministry provides 120 free pregnancy tests and 70 sonograms per month.

On July 6, 2020, Steve Roquemore became the executive director of Living Alternatives. Kline now enjoys holding the title of founder and former executive director, still offering her support and energy to the ministry.

Roquemore was given a vision to lead men to understand their failings which led to abortion becoming legal in the first place. In his mind, fatherlessness has been a primary issue driving women to abortion.

“Men have not been there for the women we have impregnated,” said Roquemore. “Because men leave women alone to face the situation, using the lie our enemy tells us, which is this isn’t our choice or decision.”

Well before accepting the position at Living Alternatives, Roquemore had written about and spoke frequently about the “Father Heart of God” promoting responsibility among men. Believing men are called to be providers and protectors, Roquemore advocates for men to take the lead in changing the abortion narrative.

“The choice begins in dating, prior to conception. Then you make a commitment in your heart to not touch a woman until you are ready to commit to her for life,” stated Roquemore. “If you do mess up and bring a life (unplanned) into the world, you make a commitment to fulfill your responsibility for that life.”

For a year Roquemore met with a group of men for “Courthouse prayer” where once a week the group met for an hour and prayed for repentance in the heart of men in regard to abortion. The group embraced Malachi 4:5-6 asking God to turn the hearts of the fathers to their children.

“We also noted in this group how the genealogy of Jesus Christ lists the fathers in Matthew 1, which I believe calls men to be the difference,” stated Roquemore. “If men repent for their sin and return their hearts to their children, repent for their own sin, we will turn the tide of abortion.”

“Genuine faith and hope in the heart of this issue comes down to the missing key which is the involvement of men,” continued Roquemore. “When they step up and take responsibility, it will unlock the door. Laying down their lives to serve women, I am calling on men to support this ministry.”

Tweet This: “Genuine faith and hope in the heart of this issue (abortion) comes down to the missing key which is the involvement of men”

So passionate about this vision, Roquemore has hired another young man on the staff recently as well, as his concerted efforts have been to ask men and men’s groups to support the ministry in funding and praying for it.

The Axia (Greek for value, worth and dignity) Center, which houses the PRC and other outreach programs, is fittingly named as Roquemore and the staff seek to reach out with a vision of hope to young women and men. Outreach at the Axia Center includes: Building Blocks, Stay-In-Touch Program and Childbirth Services which provides free doulas (birth coaches) and on- going child-birth classes.

Future visions also include a mobile unit so Living Alternatives can extend services into Athens, North Tyler and other locations. This project will be in conjunction with Save the Storks. They soon hope to add STI testing as well.

A local chapter of the Knights of Columbus donated a sonogram machine to Living Alternatives. When a gentleman involved with that organization stopped in Roquemore’s office, he could not resist sharing a victory story with him.

“We had a young woman stop in requesting an ultrasound, who was actually just scheduled for a pregnancy test,” Roquemore told the man. “We had an opening, so we moved forward with the sonogram and when the young lady saw her baby in the ultrasound she began to weep. As she met with the advocate in the next room, she continued to weep saying she had every intention of having an abortion, but now she would not. We were able to get her started in our Building Blocks program and continue working with her.”

As Roquemore concluded the story, the 6’5” gentleman began to weep. Truly the power of saving lives simply by being used by God to advocate on behalf of the unborn is overwhelming.

Roquemore is passionate about his new calling. He is focused on a great vision of God bringing redemption to our country starting in the hearts of men as they embrace the vital calling of fatherhood.