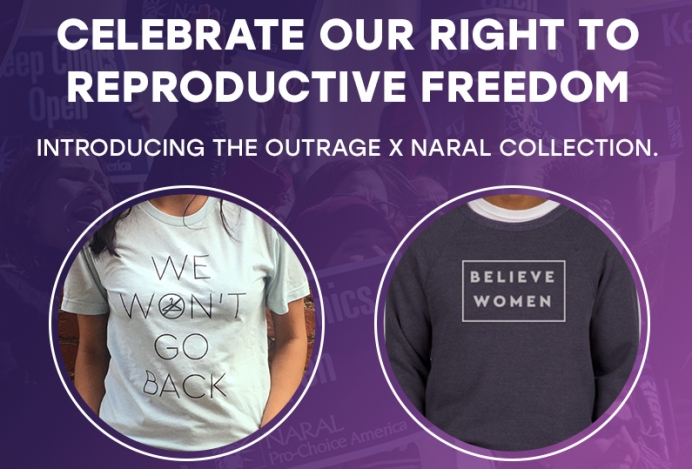 NARAL's "Outrage" Clothing Line Makes it Official: Big Abortion is Out of Ideas

Out of gift ideas for that special someone this Valentine’s Day? The abortion-promoting ghouls at NARAL have you covered.

“Outrage,” which was rolled out in January to commemorate 45 years of legalized abortion on demand in the U.S., includes t-shirts, buttons, postcards and more.

Naturally, all proceeds go to increasing American abortions through Planned Parenthood and the ACLU.

The sloganeering featured on all Outrage products range from vacuous—“Believe Women”—to tasteless—the word “Abortion” framed in a heart.

Most notably, the line includes a t-shirt with "We Won't Go Back" and a coat hanger, drawing upon the myth of thousands of women dying annually from so-called "back-alley abortions" made up by founders of NARAL, including the late Bernard Nathanson, who later admitted to spreading the misinformation. In reality, 90 percent of illegal abortions carried out prior to Roe were done so by doctors, according to Planned Parenthood in 1960.

Each, in its own way, is a perfect depiction of a bankrupt and ugly ideology that has robbed over 60 million Americans of their lives since seven men sealed their fate in Roe.

With millenials rejecting abortion more than any previous generation—a phenomenon highlighted in Thursday’s Washington Post—NARAL marketing ploy isn’t likely to buy them the traction it’s hoping for, at least not among its clear target demographic.

That’s bad news for abortion extremists, which—per usual—translates into good news for everybody else.