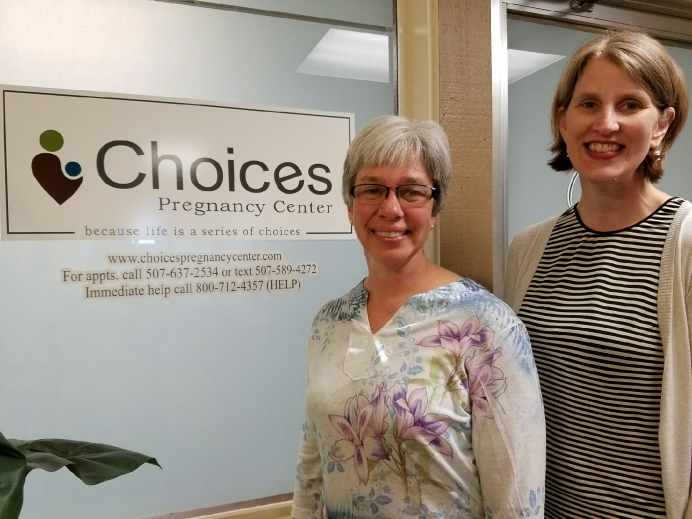 When executive director Karen Boots of Redwood Falls, Minn., leaves her keys on the desk of Choices Pregnancy Center for the last time, she will be placing a legacy of life-changing service into the hands of her successor, Carrie Meyers, a mother of nine from nearby Olivia.

Boots has worked nearly 25 years to affirm life amid a cluster of rural townships in southwestern Minnesota. In that time, she has done much more than triple the size of her center from two small rooms to a six-room suite with private restroom.

She has welcomed hundreds of individuals and families who arrived fearful and directionless, and walked with them into new hopes and dreams.

Soon after launching the center on Jan. 25, 1993—three days after the 20th anniversary of Roe v. Wade— Boots came to realize the majority of her clients were abortion-vulnerable, desperately in need of help in multiple areas of their lives.

“Initially, we were primarily dealing with pregnancy tests and that initial crisis situation,” Boots said. “And that wasn't fully meeting the needs in our community.

“Pregnancy tends to be just one more thing in our clients’ lives. If we only focus on the pregnancy, we're helping them quite a bit. But if we can broaden that and help them learn skills to address other life challenges, then we've done a whole lot more for them.”

“Because Life is a Series of Choices”

To meet longer-term needs, the center added an Earn While You Learn parenting education program in 2002, two years after rebranding to “Choices” Pregnancy Center and dropping the “Crisis” label.

“Adding Earn While You Learn, which teaches about childbirth and pregnancy and parenting, gives us a chance to continue to meet with our clients on a regular basis so we can help them through life situations,” Boots said. “That has made all the difference in the world for the effectiveness of our services.”

Yet, as the center’s tagline notes, “Life is a series of choices.” Clients needed still more help.

Community services for couples and individuals like those Choices saw—most of whom lived at or near the poverty line—were already stretched thin. There were virtually no mentoring programs, and clients suffered from a dearth of positive role models. One man told Boots the only father figures he knew “either were in jail or should be.”

Looking for a long-term solution to help educate clients, Boots attended a workshop focused on Life Coaching at Heartbeat International’s 2015 Annual Conference. Boots then arranged for herself and Gwenn Harrington, Choices’ Earn While You Learn Coordinator, to receive training toward certification as Life Coaches.

Since then, Harrington and Boots have been using “coaching questions” in all their client interactions.

Tweet This: New leader for #Minnesota #prolife ctr a mother of 9

“Even while we're doing a pregnancy test, we’re handling that much differently than we used to,” Boots said. “We ask questions that help them look at their own values and how their choices line up with those, rather than just feeding them information we think they need to have.”

The center’s addition of Life Coaching services keeps clients coming back even after going through the  initial stages of parenting.

“Several of those clients have worked with us through the Earn While You Learn program and want to continue working through other issues going on in their lives,” Boots, who will continue coaching clients following her retirement, said. “Sometimes it's relationships, figuring out education, how to deal with family struggles, or financial issues. They come for all kinds of things.”

Since July 5, Boots and Meyers have been working side-by-side, a training-transition period they describe as running in the baton transfer lane.

The task of inheriting a fully operational nonprofit has required Meyers to get up to speed quickly.

But, Meyers is used to facing challenges. While raising her children and serving alongside her husband, Henry, who pastors Grace Community Church in Olivia, Meyers finished her college degree in Human Services in 2013—all nine of her children cheered as she crossed the stage at Iowa Wesleyan University to receive her diploma.

On top of Meyers’ education and management skills, Matt Buckley, chairman of Choices’ board, said the depth of the new director’s faith made her a natural choice to take over for Boots.

“One of my hopes for the future of Choices Pregnancy Center under Carrie's leadership is that we will be able to continue to fulfill our pro-life mission and hold out our pro-life message under increasing pressure from our government and society that are pushing a message and culture of death,” Buckley said.

The nature of that pressure came home to Meyers via online webinar in early July, when Meyers took a Heartbeat Academy course on recognizing fake clients.

“It's important to be sure that we are doing everything properly and legally, so we are operating in a way that makes us less vulnerable to attacks of various kinds,” Boots said. She spent months prior to Meyers’ coming in leading Choices through a legal review with Heartbeat International, as well as updating all policy and procedure manuals.

In addition, Boots applied for and received a scholarship for Meyers to attend Heartbeat’s new director training at Pregnancy Help Institute, July 31 to Aug. 4.

“She's going to start in a better position than I did,” Boots said. “When I was the new director, we weren't connected with Heartbeat yet, so I never got to take the training.”

The summation of Boots’ legacy will dovetail with the beginning of Meyers’ when the public comes to say farewell to the retiring executive director and welcome the new one during an open house Aug. 28.

When asked about Meyers’ legacy, Nancy Haapoja—one of Choices’ original board members and chairman of the search committee—said Choices’ owes its reputation in the community to its long-time director.

“I hope we will continue with the rapport Karen has established with the public, and also make Choices more visible and available to our surrounding communities such as Olivia—Carrie's home—building on her connections there.”

Given the distance Boots has run with Choices Pregnancy Center over the past 24 years, Meyers and her team are now in good position to carry the baton out into those communities with life-changing results.