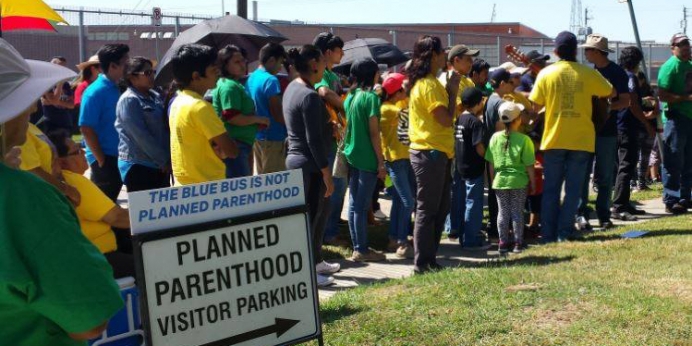 “We call it a crisis pregnancy center because it’s parked next to the largest abortion facility in the United States,” Christine Melchor, Executive Director of Houston Coalition for Life, said.

In February 2011, her organization began operating the Big Blue Bus, a mobile unit that provides pregnancy testing and ultrasound for the women of Houston. The bus parks near Planned Parenthood Gulf Coast, located near universities and the freeway.

“I think they thought they picked the perfect location—there was no place for a pregnancy center nearby,” Melchor said. “There was really no property that was for sale around there.”

Houston Coalition for Life waited about eight months after Planned Parenthood moved into its new facility in 2010, hoping one of the three dozen local pregnancy help organizations in Houston would be able to make a footprint in by the abortion giant.

“It hit me like a ton of bricks. God was saying, ‘Why are you waiting?’” Melchor recalled. “We’re the folks on the street anyway: maybe we should be the ones to do something. I had heard about a mobile pregnancy center and so I researched it … (and) we decided to go for it. When I put the information out to the pro-life community in Houston, they really stepped up.

“It happened much faster than I dreamed,” she added. “We just totally turned it over to God.”

Fundraising events and partnerships allowed the Coalition for Life to purchase a New Jersey transit bus that was retrofitted to become a clinic. Big Blue, as it’s called, serves eight to 22 women a day during the six days a week the mobile pregnancy center operates.

A second unit, nicknamed Baby Blue, was added in November 2014. This mobile clinic, a renovated RV, serves the community two days a week.

Since the first unit hit the streets more than four years ago, 8,688 women have been served with more than 3,600 having positive pregnancy tests thanks to the tandem of life-saving vehicles, Melchor said. More than 3,300 of those women continued their pregnancy.

“Ninety percent or better of the women that come in who are pregnant are continuing their pregnancies,” said Melchor. “We know that 9 out of 10 pregnant women that go into Planned Parenthood choose death for their baby, choose abortion. It’s the grace of God combined with the picture of their baby… We’re so pleased!

“We do extensive follow-up with these women,” she added. “If we can’t get a hold of them, we don’t count them as continuing their pregnancy.”

Melchor, part of the team of registered nurses trained in ultrasonography who staff the mobile units, has led Houston Coalition for Life since its inception in 2002.

“We were the grassroots organization on the street. We partnered with churches in the city to pray outside the Planned Parenthood abortion facility in Houston,” Melchor said.

Just getting the buses on the streets of this large Texas city is not the end of the road for Melchor and her organization. During summer, they moved into an office in a brick-and-mortar location, and they plan to offer pregnancy tests, ultrasound, and an Earn While You Learn program from that location.

“Our idea of the Big Blue Bus was that it would be the half-way point between our Planned Parenthood and another pregnancy center,” Melchor said. “But we started seeing so many women and the pregnancy centers are so busy themselves, they couldn’t accommodate all the women we’re seeing. So we decided to go forward with our own free-standing pregnancy center where we could continue to offer these women more help.

Tweet This: Women have #prolife options in #Houston just outside of #PPAct #abortion mega-center.

“We moved into our new office in June, but we’re still in the process of preparing it, so we haven’t opened it yet,” she said.

Plans are to officially open after the new year, Melchor added.

Other future endeavors for the group include getting the second bus on the road full-time, the six days a week the doors to the city’s abortion clinics open—there are six in the Houston area, down from 11 four years ago, according to Melchor. Houston Coalition for Life also hopes to hire another nurse and an assistant to operate the smaller bus.

What advice does Melchor have for other life-affirming organizations considering a mobile unit?

“Start with prayer,” she said. “Once you know that it’s something you want to do, just get started. Put one foot in front of the other. Do your research, put the information out to the community, and do special fundraisers.”

Once the unit joins the 100-plus mobile units on the road in the U.S., Melchor has some follow-up wisdom to share as well.

“Pick a spot and go there on a regular basis,” Melchor said. “If you move around so much, you won’t see as many women. They feel more comfortable when they see you at the same place day in and day out.”

Operating the two mobile units and managing an office takes a combination of staff and volunteers, Melchor underscored. Houston Coalition for Life has received strong community support, both in terms of staffing and for their fundraising and prayer events. Moving forward will take that continued support as well as garnering more knowledge.