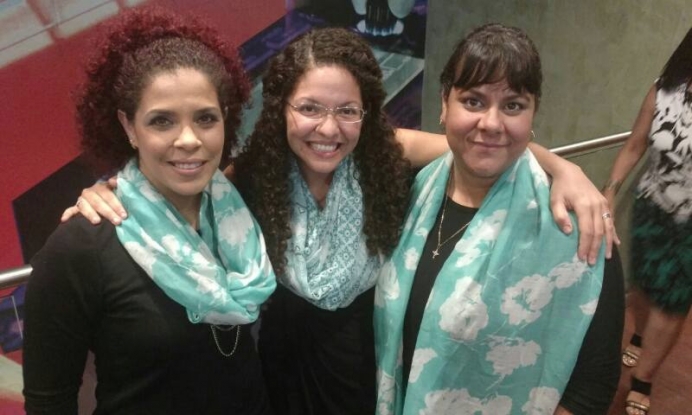 "Victoria" at her baby shower, celebrating with the two women who helped her choose life for her child. Photo Courtesy: Joseph and Daisy Pardo

But in the meantime, they’re celebrating the closure of two privately owned abortion businesses in early 2017, as well as an upcoming birth for a young woman with a remarkable story.

The Pardos direct the first stand-along pregnancy help center in Puerto Rico, having relocated their family of six from Tampa, Fla., in the fall of 2015. Until recently, their center, Cree Women’s Care, had been situated within just a couple hundred feet of two abortion clinics on a one-way street.

Now, just one remains. In early January, abortion practitioner Santiago Diaz abruptly shuttered both his clinic next door to Cree and his second location, which had operated directly in front of the main hospital in San Juan—and right next door to its abortion industry competitor, “Clinica Iella,” a local affiliate of the International Planned Parenthood Federation (IPPF).

Just three days after his inauguration, Jan. 23, President Trump reinstated a policy that keeps $100 million out of the hands of IPPF as part of the broader protection of $607.5 million in overseas funding that now cannot go toward international organizations that promote or perform abortions.

That action, the Pardos hope, makes Clinica Iella the next clinic to put up a “For Sale” sign in the window.

“This is one of the busiest abortion clinics on the Island,” Daisy Pardo said, pointing out that Clinica Iella is known locally for its use of the RU-486 abortion pill regimen. “[The Mexico City Policy] is going to, we pray, directly affect this clinic, so that we can go down to six abortion clinics in Puerto Rico. That’s what we’re praying, because they do receive the funds from International Planned Parenthood.”

Beyond San Juan: A Community in Action

Made aware of the 17,000 abortions that take place in Puerto Rico each year, the Pardos strategically chose to locate their ultrasound-equipped medical center within a mile of three abortion clinics, in Bayamon, near the capitol city of San Juan.

While the Pardos’ long-term vision is to establish life-saving pregnancy centers next to every abortion clinic in Puerto Rico, they’re already seeing a wide-reaching impact of the pro-life community in action.

In October 2016, while they were visiting supporters in Tampa, Daisy took a call from a young woman in Ponce, an hour and a half drive to the opposite side of the island from San Juan. At first it didn’t seem that the woman—who was four months pregnant—was considering aborting her baby, but as the two kept in contact, it became apparent she felt like abortion was her only option.

“This really burdened me, so right then and there, I wrote this long email and talked to her about fetal development, abortion—what kind of an abortion she would get at this point in the pregnancy—and adoption and our services,” Pardo said. “I also gave her direct contacts so she wouldn’t feel it’d be hard thing to get through to someone.”

Facing the threat of homelessness and abandonment from her family, the young woman ended up booking an abortion a day later, but thankfully, she let Pardo know what she was planning to do late the night before.

The next morning, Pardo called her to see if they could have one last conversation before the abortion. The woman, “Victoria,” answered her phone from inside the abortion clinic waiting room.

“I was thinking, ‘Oh Lord Jesus, I’m in Tampa. Why?’” Pardo said. “This was on the other side of the Island, so it’s not like I know a lot of people there. Even though I was born there, I left when I was young and most of my friends are in the U.S. already, so I just don’t have a lot of contacts yet.”

When Victoria agreed to meet up with someone face-to-face prior to going through with her abortion, Pardo reached out to a Ponce-based ob-gyn and pastor she had only met briefly. Still, he was the best hope for Pardo—and Victoria—going forward.

One problem: the doctor was in Orlando when he answered his phone.

But, while he couldn’t meet Victoria at the abortion clinic, he knew a woman in his church who would be willing to help. In the meantime, Pardo reached out to a friend she hoped would know someone in Ponce as well.

Before long, two women who’d never met each other—or Pardo—and who hadn’t been trained to work in a pregnancy center, left their workplaces and were en route to meet up with Victoria at the clinic.

“So when she gets out of the abortion clinic, there’s these two girls,” Pardo said. “They met with her at a Wendy’s—yes there’s Wendy’s in Puerto Rico—and they just go, ‘The Lord loves you so much. You are not aborting this baby.’ They prayed with her and asked her what they could do to help her, and she just felt God working.

“She sent me a text message saying how powerful the conversation was. She said, ‘I just want to thank you so much for what you and your friends have done.’ I thought it was hilarious because she said, my ‘friends,’ but I don’t even know them. She said, ‘I don’t know what I would do if you were not there.’”

In January, Pardo finally had the chance to meet her two “friends”—one a teacher and one a worker at a nursing home—at Victoria’s baby shower in San Juan.

Though the past few months were a trying time for Victoria, she’s seen a turnaround in her relationships with key family members, including her mother and grandmother, who were both there at the baby shower as well.

“One of Victoria’s fears was that she would get kicked out of her home, and her grandparents did do that,” Pardo said. “But God was so good. He has used this to reunite her with her biological mom and restart a relationship with her. They were all there at the baby shower: the grandma who kicked her out, the mom who received her, and everybody who was there for her at the moment. It was a very sweet time.”