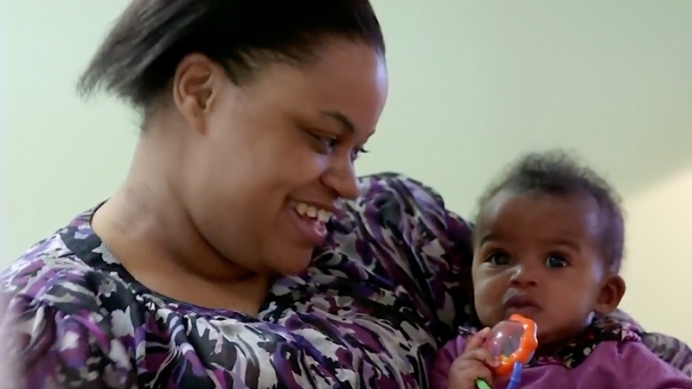 Megan knew she couldn't abort her baby, but she also wasn't sure about parenting her. Pregnancy Center East in Cincinnati would show her a third way through adoption.

Megan: An Adoption Story from Cincinnati

When Megan found out she was pregnant, she cycled through a range of emotions: embarrassment, sadness, anger, and mostly loneliness.

Rejected by her unborn child’s father, Megan turned to the only option her family pushed her towards: an abortion.

But as Megan, a single mother of two young boys, listened to the Planned Parenthood abortionist describe “scooping” out her unborn child, she knew she couldn’t go through with it.

“I thought about my boys and I knew I didn’t want to do that to the baby,” she said in a new YouTube video put together by Pregnancy Center East in Cincinnati, Ohio. “I knew that there had to be another choice.”

Pregnancy Center East would help her discover that choice—adoption, supplying her with the information and support she needed to make it.

Pregnancy Center East introduced Megan to Cheryl, an adoption professional who would be one of the three people at the hospital the day her baby was born. The other two were the adoptive parents. Though none of her family showed up, the day was a happy one.

“I don’t even know who cried first,” Megan said. “But I know that it was a joyous moment.”

This weekend marks not only Mother's Day on Sunday, but also the lesser known Birth Mother's Day, which celebrates mothers who have placed their babies for adoption, on Saturday. Though U.S. adoptions have fallen significantly over the last few decades, thousands of mothers like Megan make adoption plans every year. In 2014, 18,000 infants under the age of two were placed for adoption.

Tweet This: This Birth Mother's Day, let's celebrate moms like Megan who make the brave decision to place their babies for adoption. @ktafranklin @PregCenterEast

Considering the fact that Planned Parenthood performs 82 abortions per every adoption referral, it is sad but unsurprising that Megan couldn't find adoption help at the local Planned Parenthood. Instead, Pregnancy Center East provided her with the support she needed to make the best decision she could for her baby. As it turned out, making an adoption plan for her child led to a better life for herself as well.

"I do think that baby was meant for [the adoptive parents]—it was meant for all of us really," she said. "Because it helped me grow, it stopped me from beating myself up to picking myself up. I started believing in myself after everyone else was."

Watch the full video above for the rest of Megan's story.