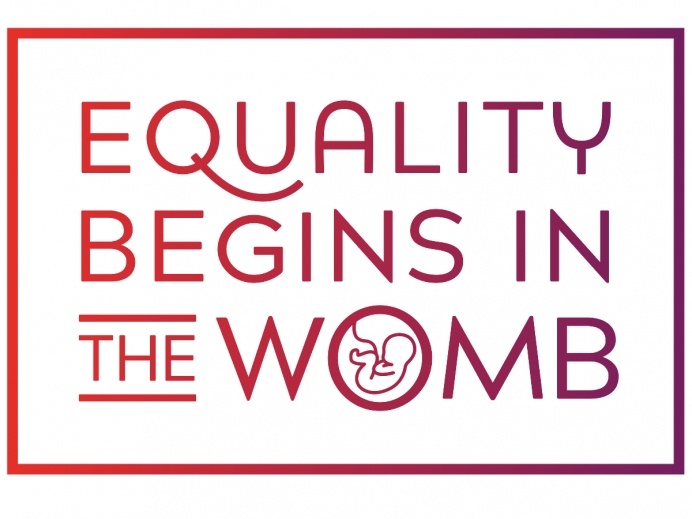 March for Life taps equality of unborn life for 2022 theme

Equal rights being at the forefront of the culture wars and a highly anticipated abortion case before the Supreme Court are punctuating this year’s theme for the March for Life.

“Over the course of the past few years, from the halls of Congress to our dining room tables, Americans have been discussing the meaning of equality,” March for Life President Jeanne Mancini said. “The term it's invoked often, but it's rarely defined.”

And while nearly everyone seems to agree that equality is important, she said, there's little agreement on the definition of equality, to whom and how it applies, particularly regarding important policy questions.

It is with that in mind that the March for Life theme “Equality Begins in the Womb” was chosen, she said.

“We want to expand this rigorous debate about equality to include unborn children,” Mancini said, “who are often overlooked because they cannot speak for themselves.”

The 2022 March for Life theme was announced Wednesday via Facebook live stream in and event hosted by the Heritage Foundation that included panel speakers Grazie Christie, Carrie Severino, and Ryan Bomberger, each offering perspective on equality for life in the womb. The March for Life took a very different form in 2021 from its many previous years amid coronavirus restrictions and unrest in the U.S. Capitol, with leaders from pro-life groups convening in place of the several hundred thousand pro-life pilgrims who typically take part. Organizers are proceeding with a 2022 event as in years past.

“Injustice anywhere is a threat to justice everywhere,” she said, “including in the womb.”

Tweet This: Hoping to include the unborn in the debate over equality, the 2022 March for Life theme is “Equality Begins in the Womb.”

Heritage Foundation President Kay C. James introduced the event with a story illustrating her start in the pro-life movement, when as the mother of a young son she had received a call and was asked to debate the life issue with a Planned Parenthood representative.

James said she “stepped into the fray” prompted by her son whom she’d promised earlier that if given the opportunity, she would use her voice to fight to bring an end to abortion.

Taking her children to the March, having them understand what it meant to care about something deeply, and then go and March for what they believed in was significant to her family, she said. “And I believe that there was an entire generation of young people who have been inspired by the March for Life.”

The March is especially important this year with the upcoming Dobbs v. Jackson Women's Health Organization case before the Supreme Court, Mancini said.

Knowing the culture is upstream of politics, she said, the prayer is that with this year’s theme, the debate would include the unborn child, with hearts and minds changed, resulting in laws being changed so that unborn child will be legally protected in the U.S.

Christie, a radiologist, regularly sees obstetric ultrasounds. She said the unborn are due the same respect as those outside the womb.

Christie and two other female physicians, a neonatologist, and an obstetrician, submitted an amicus brief in support of the Mississippi Gestational Age Act in the Dobbs case. The Mississippi law bans abortion at 15 weeks with some exceptions. The case hinges on the constitutionality of limits on abortion before viability. Dobbs is being watched for its potential to upend Roe v. Wade

“I believe that whether they're inside their mothers or outside, premature or full term, they all deserve our care and protection equally,” said Christie.

The humanity of the child in the womb is much more apparent with ultrasound technology now than years ago, she explained, and these lives should not be considered disposable.

They are clearly human, she said, clearly alive, no longer hidden from the eyes and knowledge of man, “but visible in all their amazing humanity,” and “equal in dignity equal and importance.”

Carrie Severino, chief counsel and policy director of the Judicial Crisis Network, spoke at the live event. Having clerked for Justice Clarence Thomas, Severino discussed the difference in the types of protests one sees at the Supreme Court.

Two events involving the court were always a little different during her time there, she said.

One was a group of students that every day would be standing at the front of the Supreme court,” Severino recalled. “And they would have a piece of tape over their mouth that said, “Life.”

“And they were just praying there,” she said. “And I remember thinking as I walked past every day, in and out of the building, “just think of the dedication and the prayers that were sustaining this movement.”

The other event was the annual March for life, said Severino, which was just “a tsunami” of people.

This term, with the Dobbs case, the court has an opportunity before it like none than it has ever had before, she said.

This is because the 15-week restriction represented in the Mississippi case is within where the average American is on abortion, she said.

Polling may be presented to indicate that most Americans support abortion. However, Severino said, “if you drill down and ask them what they really think, you realize that most Americans actually have an instinct that, you know, after the first trimester, we don't want abortions going this late.”

“People recognize that this isn't something that we want to see happening, she said. “At the very least at a late stage in pregnancy.”

With a majority of Supreme Court justices who believe the Constitution must be interpreted according to its original understanding and meaning, she added, and no aspect of the Constitution prohibiting any limitations on abortion, an overturning of Roe and Casey would be the correct legal result.

The Supreme Court will have already heard the Dobbs case by the time the March for Life happens, Severino noted, but experience says that's not necessarily the last word.

She pointed out that the front of the Supreme Court building bears the inscription, “Equal Justice Under Law.”

“So, I think if we can keep this focus on the significance and the equality of the child in the womb, and keep praying, keep working and keep fighting for this issue, hopefully we'll have some good news in June that will move us in the right direction,” she said, “and continue to promote that equality under the law that the Supreme Court is supposed to stand for.”

Radiance Foundation founder Ryan Bomberger said that the theme Equality Begins in the Womb has deeply personal meaning for him, as someone who “should have been aborted” because his life wasn't considered equal to others.

Bomberger was adopted into a family with 15 children, 10 adopted.

“Most of us were unplanned,” he said. “Most of us have either physical or learning disabilities, but none of us were unwanted. Thank heaven. Our worth is not predicated on our wantedness.”

Bomberger’s birth mother was raped but made the heroic choice to give him life and place him for adoption. His adoptive mother was disowned by her father because of Bomberger’s race.

“When my parents adopted me, all he saw was my color,” he said. “So, my mother literally lost a father in order to gain a son.”

“And this is something that is so ingrained in my heart,” he said, “that we are all just one human race. Color isn't what binds us - love is.”

Every human is a person, and every person is a human, said Bomberger, and every human life has equal and irrevocable worth.

“What a better, stronger, and more loving society will become when we embrace the truth,” she said. “That equality begins in the womb.”

“The March is a somber anniversary where we are reflecting on the past that we've lost 62 million Americans to abortion and are trying to change hearts and minds and laws,” Mancini said. “And yet there's a joy to it because we know that we're fighting the human rights abuse of today and all of the young people that are there, there's such a positivity.”