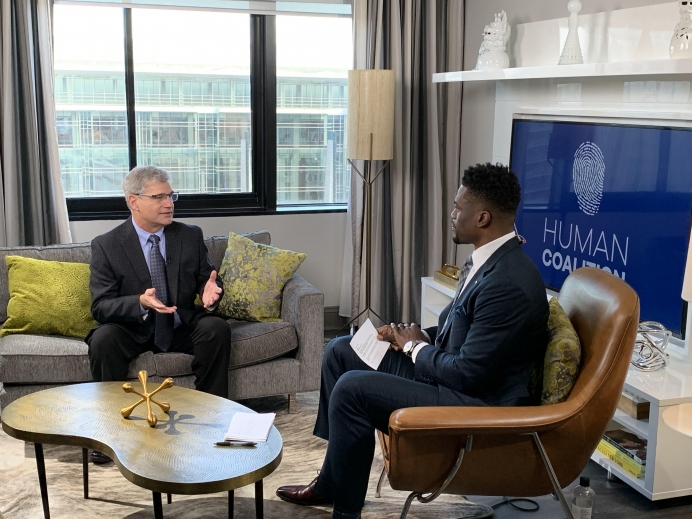 The prospect of overturning Roe v. Wade has generated excitement in the pro-life community, but even with that possibility on the horizon, pregnancy help will proceed no matter what. This was the message the leader of the world’s largest network of pregnancy help offered to a pro-life group as the 49th annual March for Life was poised for kick-off.

“It's been an amazing year, really,” Jor-El Godsey said, “to see the transition going from what we thought was going to be a very difficult season. Even just a few years ago, we had no real sense that Roe was even possible to overturn.”

Godsey, the president of Heartbeat International, sat down with former NFL football player and pro-life advocate Benjamin Watson for Human Coalition in a conversation the morning of the March on Jan. 21.

Godsey discussed the excitement felt right now in the pro-life movement as the Dobbs v. Jackson Women’s Health case is under consideration at the Supreme Court, and a ruling on which could mean the end of Roe. The conversation also touched on Heartbeat’s work and the importance of reaching women in need as chemical abortion is on the rise, especially by offering the life-affirming Abortion Pill Reversal protocol.

“And then just a few years have gone by, and suddenly we are energized,” Godsey said. “There's an excitement amongst the pro-life community at what could happen (in terms of overturning Roe).”

It’s not known what will happen Dobbs, he said, “but we have great hope for what's going to happen in June as they announce the Dobbs case.”

Dobbs concerns the Mississippi Gestational Age Act, banning most abortions at 15 weeks based on fetal pain. The case is regarded as the first formidable threat to the 1973 Roe decision legalizing abortion I the U.S. throughout pregnancy, thus the excitement in the pro-life community.

“And it's going to be, I think, at the very least a release from a bondage that our nation has been under,” Godsey said, put upon us by Roe, and then followed up by Casey, which was 1992.”

So, it’s been 30 years of the law of the land meaning the inability to really do more than help women make other decisions than abortion, he said.

“We operate OptionLine.org,” said Godsey, “which is a 24/7 365 call center that's answering calls from around the country.”

“We get about a thousand calls and chats every single day, “Godsey said, “and we direct them to pregnancy help organizations in the communities that the callers are calling in.”

This also connects the Abortion Pill Rescue® Network (APRN), he said, which is managed by Heartbeat.

“This is where we're seeing, as all of us are seeing, and certainly in the news, is the growth of chemical abortion in our land,” Godsey told Watson. “It's been on a major exponential increase for the last 10 years, even though it's been around for 20 years.”

Estimates have chemical abortion approaching half of all abortions performed in the U.S.

“There's a very intentional shift by Big Abortion to move the abortion issue to a pill form basically and delivering it through the mail," he said. "So, we're seeing that, we're answering those calls.”

And for some of the women who actually have started their chemical abortion, Heartbeat and the APRN have been able to help them reverse that abortion, he explained, if they call fast enough. Seventy-two hours is the window, but about 85% of them contact helpline within the first 24 hours.

“Some even contact us right from the very parking lot of where they received the abortion pill,” said Godsey. “They took it inside. They go back to their car and there's this sudden question in their heart about what did I just do? And we get to talk to them and they're looking for other options.”

“And that's where we present the option of Abortion Pill Reversal,” he said, “which is just progesterone. It's something that the mom's body is already producing to sustain in that baby.”

“And so, we get to help them,” added Godsey. “And as many as 70% of them have been successful in reversing that abortion.”

Heartbeat, OptionLine and the APRN have had to adjust the conversation to be more immediate with the shift to mail-order abortion pills, Godsey explained.

“We're always ready to answer her when she calls,” he said, “but what we're realizing is her window is closing and she's feeling that pressure even more to make that decision and make it immediately.”

Tweet This: “We're always ready to answer her when she calls” - Heartbeat International President Jor-El Godsey to Benjamin Watson re: pregnancy help

Chemical abortion allowing access to the abortion pill her so swiftly without medical oversight means the window of opportunity to help her see that there are other options is closing faster.